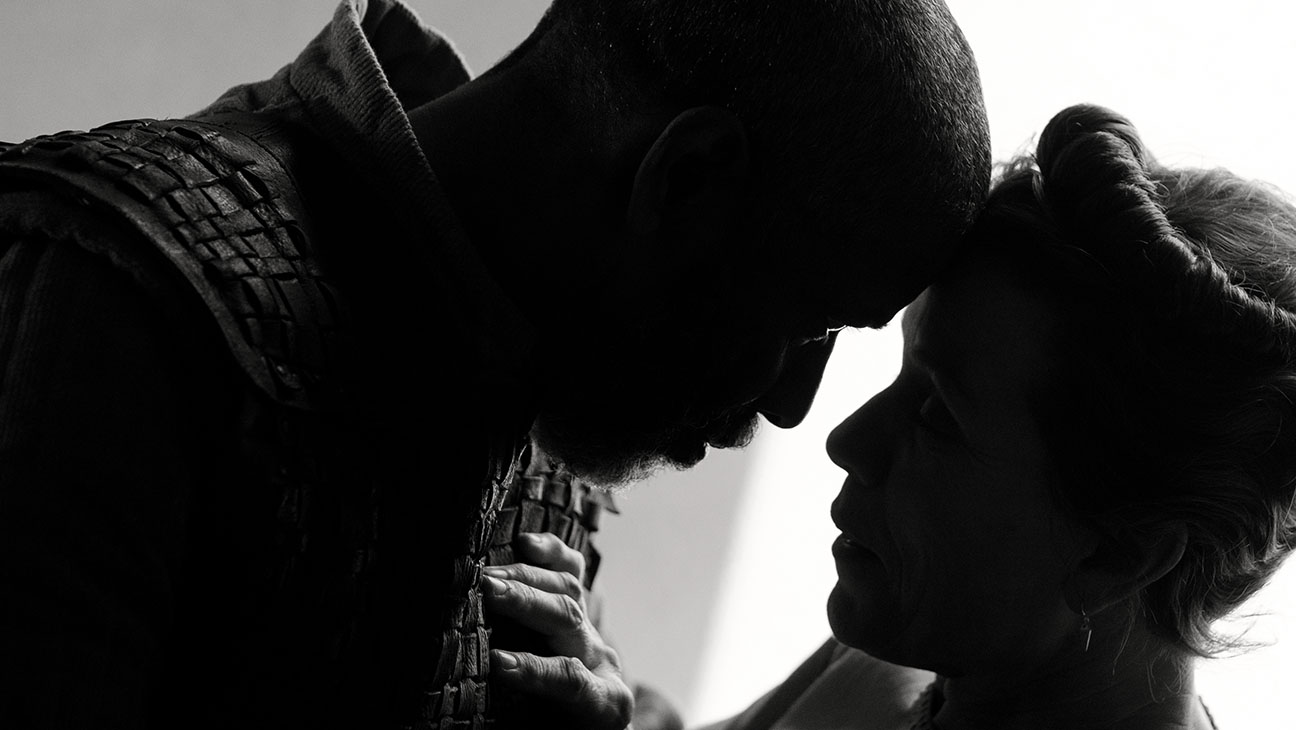 Image Courtesy of A24

The Tragedy of Macbeth Review

As far as adaptations of William Shakespeare’s plays goes, Joel Coen’s The Tragedy of Macbeth might be the most dreamlike while still being a relatively straightforward adaptation. It doesn’t waiver from the source text of Macbeth, but it also feels otherworldly. Thanks to Bruno Delbonnel’s gorgeous black-and-white photography and an atmospheric, haunting score from frequent collaborator Carter Burwell, The Tragedy of Macbeth presents a reflection of the emotions suffocating the lead characters in a way that is both grounded in its narrative and ethereal in its presentation.

Those familiar with Shakespeare’s text will not find themselves too challenged by Coen’s adaptation. It’s still about Macbeth (Denzel Washington) as he finds himself wrapped up in a prophecy that tests his honor against his ambitions. After consulting with his wife, Lady Macbeth (Frances McDormand), he finds himself unable to shake the realization that with one foul deed he can become King of Scotland. So sets forth a plan to assassinate the King and lay the crown upon Macbeth’s head.

However, even with the comforts of Shakespeare’s words to keep everything familiar, Coen understands the language of cinema better than most and straddles a fine line between play and film. The sets in particular highlight this more than anything else. As giant, cavernous halls surround the actors, it’s clear that every frame is meant to capture a mood – a point in the rise and fall of Macbeth. It could be fields that stretch on forever or a lone castle perched upon the edge of a cliff, but every frame in The Tragedy of Macbeth is always evoking something. It might be the most obvious use of mise-en-scène and German expressionism that the Coen brother has employed yet, but it’s also incredibly effective.

Not enough praise can be pointed in the direction of Delbonnel who has had huge shoes to fill since working with Joel Coen on Inside Llewyn Davis and becoming the director’s go-to director of photography since working with Roger Deakins for decades. Here it’s easy to swoon over just how gorgeous the film looks in black-and-white, but Delbonnel also frames characters in ways that befit their status in the narrative: whether it’s Lady Macbeth walking from the distance down a long hallway until she takes over the frame, presenting her as the most important character at that given time; or the way Banquo (Bertie Carvel) enters a small spotlight as he ponders why the predictions provided to him by the witches not be as valid as Macbeth’s.

There’s also a way the witches that give Macbeth his fate are presented as supernatural, almost as if they’re not really there that exemplifies the attention to the film’s visuals as much as the story. They fade in and out of the fog, their reflections disappearing, multiplying, and manifesting as reality. When they reappear in the film they are encroaching on Macbeth, plain as day and the only thing he can see, giving them this sense that their power has increased tenfold. Kathryn Hunter’s performance as the witches is spellbinding and appropriately embodies the menacing, exacting nature of their role.

No one in The Tragedy of Macbeth delivers a poor performance though. Even with its gloomy nature, there are plenty of memorable performances that feel at home in any of Coen’s prior works such as Hunter, Stephen Root, Scott Subiono and Brian Thompson all injecting a tiny bit of comedy to the dark world surrounding them, in their own unique ways. It’s truly an acting showcase all around though as Alex Hassell, Brendan Gleeson, Corey Hawkins, Harry Melling, and Moses Ingram make effective use of their screen time, with Hassell in particular standing out as Ross.

At the heart of it all though is Washington and McDormand. Both actors have long proven themselves masters of their craft and they both deliver lived-in, emotional portrayals of people consumed by ambition. McDormand’s character is arguably the most vital, acting as both a heartbeat to the film and the driving force to Macbeth’s ascendancy to the throne. It’s in her hands that she manipulates her husband to act on the seed the witches have planted and McDormand walks that line between loving and power-hungry with ease. But Washington gets his own tightrope to walk as he tries to maintain sanity as his fears begin taking hold and the walls around him crumble. They’re both delivering some of the best performances in their careers, and it is obvious that they both revel in the opportunity to embody these iconic characters.

For Shakespeare scholars, there’s still something to gain from The Tragedy of Macbeth. It’s relatively faithful to its source material, but still manages to explore it in a new light, providing one of the better cinematic adaptations that can be held up in as high regard as Akira Kurosawa’s Throne of Blood and Justin Kurzel’s Macbeth. It’s the more straightforward of the bunch, but with an exceptional eye for its craftwork and technical elements and how those benefit the narrative, The Tragedy of Macbeth offers an enriching and captivating experience.

Watch The Tragedy of Macbeth

Schemes in Antiques is a Thrilling Enough Treasure Hunt

Belle Brings Beauty and the Beast to the Digital Age