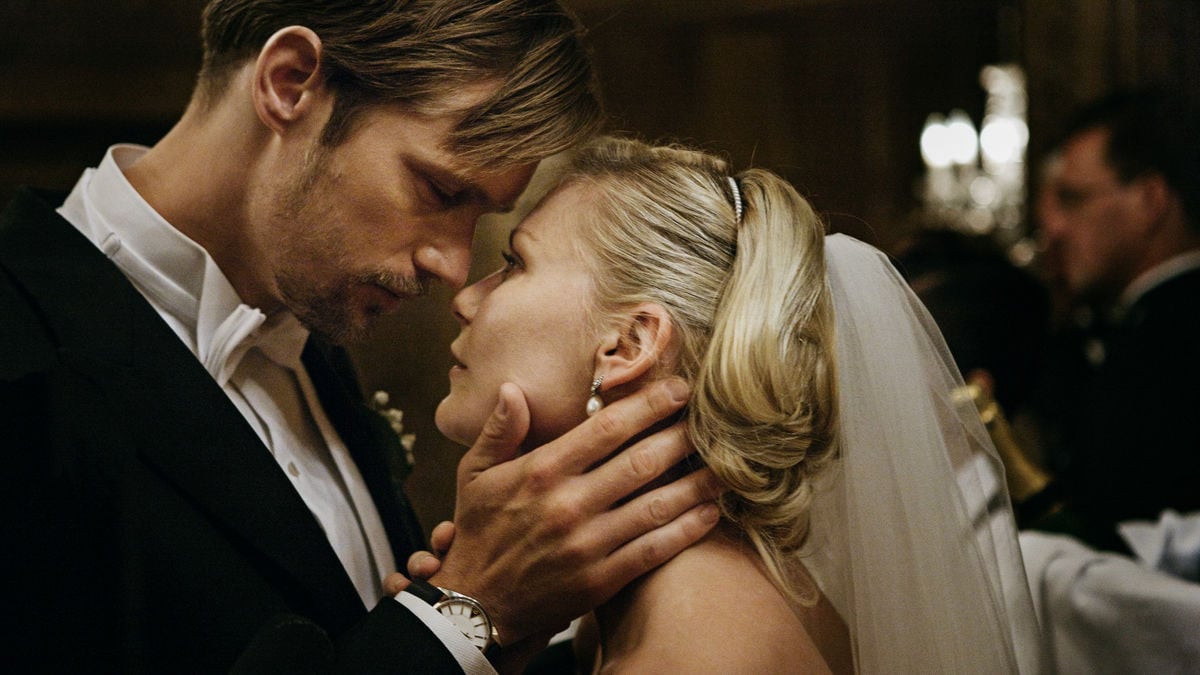 An apocalyptic film that gives away its ending in the first ten minutes, Lars Von Trier’s Melancholia is far less interested in any gigantic blue planet crashing into our gigantic mostly blue planet than it is in how two sisters relate to one another. Picking up aesthetically where he left off with Antichrist – high-contrast, operatic sequences of extreme slow motion functioning often as prologue, epilogue, or interlude against the Dogme-leftover, handheld narrative sections – Von Trier has made his funniest film to date. Odd then that all of the humor comes amidst a broken wedding and the end of the world.

Melancholia is divided into two sections. The first section, “Justine,” is named after its protagonist, played by Kirsten Dunst. The section begins with newlyweds Justine and Michael (Alexander Skarsgård) en route to their wedding reception. They’re in the back of a limousine which, try as husband, wife, and chauffer might, is unable to get around a bend on the way to the luxurious mansion and accompanying 18 hole golf course where the celebrators wait. This opening, a funny and tender look at early love, is also more prologue than the actual, slow-motion prologue of the film. It’s also prescient. The car doesn’t want to get around that bend and to the site of the rest of the film (a microcosmic setting, much in the vein of the cabin in the woods from Antichrist). If Justine’s mental illness (her melancholia) stems from the inevitability of the destruction of earth, then this opening is a last-ditch effort (by whom? The car? Von Trier himself?) to steer clear of what will become the sight of absolute destruction.

The remainder of “Justine” takes place on the grounds and in the huge building as Justine battles depression, has sex with a newly employed copywriter at her job (the awkwardly hilarious Brady Corbet), finds herself more aligned with the confident pessimism of her mother (Charlotte Rampling) than the jovial drunkenness of her father (John Hurt), and ultimately ends the marriage before it even begins. It’s Von Trier throwing back to his situational human tragedies (Breaking the Waves and Dancer in the Dark), and there’s little-to-no mention of any impending doom, let alone a planet about to shoot past the earth.

The second section is named for Justine’s sister Claire (Charlotte Gainsbourg). Far more narrative than the ultimately more symbolic “Justine” section, “Claire” takes place immediately post-wedding, and still at the same chateau. Claire is obsessed with Melancholia – the planet coming dangerously close to earth – but her scientist-husband John (Kiefer Sutherland) reassures her that by all calculations it’ll scoot right on by. Like a gravitational waxing and waning, as the planet nears, Claire’s anxiety increases, but her sister’s depression decreases.

To say that Melancholia is disinterested in its science-fiction elements would be a huge mistake. Though Von Trier pushes them to the literal fringe of the narrative his film is more sci-fi than any of the hysterical Knowings or Armageddons, whose conceit is always, “discover the threat, spend 100 minutes rushing around to thwart said threat, climactically fail or succeed in said rushing around.” If the human presence seems to be more important during 130 of the film’s 136 minutes it’s because it is, and because the director has correctly surmised that to be science-fiction, one needn’t always remind its audience of genre with visually redundant clues. Instead, Von Trier is content to allow his bookended sequences to speak for themselves and for the middle to then function in relation to and because of what surrounds it.

If you find yourself asking the purpose of Justine’s section, think back to the opening montage, which is shot the way it is to point to underlying motives. Many of these shots are repeated later, although slightly differently. Their place in the opening, in Von Trier’s cinematically-transcendent style, is simply the subtext. If in the prologue Claire runs through a golf course sinking into the ground, and later she runs through that same golf course amidst hail, it’s not because one happened and the other didn’t, but rather because the first indicates the feel of the second: Claire is stuck.

Other shots in the first few minutes function similarly: a shot of Justine being pulled into the ground by the roots from a tree, another of she, Claire and Claire’s son walking in Resnais-like equilibrium towards the horizon where Melancholia will ultimately appear. These hypnotic shots are Von Trier’s treatise on inescapability and the irony that earth, and not Melancholia, is the “evil” planet that takes more than it gives.

Strange that, for being a film about death, depression and disaster, Melancholia leaves such a pleasant taste in the mouth. It’s ending, so grandiose and overwhelming in scope, celebrates our smallness rather than despairing in it. There are imperfections: Justine’s section plods at a certain point. Von Trier’s camera becomes tiresome for a short while (though it’s quickly saved by some fantastic editing). But the carefully constructed symmetry of the narrative, and the breathtaking introduction and finale are cinema at its finest.

Tick, Tick… Boom! is a Huge Mess, with Occasional Flourishes