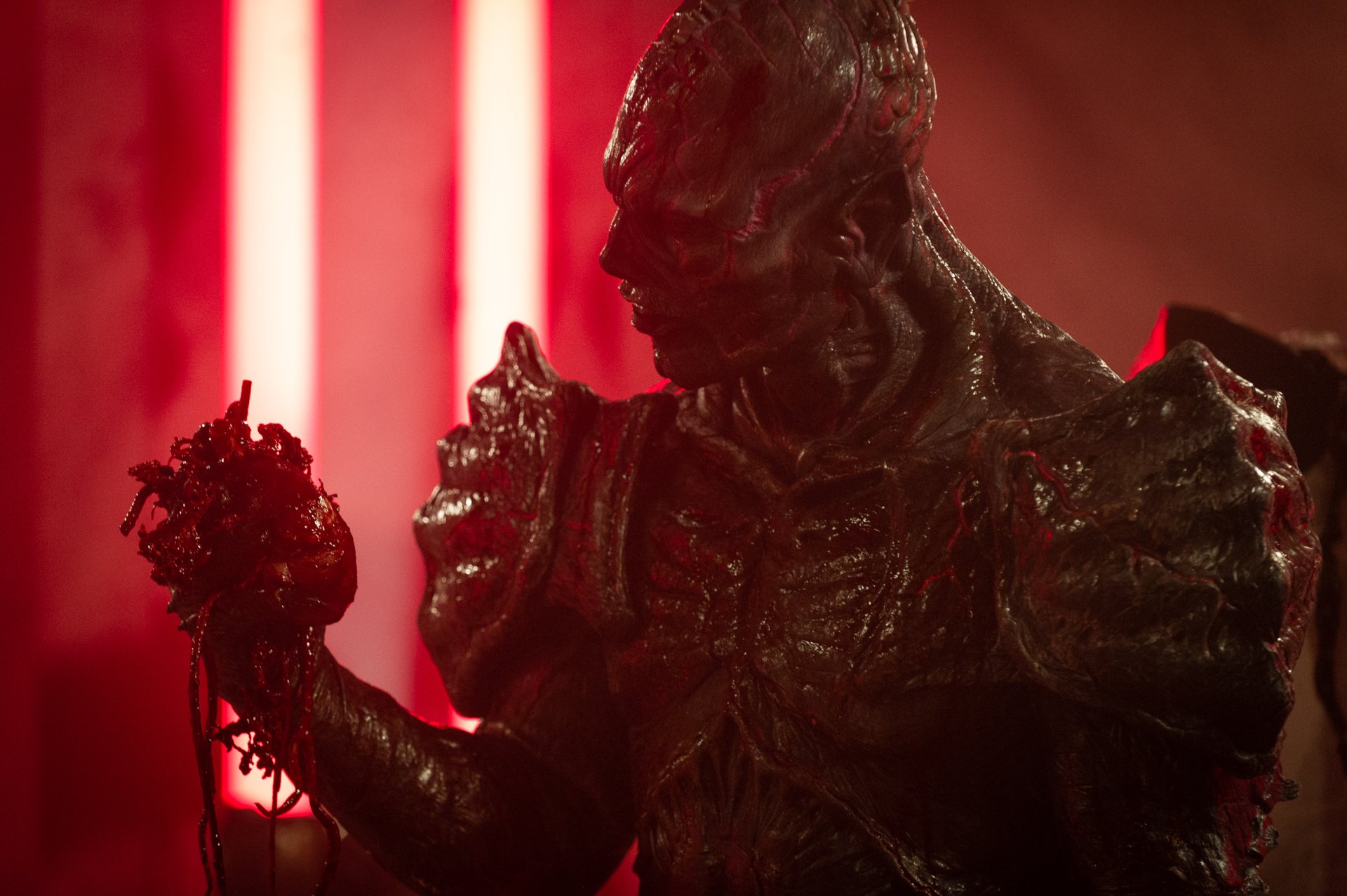 Channeling the energy of Saturday morning cartoons, the heart of a kitschy family movie, and the insanity of a midnight gorefest, Psycho Goreman somehow wins your heart over even when the titular character is a complete jerk that only wants to kill every living being in the universe. Incredible (and excessive) practical effects and a commitment to the absurdity of the story are only part of the reason why Steve Kostanski’s latest film is his best yet. Oozing with affection, few films manage the dizzying balance of over-the-top gore and childlike exuberance like this.

Psycho Goreman feels like a fever dream of a film that would have somehow slipped through the cracks and ended up airing on a family channel movie night one time only in the 1990s, subsequently being pulled off after a slew of angry letters were received by concerned parents. Kids would have talked about this movie on the playground and played the film’s sport of Crazy Ball at recess. Underneath all the blood, guts, and profanity is an endearing family film that has a massive heart too big to contain.

When Mimi (Nita-Josee Hanna) and her brother, Luke (Owen Myre), find a mysterious gem in their backyard they unknowingly unlock a prison holding a being who wants nothing else to do other than to wipe out the entire universe. Mimi quickly discovers that so long as she possesses the gem, this being is completely under her control. After workshopping some names and realizing the awesome power that this alien lifeform controls, Mimi and Luke settle on a name: Psycho Goreman (or PG, for short, played by Matthew Ninaber). As Mimi forces PG to play childish games with her and serve as both best friend and servant, the rest of the universe plots to stop PG before he can escape Mimi’s control and destroy the universe.

Most of the time though, audiences are just watching kids behaving as expected when they discover they have a super strong, cool-looking alien completely under their control. Mimi doesn’t really have many friends and the ones she does have are also friends with her brother Luke. While she longs for friends like any kid her age, she’s also extremely mean-spirited and bullies those around her whenever she can. What’s most compelling about Psycho Goreman’s characters is how mean they can be but still be endearing. Even with PG constantly talking about killing Mimi and her family, there’s this soft side underneath and a playfulness to their rapport that ensures that it’s all just fun and games. Of course, PG has every intention of killing everyone, but maybe he can spare a few lives on the way.

That hardened exterior that a lot of characters have and its subsequent deterioration is exactly what makes Psycho Goreman a lot of fun. We get the cruelty, the violence, and the absurdity, but it all comes with an enthusiasm you rarely see in villains. Ultimately, the film doesn’t condemn its main characters because it isn’t concerned with whether they’re right or wrong in their convictions. In fact, the villains are not inherently seen as the bad guys from the kids’ perspectives – morality isn’t really taken into account. Instead, it’s mostly measured by how well they get along.

Psycho Goreman also has a really nice message regarding the importance of kindness in a world seemingly desensitized to cruelty. Yeah, Mimi can be pretty harsh to Luke, but there’s an acceptance that this is just her way of bonding with people. It’s how PG and her get along so well as they both employ similar tactics to make themselves feel better. Mimi and Luke’s parents fight a lot over seemingly trivial matters, but they also seem to get along well. The loyalty between characters defines what is good in the universe of Psycho Goreman.

That being said, there is a cloyingness to Mimi’s constant insults and bully-like behaviour that eventually wears out its welcome. The other characters acknowledge it, but the film itself doesn’t directly confront it until later. PG, Mimi, and Luke are just hanging out, having a relatively good time while unknown forces prepare to attack PG and attempt to destroy him before he can destroy them. If you’re not down to just hanging out for a bit with a mass-murdering alien and two kids as they tear up the town with hijinx then this film is definitely not for you.

This leads to exactly who this film is for: those who want to watch a bevy of practical effects done by people who clearly grew up watching 80’s fantasy and horror, then got obsessed with The Guyver and Power Rangers. What if instead of Elliot and E.T. hanging out and bonding it was Psycho Goreman and Mimi terrorizing a neighborhood together? It’s paying homage to that type of film while subverting it in a clever way. The choreography in the fights isn’t always fun to watch but the lengths the film will go to show something gnarly is admirable and often exciting. Combined with some imaginative outfits and costumes, there’s really no limit to how silly Kostanski and crew are willing to get.

Audiences will know by the time PG and Mimi appear on screen together whether Psycho Goreman is for them. It took a little bit of time to get accustomed to the way the characters all behave – recognizing that none of them are your typical moral compasses – but once it begins to click and the camaraderie kicks off, it’s non-stop lunacy. An achievement in practical effects that is impressive on a design level, but seeing it all in execution-only emphasizes how much work went into pulling off this film. Fans of Astron-6’s filmography will find themselves right at home with Kostanski’s ode to the weird, cult cinema that we find ourselves strangely attracted to despite its off-putting exterior.