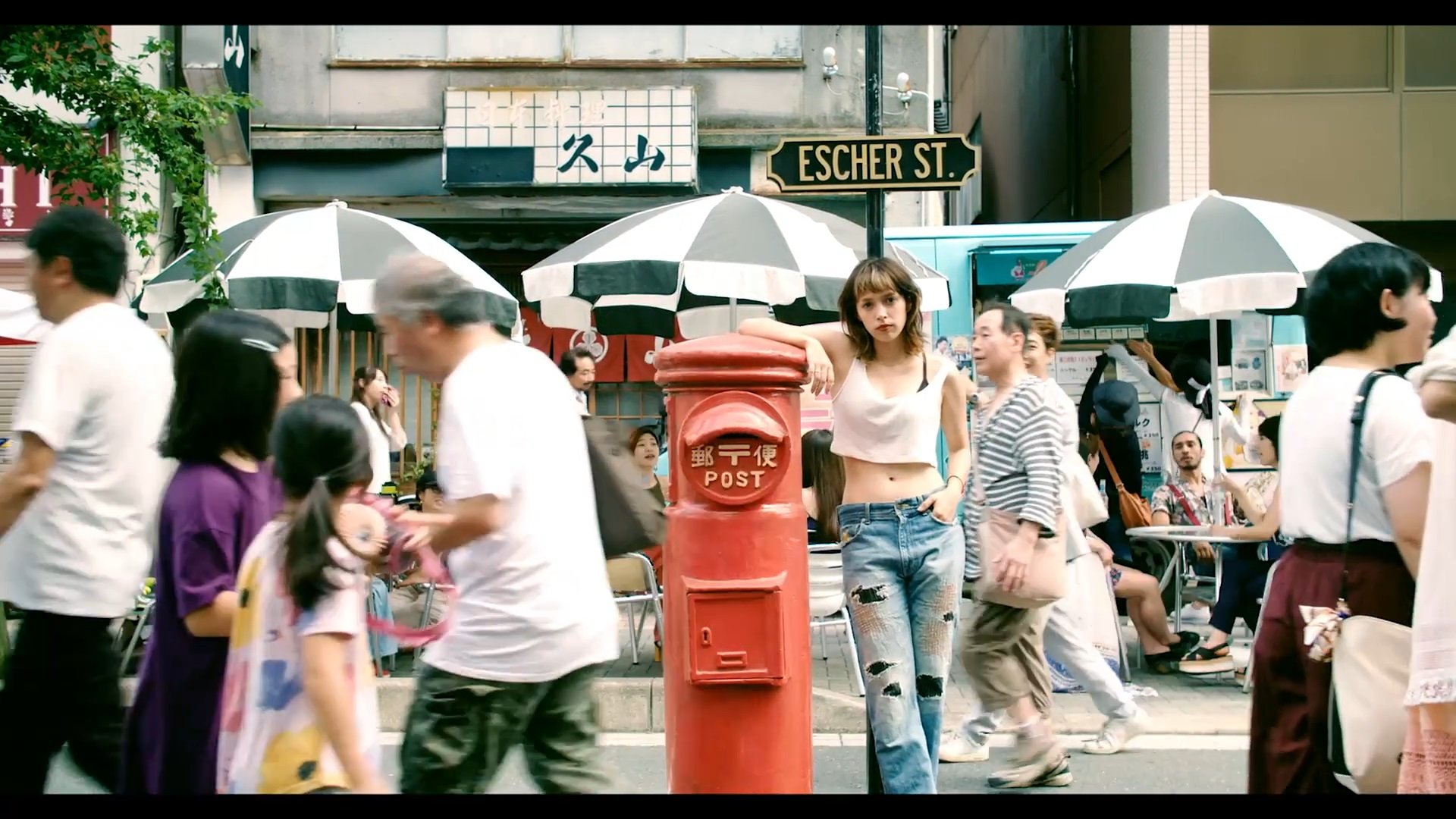 It’s no secret I absolutely adore Sion Sono’s unique brand of filmmaking, hitting brilliance after brilliance with a mix of insanity, passion, and incredible technical ability. His works cover a broad range of genres, but something that’s come up fairly consistently in most of his works is that burning passion for film and film making. It’s been a central element in Forest of Love, and Why Don’t You Play In Hell?, as well as a major (and sometimes rather meta) theme in Antiporno, and Love Exposure. This leads us to Red Post On Escher Street. The latest Sono film and yet another beautiful love letter to film making.

After Sono suffered a major heart attack in 2019 he took a step away from the stress he was putting himself under in order to recover and get his health back in check. All props to him, there was a problem and he took a step back to actually fix it. This has pushed Prisoners of the Ghostland, an upcoming Sono film starring none other than Nicolas Cage, back a considerable bit (now set to debut at Sundance on January 31st). Though outside of that project he’s obviously not missed a beat.

Forest of Love was a soaring return, and I found it one of the most impactful films to hit the world of cinema in years. Getting picked up by Netflix, getting to bring his work to a worldwide audience, was a huge step forward. Not just a film festival darling across the world, but hitting a major streaming platform too.

And now we’re caught up, and with that comes Red Post On Escher Street. The project seemed to drop out of nowhere. A Sono film about film making, with a large chunk of the cast being either first-timers on the big screen or relative unknowns. Sure there are a few bigger names, like Tarou Suwa (Battle Royale, Dark Water) and Mitsuru Fukikoshi (a frequent Sono collaborator), but the main cast is largely fresh.

Red Post On Escher Street follows a director named Tadashi Kobayashi holding auditions for his next project. A whole host of performers audition, however, the lead roles escape them. Instead, they manage to participate as extras, and everything ends up spiraling out of control in one of the greatest endings I’ve had the pleasure of seeing in years.

It’s the modern Sono masterpiece, the love letter to all that is film, a layered narrative that follows the intricate backstory tendrils flowing from each member of the rich cast. It’s a highly immersive choral comedy, the voice of each character contributing to the whole.

The opening shot immediately gives us a succinct summation of one of the broader messages of the film; each of the characters that wander across the frame in front of the titular Red Post on Escher Street feature in either a minor or quite major role in the film to come. Each of them has their own personalities, their own quirks, and even the smallest of them offer some detail in the greater painting of the film.

Something beautiful Red Post On Escher Street manages is to not only get across it’s broader theme of everyone having a part to play, but all sorts of philosophical musings branching off from there. Extras are positioned front and center, everyone has their own story to tell. But then we have these main characters who take their place as extras in the others’ stories, and their connection to each other and the world itself builds this impressive tapestry.

Then there’s the performance side of things, both in narrative and in reality. Everyone has their own drive, their own reasons for portraying a character. The importance of the character that is the self is highlighted, and every one holds a place that keeps everything together. This is ‘power to the people’ embodied.

Aside from the thematics side of things which really brings a feeling of triumph even to the viewer, the comedic sensibilities of Sono are on show here. There’s a group of cult-like fanatics obsessed with the director, and their characters borrow so much from each other that their attempts at unity bring about some hilarious moments. Then there are the construction workers constantly in the way of the hopeful actors on the way to the audition, and the group of professional extras trying to sneak in as much screen time as possible and consistently ruining the shot.

It’s refreshing to have a film discuss some heavy themes, from grief to oppression to the chasing of dreams that always seem just out of reach, wrapped in such a colourful and fun experience. From the melodramatic to the melancholic, to the traumatic, but also up into the brightness of the ridiculous, something Sono mixes with impressive ease.

What must be highlighted is the awe-inspiring performances from Roku Kurokouchi as Kiriko, and Sen Fujimaru as Yasuko. Kiriko having lost her partner and desperately trying to achieve his dreams of becoming an actor, first for him, then for herself. Yasuko having witnessed and been a part of great tragedy and abuse and having her mind snap, yet finding a way to retain her sense of self. These two newcomers, fresh with no film credits previously, shine brighter than most seasoned actors would. And in the steady escalation of the ending, these two are what elevates Red Post On Escher Street, bringing a triumph and liberation to the themes of self.

Going into this film blind without prior experience with Sono films could honestly prove a bit taxing. The pace is slow as the beautiful flower at the heart of the film blooms, but there is a lot of following character’s stories seemingly away from what would traditionally be considered the main plot, and lengthy shots focusing on performance and minute details.

Despite the awe-inspiring performances from the entire cast, there are certain scenes that start to feel they might not be going anywhere, or things have started to go on a bit too long. It’s an art film, an ode to all that is cinema, setting a focus on extras, actors, and finding one’s self. Most things come together in the enthralling finale that had me on the edge of my seat for a good 40 minutes, though there are a few stray threads that never quite get resolved.

What I can say is this is a film certainly not for everyone, I’d much sooner recommend Forest of Love, or Love Exposure, or Himizu, for someone wanting to dive into the world of this auteur. But in saying that, I think this is a side of Sono we haven’t truly seen in a good long while. It feels like the soaring height of discovering Love Exposure, perhaps not as brilliant but certainly a unique beast shaking up the way we consider film.

There’s not a single thing about this film I don’t adore. Sono’s films are a certain passion for me and this is precisely what I love to see from him. Couple this with breathtaking performances from the entire cast, and brilliant cinematography sitting atop modern Japanese cinema, and Red Post On Escher Street stands tall as the modern Sono masterpiece.

Red Post On Escher Street is set to be available to watch worldwide from February 5th – 18th through Japan Society.