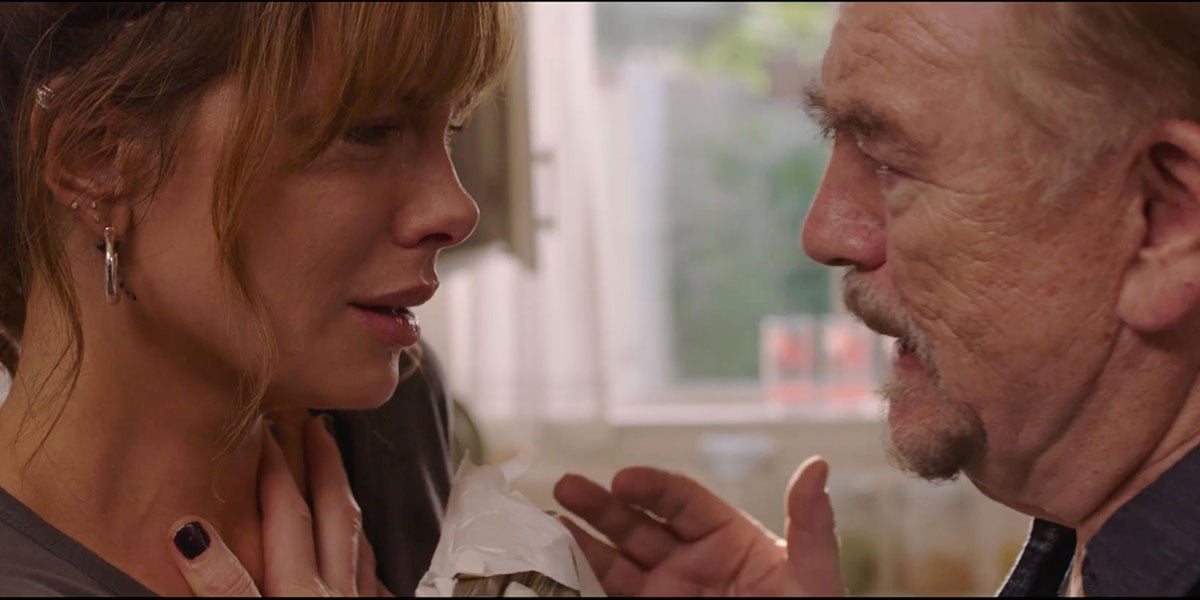 To expect a cinematic comeback from Catherine Hardwicke would be as futile as trying to stop a plane that has already left the ground. Prisoner’s Daughter is the equivalent of such a plane, but it’s one that will strap you in for a mind-numbingly boring and dumb journey that leaves you questioning why you decided to plot a trip to an excruciatingly dull destination in the first place.

It’s a bland, cloying, and passionless family drama that runs the gambit of tired “flawed family” tropes that would’ve been cliched far before the turn of the century. The performances here are its only redeeming feature, but on the whole, do little to save a lifeless exploration of a troubled father-daughter dynamic— which leaves you wondering why movies like this are still being made.

Brian Cox stars as Max, a former boxer, and a dying convict diagnosed with pancreatic cancer who is given a compassionate release. He sees this as one last chance to redeem himself in the eyes of his estranged family. The conditions of max’s release require him to live (in house arrest) with his daughter, Maxine (Kate Beckinsale) who struggles to cover her Las Vegas home’s mortgage and her son’s epilepsy medication. Her ex-husband, Tyler (Tyson Ritter), an unemployed musician and violent addict refuses to help her.

Once Max arrives, he calls on old friends to fix up the place, secure money, and teach his grandson, Ezra (Christopher Convery), how to defend himself against bullies. Yet, the central question is whether Max can make amends for his decades-long neglect with his presence now.

What could have been a cathartic and poignant portrait of broken pasts and reconciliation is made into a derivative drama that is far too predictable, obvious, and snore-inducing. It’s teeming with generic conflicts, cliched “bad guys”, and rote montages that glibly navigate these relatable familial issues, failing to even offer a surface-level satisfaction in its take on them.

The law of Chekhov’s Gun is in full swing here—just not in any way that is arresting. Hardwicke and screenwriter, Mark Bacci, spend a majority of the runtime setting up the moments and sequences they ultimately fail to make engrossing, or even faintly interesting. With a runtime of just over ninety minutes, it somehow finds a way to lose momentum long before its anti-climatic conclusion, which generates unintentional laughs that, at the very least, stir some emotions, even if they are fleeting.

Moreover, the film’s confrontations (which there are a lot of) distinctly lack weight, nuance, and a provocative edge. The dialogue wildly ranges from authentic and earnest to uncannily awful. The sheer dichotomy between its moment-to-moment sequences raises more eyebrows than they do any sentiments. That is, perhaps, the film’s greatest crime. It fails to induce any form of sensation from its viewers whatsoever. Its dull story is repeatedly emboldened by its dismal understanding of dramatic tension.

While Cox is wonderful as ever, tapping into the melancholy and stoicism of a grizzled man accepting his doom with tact, the performances here varyingly range. Beckinsale is serviceable as a single mom struggling to save her son from the vestiges of her own broken childhood, while Convery’s turn as Ezra sticks out like a sore thumb. It’s clearly a result of inexperience conflicting with skill, and it makes for a stilted, jarring endeavour.

Ernie Hudson, As Max’s best friend, is a delight to behold but the same can’t be said for Ritter’s tropey and laughably bad turn as every absent father ever. His presence actively degrades the climax of the film and takes away from the plaintive tinge it attempts to cement.

The Prisoner’s Daughter is a film that goes everywhere but up, with almost every creative decision undermining the competence that preceded it. Add in musical choices that evoke the worst of the MTV generation, and you get an experience that tells you what to feel rather than making you truly feel it.  Its ambition for catharsis remains just that — an ambition.