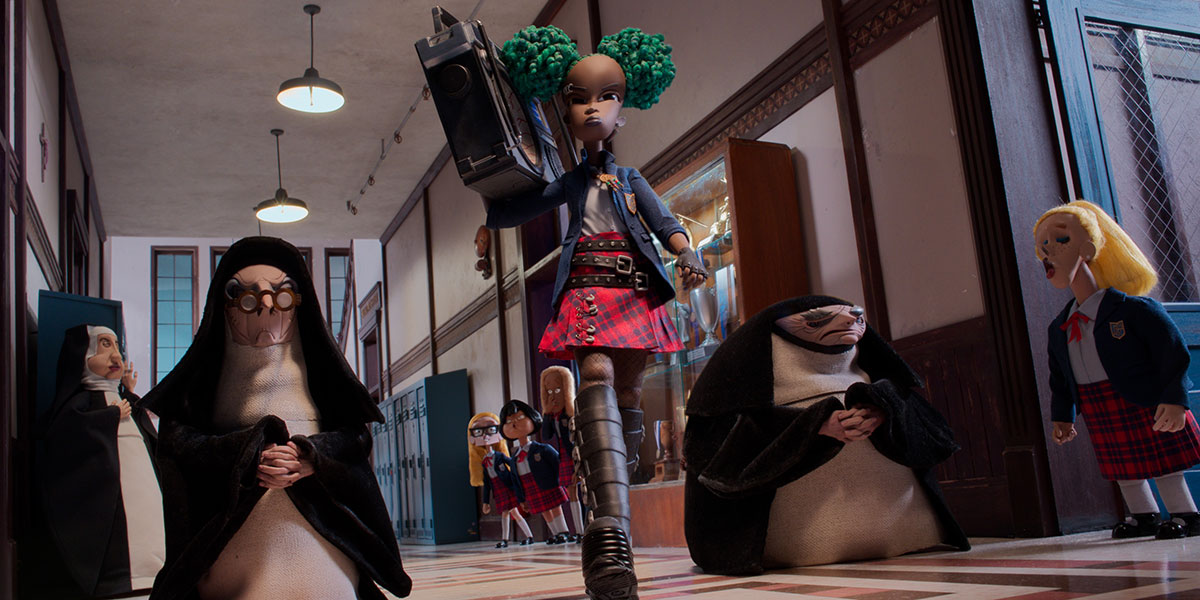 Henry Selick’s absence from film has been a loss for stop-motion animation. The director behind beloved animated classics like The Nightmare Before Christmas, James and the Giant Peach, and Coraline has always injected his films with creativity and characters that represent the fringes of society. Those accepted within like-minded communities but find themselves often ostracized from society as a whole for being different. There’s no straying from the path in his latest film either as Selick’s Wendell & Wild brings together a devious level of lore and dizzying stop-motion with a cast of characters looking for a way out of their pain.

Co-written by Selick and Jordan Peele, Wendell & Wild is a story about an orphan whose parents’ death leaves her broken and directionless. Kat (voiced by Lyric Ross) mourns the tragic loss of her parents and now has an inability to truly connect with anyone else. She gets kicked out of school frequently and always finds herself in trouble. Brought back to her hometown of Rust Bank where her parents died, she’s now forced to go to a boarding school within a town completely demolished and preparing to install a private prison.

Supernatural forces begin taking hold of Kat though, and she soon is accompanied by Wendell and Wild (voiced by Keegan-Michael Key and Jordan Peele) – personal demons who have dreamt of returning to the Land of the Living in order to open up their own amusement park. However, their quest for money soon finds them resurrecting the dead in order to accomplish their own goals and forcing Kat to re-confront the death of her parents.

For horror and Selick fans alike, Wendell & Wild delivers an astounding collection of the macabre in both its character designs and storytelling. It’s a lore-heavy film that is always brimming with creativity as it brings together the dead and the living in fascinating ways. Every character is just as meticulously hand-crafted as expected from Selick’s previous work and the stop-motion animation really gives the entirety of the film a DIY vibe that meshes perfectly with Kat’s punk rock rebellious attitude. She’s a tremendous force and everything in the world around her is just as impressive as her strength in the face of a completely broken world.

Where Wendell & Wild struggles most is in its plotting. A narrative that spins out of control of its characters, Selick and Peele’s screenplay also feels like it doesn’t quite know where it’s going next. Constantly it fades to black only to come to a new scene that is jarring in its placement. Nothing flows well. Instead, it bobs and weaves around the main narrative of a town being overtaken by capitalist greed, frequently delving into its side plots without really providing even those with much importance. Everything feels cohesive aesthetically, but narratively it doesn’t all come together as neatly as it suggests. Even the ending is a relatively muted conclusion that contains some of the film’s busiest animation but also leaves little of an impression.

There’s an undeniable allure to Wendell & Wild though that isn’t new to Selick’s work. He has always maintained a representation of the weird and the macabre. A filmmaker that imbues his work with the same passion for being yourself as the audience he cultivates and champions his films, Selick continues to be one of the most endearing forces in animation. Even though Wendell & Wild really does just retread a lot of familiar themes in his filmography, it’s still a solid return to film in a way that is refreshing. While Laika Studios has carried the torch for stop-motion for a while, it’s seeing movies like Wendell & Wild and Phil Tippett’s Mad God that remind of the variety of auteurs who use stop-motion as a canvas to explore the darker and interesting corners of the mind.

Triangle of Sadness is a Blistering Cringe-Masterwork