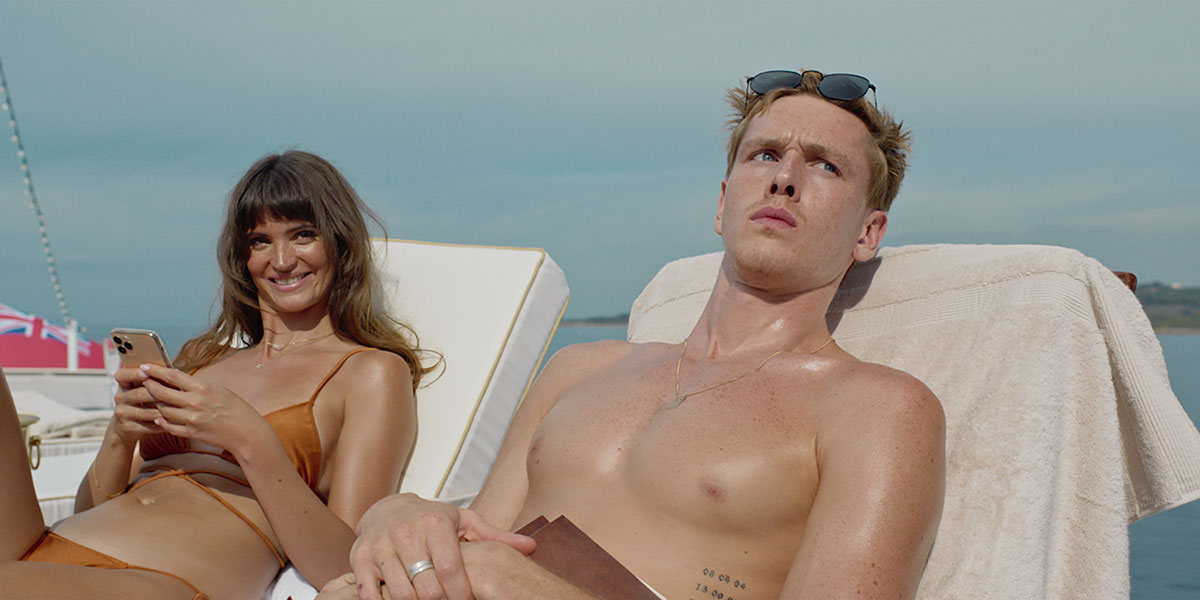 There have been numerous attempts at cinematic takedowns of the uber-rich and elite. Most take a serious, pretentious approach in emphasizing the inherent hypocrisy, greed, and lust for power that is wreaking havoc on the political, social, and economic climate of the world—take Todd Phillip’s Joker, or Steven Soderbergh’s The Laundromat. But with such an air of gloomy condescension, these projects forget to underscore the primary reason for their existence: to be a cinematic experience that is first and foremost, entertaining. With such an ostentatious attitude, these films become the very target they initially set their sights on.

Yet, with the Palme D’or winning, Triangle of Sadness, Ruben Östlund cements himself as the people’s satirist. Laying bare an incendiary critique of the 1% that never pats itself on the back, instead being the rare epic that invites its audience to take part in its blistering dismantlement of the idle rich.

In its opening moments, it becomes immediately clear that Östlund is in complete control of his craft, as the lighting, composition, and framing radiate with palpable confidence that practically emanates off the screen. It doesn’t take long to be sucked into its grandiose vision of cringe comedy and be utterly enthralled.

Structured as a three-chapter fable, it centers on models Carl (Harris Dickinson) and Yaya (Charlbi Dean) who navigate the cutthroat world of fashion, as they come to terms with the reality and boundaries of their turbulent relationship (which culminates in a beautifully awkward argument about paying for dinner). Invited to a luxury superyacht, they find themselves in the company of a British arms dealer, an endearing Russian oligarch (Zlatko Burić), and a milieu of self-indulgent characters who are all shepherded by the ship’s Marxist captain (Woody Harrelson).

The seemingly dream-like cruise runs afoul when the captain decides to entertain his guests with a lavish meal during a tropical storm. In what is the film’s greatest scene, an elegant cacophony of vomit and diarrhea erupts, unearthing the ugly truth these people spend their lives decadently obscuring. As the chaos ramps up, the balance of power is slowly reversed, resulting in a new form of class conflict.

While this reads as heavy-handed, Östlund’s bravura and bombastic lens turn that criticism into one of its greatest strengths, tinging its outlandish satire with an utterly thought-provoking and reflective sheen. While ostensibly bizarre, there is an ocean of rich texture and meaning that is just waiting for deeper introspection—with its provocative conclusion containing a swath of interpretable meanings that will generate heaps of great discourse. This is, for all intents and purposes, the cinematic meeting ground for both the layman and the professional.

In addition to its visual and sonic mastery of farcical cringe, the dialogue is also impeccably constructed, maintaining an edge that is gut-bustlingly hilarious yet organic. This dynamic interplay between naturalism and heightened exaggeration is wholly electric to behold, especially when the characters’ constitutions are tested and outright obliterated. Östlund takes no prisoners, as his incendiary sights set the banality of its privileged coterie ablaze.

Moreover, the performances here perfectly serve the film’s absurdist ambitions. Harris Dickinson and the late Charlbi Dean are revelations, as their nuanced yet peculiar performances fit firmly and boldly into Östlund’s depraved vision. Harrelson is expectedly great as the cruise’s perpetually intoxicated captain, while Dolly de Leon serves as the film’s surprise highlight, with her confident turn elevating the film’s last (and weakest) act.

Östlund’s most provocative and fierce satire yet is consistently firing on all cylinders. Even though it loses a bit of steam as it approaches its conclusion, it doesn’t take away from its wild, bracing, and utterly inventive journey. Much like the never-ending appetites Östlund is attacking, his second Palme D’or winner proves he may yet have room for a third one. Triangle Of Sadness is, in simple terms, one of the greatest satires in recent memory.

The Woman King: Terrific Action Carries it to Victory