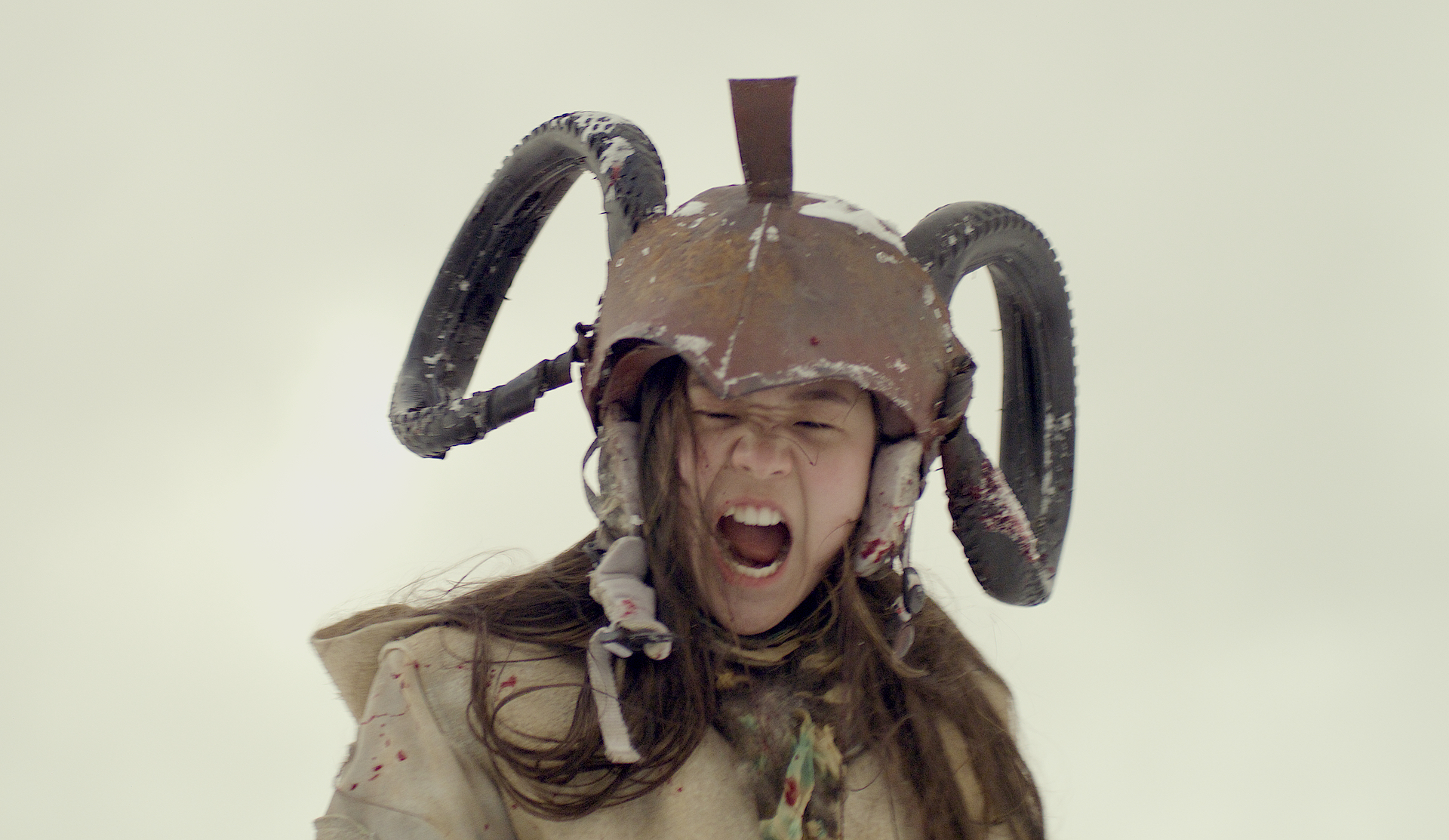 Set in a dystopian future where the world has experienced extreme freezing to the point of being largely inhospitable, Polaris straddles a line between cautionary tale and hopeful persistence in a similar vein to the Mad Max franchise. The similarities don’t end there, but Kirsten Carthew’s latest film taps into its environmental and ecological message with a tenderness that many of the film’s obvious inspirations have often bluntly confronted with animosity and rage. Polaris is an angry movie that also speaks to the vital need for human connection to survive impending doom.

It’s the year 2144 and Earth has become a frozen wasteland where people get around via snowmobiles hooked up to large gas canisters. When 10-year-old Sumi (Viva Lee) begins noticing the trees around her in agony, she is quickly captured by and comes face-to-face with a society dependent on destroying nature in hopes of survival. Raised by a polar bear and capable of communicating with nature in a way that other humans cannot, Sumi’s inability to speak to humans verbally does not hinder her forward momentum as she continues her journey to find a home by following the Polaris star.

Right up front, Carthew takes command of the audience by forcing them into an immersive experience dictated by Sumi’s perspective. Her interactions with humans almost always result in bloodshed. Her speech consists entirely of growls and grunts, while the humans around her speak their own foreign language. Neither party is able to understand one another, leading to an unsubtitled film that asks the viewer – and those Sumi interacts with – to engage with its lead character on her level in order to truly understand one another.

Fortunately, Polaris is visually captivating. Its snow-covered landscape serves as a reminder both of the beauty of nature and its unforgiving climate. The tracks of footprints and vehicles find themselves quickly erased by the winds of winter and any white on the ground can just as easily be painted red once conflict arises. The action in Polaris is strong and even though it can occasionally lose some of its impact through digital effects, the practical effects that are used often lend greatly to a further sense of immersion.

The costumes in particular stand out as Polaris often includes characters that look like they stepped out of a hybrid between Mad Max and the video game Horizon: Zero Dawn. Leather and metal scraps combine to create an aesthetic that blends human ingenuity with the environment surrounding its characters. When a movie is this dependent on visual storytelling, every bit of set design and production value helps to guide the viewer into its world.

There’s also Viva Lee’s performance that reigns in tenacity and empathy in equal measure. Sumi is a fierce, independent child that has survived the wastelands this long with the help of her polar bear mother. It’s the way Lee’s performance shifts as Sumi meets more and more characters, each one responding differently to her, that demonstrates a definitive prowess in front of the camera. Due to the many ways in which Polaris requires the audience to reconfigure its approach to the film, Lee acts as a guiding star throughout.

Unfortunately, Polaris is also often admirable in its execution than it is successful. While Lee and the film’s technical side are all impressive, it’s in service of a story that often moves forward sooner than it should. There isn’t a lot of time to breathe and its show-not-tell approach to storytelling is often undercut by its pacing. This becomes a larger problem in the back half of the movie as it centers itself around Sumi’s relationship with Frozen Girl (Khamisa Wilsher) that treads comfortable ground without deriving much emotion from their interactions. Coming off the back of Sumi’s relationship with a polar bear that dictates the way she behaves and her cautious interactions with Dee (Muriel Dutil), the back half of the film feels far more rushed and less compelling as it speeds to its conclusion while also trying to develop a new bond between characters.

Despite a few stumbles in a race to reach a conclusion, Polaris is surprising in how well it is able to take the audience by the hand and bring them into its post-apocalyptic frozen wasteland. Perhaps more akin to Turbo Kid – another Canadian production – Carthew does a wonderful job taking inspiration and crafting something unique but familiar. There’s a heart to Polaris that holds together its hostile world and suggests that compassion can help lead the way out of the darkness.