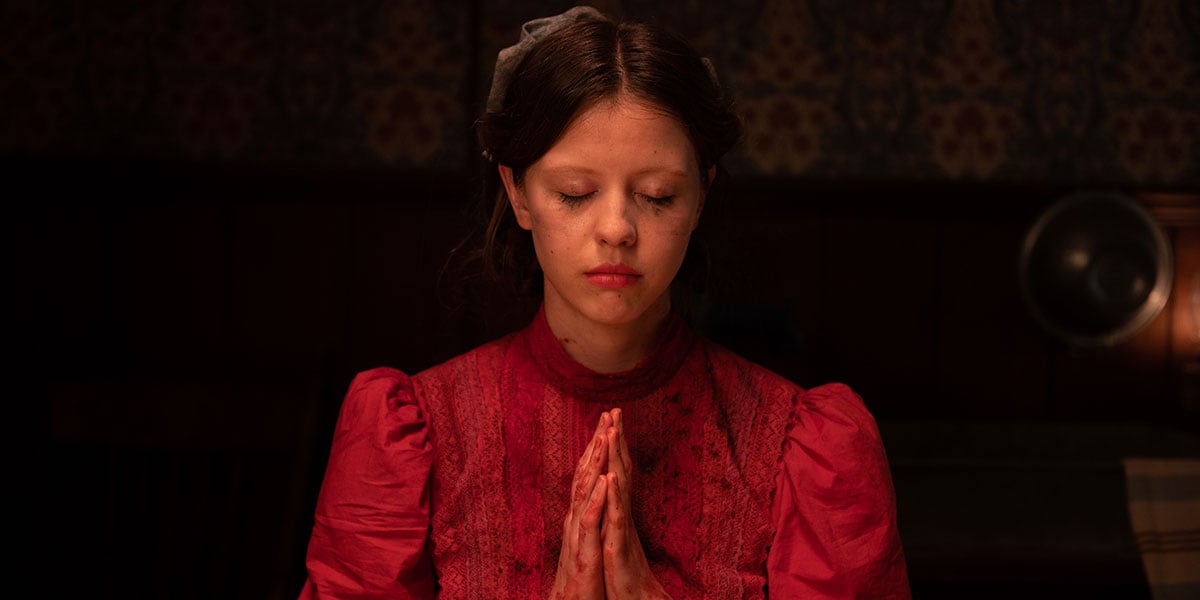 With Pearl, writer-director Ti West proves he’s one of the best at evoking cinema’s past. He’s embraced every facet of the horror oeuvre, not only reveling in its tropes, structures, and various eras but elevating them in a manner that is both revelatory and utterly thought-provoking. In X, West delivered a great mediation on age, beauty, and self-worth— all wrapped up in a traffic homage to the Grindhouse 70s Slasher.  Now his prequel— the second in the “X” cinematic universe, with the third, MaXXXine, already confirmed— is a vibrant (and bloody) tribute to the technicolor period that richly explores the dangers of repression, both sexual and otherwise.

West evokes the golden age of Hollywood by enveloping us in a gloriously lush, verdant, and vibrant technicolor experience that unearths the origins and ultimate downfall of the murderous and decrepit iteration of Pearl seen in X. While not terrifying in the traditional sense (mostly because of its bright colour palette) it still deeply unnerves and unsettles, wracking you with an unbearable sense of dread as we traverse the harrowing heartaches and heartbreaks of a woman dreaming to escape her insular farm life. As a result, Pearl is not only a great horror film but one that works within any genre.

Set during the twilight of the First World War, in 1918, Pearl (Mi Goth) wants to make it big in the world of Tinseltown to flee her menial agrarian life in the Texas backwoods. She uses movies not only as an escape from her abusive German mother (Tandi Wright) and eerie Wheelchair-bound father ((Matthew Sunderland) but also her fractured self—which is exacerbated by the absence of her husband, who is off fighting in the trenches of Europe.

As expected, her quest to be a star comes with disastrous results, as her kaleidoscopic dreams are underpinned by an exacting mindset that leaves no room for error or imperfections. Which brutally collide with the cutthroat world of showbiz and her mother’s expectation that she remains a docile, agreeable milkmaid.

Pearl unabashedly benefits from West’s skilled cinematic eye, which brilliantly cascades around its sequences with an epic, dream-like fervor. This is a filmgoing experience that is wholly made for the big screen, as the lavish wides and deft pans bring Pearl’s fantasy-like but depraved world to life. This in tandem with its textured, gothic production design and the grand operatic score rounds out a complete cinematic experience that is at once a feast for the eyes and the mind—all the while it agitates the heart.

West deftly treads the waters of banal evil here, creating a nuanced form of sympathy for a protagonist destined to become the ultimate antagonist. Though we know what lays in the cards for Pearl, her struggles and heartbreaking confrontations radiate with an immediacy that still enthralls. As we traverse the dominos on route to her murderous ending, we begin to understand and further appreciate the monster she becomes— not only making this film but the original a better experience on repeated viewings

It’s the rare slasher that not only complements its predecessor but elevates it, creating a natural and earned link between the two that never feels forced. Not only do the two serve as passionate celebrations of the horror genre but ones that also continue a pertinent narrative of self-liberation.

Yet, much of Pearl’s greatness is due to Goth’s layered and utterly mesmerizing performance. With an unadulterated commitment to the film’s oddball, campy sensibilities, she ferociously brings the titular character to life, tapping into an emotional honesty that makes it that much more heartbreaking when her aspirations and dreams viciously unravel. It’s this innate, raw, and unhinged demeanour that enlivens the film’s deranged set pieces, not only satisfying genre fans but those clamoring for a deeper look at what motivated her murderous persona.

It’s this commitment to character-driven and visually bold filmmaking that allows Pearl to stand above most of its contemporaries and shed off the worst tendencies of campy horror. It all coalesces in the great and surreal “Audition Scene”, and the even better “final speech” — consisting of one of the longest, unbroken monologues in film history, which is boldly realized through Goth’s fearless performance and West’s playful but direct camerawork. These are two of the greatest sequences of the year, bar none.

Pearl is a wonderful and confident addition to the “X” Cinematic Universe, which single single-handedly cements the nascent trilogy as one of the greatest things to happen to the genre. West’s proclivity for evocation superbly underpins the film’s examination of the dangers of repressing one’s desires. Making its dream-like and stark examination of real-world issues, that much more resonant. Forcing the question: why don’t more horror films dream this big and vibrantly?

Sidney is an Outstanding, if Conventional Look at the Life of Sidney Poitier

Sisu is Gonzo Action Made Underwhelming