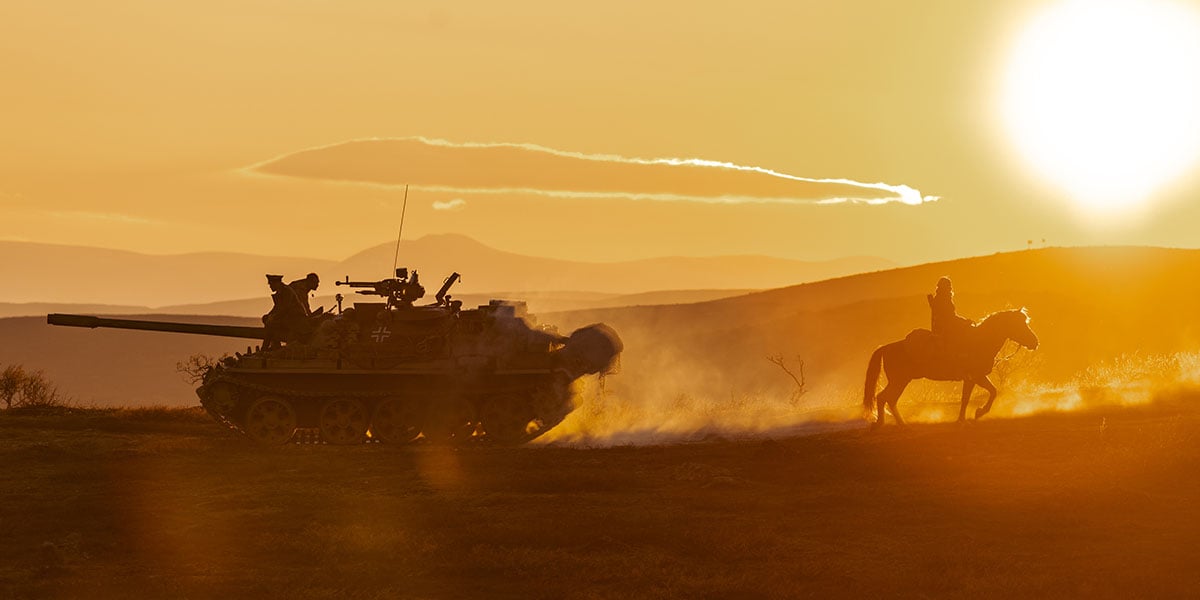 With Jalmari Helander you know what you’re getting. A bonkers action film that leaves no room for subtlety and restraint in its quest to consistently one-up itself. With Sisu, he brings that joyous gonzo vision to the war epic, aiming to bring down a gleefully vicious hammer on the evil of The Third Reich. But this effort markedly frustrates and underwhelms more than it excites, with too much dead air in between its vibrant spurts of bloodshed.

It’s a classic concoction of wild action and weak dramatics, with the latter taking on a more pronounced effect, ultimately diluting the film’s ambition to be a frenzied and delirious foray into Nazisploitation.

Once the film’s bland but endearingly cheesy exposition dump concludes, we are greeted with a solitary prospector who strikes a rich vein of gold in the harsh wilderness of Lapland in Northern Finland, during the final stretch of World War II. Yet, the man runs afoul of a retreating platoon of Nazi soldiers who hope to claim the gold for themselves. What should have been an easy path to wealth is made infinitely more difficult when the man turns out to be a mythic soldier who epitomizes the Finish concept of “Sisu” — an undeterrable and otherworldly form of courage in the face of overwhelming odds. The taciturn man simply refuses to die during his journey of pulverization and obliteration to get his gold back.

With yellow grindhouse-like chapter titles, Helander is clearly riffing off Inglorious Basterds, and Tarantino to a larger extent, but fails to double down on the outrageous action in any way that excites or enthralls. Sure, there are moments of genuinely insane action (with one sequence featuring a Nazi taking a landmine to the face) but they are too few and far between. Moreover, the film fails to build on each of its sequences, with the absurdity on a downward trend as each set-piece is noticeably less exciting and riveting than the one preceding it.

With it being so brazenly bold and expansive in its first moments, Sisu doesn’t live up to its promise, limping to its anticlimactic conclusion, instead of soaring to it on a wave of outlandishly inventive butchery. Instead, the film opts for a derivative stream, culminating in the type of rote one-on-one duels we’ve come to expect, embodying the worst of what the genre has to offer.

With such an underwhelming direction, the film fails to be more indulgent and audacious than its inspirations — doomed to waft in obscurity alongside a swath of other forgotten exploitative action films.

Sisu is at its best when it’s purely cinematic, relying only on sound and image to carry forward its haywire vision. The film distinctly and refreshingly lacks dialogue for great stretches, with the main character not uttering a single syllable until the closing moments. But as soon as one of its bland stand-ins opens their mouths, the film immediately gets worse, releasing the hot air it primarily consists of.

The dialogue and performances are campy at best and distractingly awful at their worst. While established performers like Aksel Hennie nail the tone and delivery of the cliched writing, the rest of the cast doesn’t, failing to tap into the film’s dry Finnish wit naturally. These failings would be trifling if the film wasn’t bogged down and laden with such frustrating filler. Once the action does commence, it’s not enough to make up for the languishing that not only precedes it but follows it as well.

On a purely technical note, the film is sub-par. Beyond its opening frames of stunning Lapland vistas, it is vapidly shot and overedited, with its close-combat sequences bearing the brunt of it. Each set piece plays out how you expect it to— with no dramatic tension or inventive camerawork underpinning the gore. The film depends on its carnage and bad effects to carry it forward solely on the merits of its campy intentions, and to say it leaves a lot to be desired is an understatement.

Couple this with copious amounts of overwrought slow motion and pensive stares into the void, and the result is an experience that comes across like a commercial for something greater, never living up to its full potential as a grindhouse World War II epic. Sisu is best summed up as fleetingly fun, completely failing to embody its titular concept of bravado in a satisfying way.

Pearl is the Rare Slasher Prequel that Elevates its Predecessor

The Rings of Power: “The Great Wave” Requires More Urgency