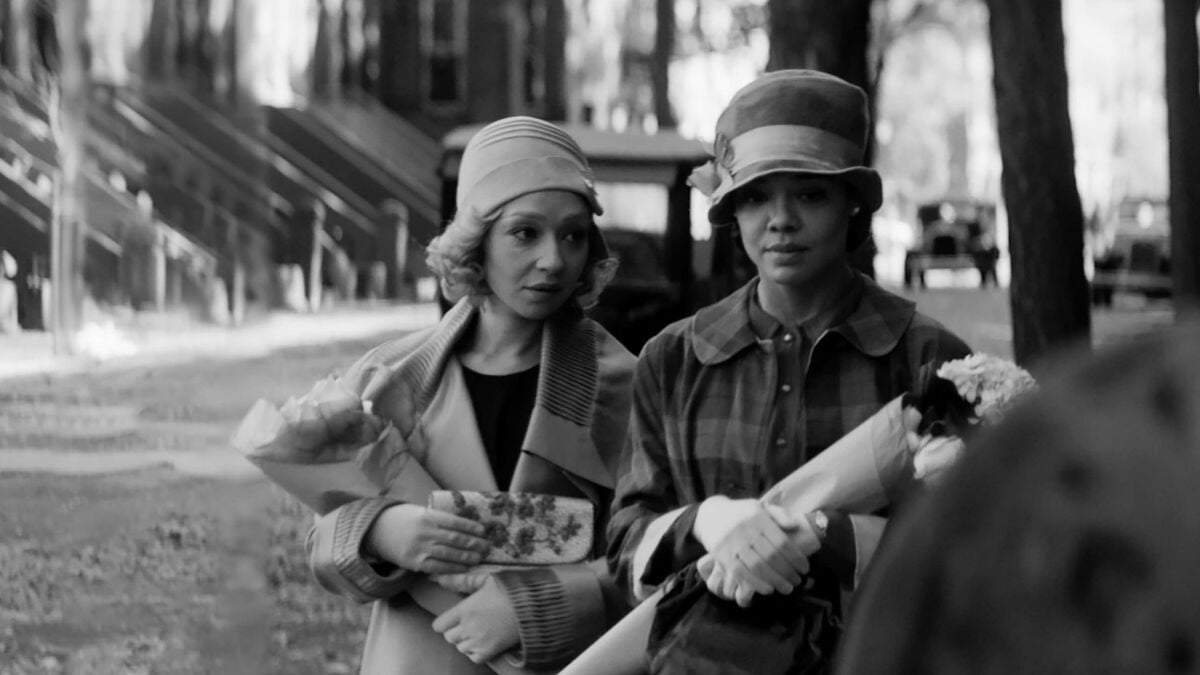 At a point in our lives, we’ve all wanted to be something or someone else. Many of us already are. Whether it’s feeling uncomfortable or insufficient in our own skin, an existential necessity, plain curiosity, or a complex mix, it feels like a universal human desire. Those who attempt to pass as another identity must ask themselves: What are they leaving behind? What if they get caught? And when will they be satisfied?

In the opening sequence of Rebecca Hall’s Passing, Irene (Tessa Thompson), a light-skinned black woman, browses a posh toy store in late 1920s Manhattan. As another customer uses a racial slur to describe a doll, Irene looks on through the brim of her white latticed hat. It obscures her face and allows her to masquerade as a white woman, though she cannot fully indulge in the experience. The aforementioned questions weigh heavily on Irene like an anchor that doesn’t allow her to stray too far from her true self. The same can’t be said for Irene’s childhood friend Clare (Ruth Negga) who’s back in town.

It’s the time of the Harlem Renaissance. Whites are able to move freely between worlds. They come into the Black neighborhoods to enjoy an exotic experience like a holiday. But Blacks going into a white neighborhood is an incursion.

Based on the novel of the same name by Nella Larsen, Hall’s film explores the dualities that exist within us and the tantalizing allure of deception. Passing is Hall’s first attempt at jumping from actor to writer/director. Immediately after reading the book, Hall, who is white, began writing the screenplay. The story resonated with her because her grandfather was a Black man that passed for white, married a white woman, and raised his children as white in a white neighborhood.

His experience aligns with Clare, now fully passing as a white woman, married a white man, John (Alexander Skarsgård), and enjoys all the trappings of the perceived color of her skin, including an open hostility to those with Black skin. It’s that racial animosity that snaps Irene out of her artifice and turns their shared experience into a cautionary tale. Though Irene keeps her distance, Clare is keen on reconnecting with her old friend and reconciling the life she abandoned to live her life of privilege.

Clare is a beautiful, carefree spirit with a magnetic personality. She’s an elegant chandelier that lights up the room and draws attention and compliments from all she illuminates. She possesses the confidence that privilege affords. She’s able to move in and out of Black and white society, never worried about stepping on anyone’s toes. In Irene, she’s found a counterpart and a line back to her wistful past.

Irene and Clare could almost be siblings, drawn together by an indelible bond that belies an inscrutable tension. Clare is the golden girl who people can’t help but love, including Irene’s husband Brian (André Holland) and Irene herself. Her admiration clashes with her reservations about Clare as someone who’s thrown her culture in the gutter and beguiled her husband, two sons, and social circle.

Thompson and Negga are inspired casting for the roles. Thompson’s early sequence, passing for a white woman, plays like a spy thriller and she the agent whose identity could be uncovered at any moment with dire consequences. That complex subterfuge extends to her home life, playing the placid mother whose world has been rocked by Clare. She leads a life of stability and gets upset when Brian informs their children of the violence inflicted on the Black population. Irene sees Clare as what could have been and is tormented by it. She’s jealous of Clare but also angry that she is. Thompson embodies a violin string whose peg slowly turns until the tension is too great and pops. Hall could do with some more impactful displays of Irene beginning to boil over to help propel the story and raise the temperature. Negga brings a perfect princess energy whose core is full of shame and regret. Like Irene, the audience is privy to Clare’s Faustian bargain but can’t resist her charm.

Hall chose to shoot the film in black and white, an obvious allusion to the subject matter but also because it helped to depict the light tones of Irene and Clare’s skin. The frame, in its 4:3 format, presents the women romantically with huge streams of light used to radiate or obscure them.

Passing is released into a world where racial tensions have been somewhat tempered from their height in 2020. The enormous crowds that filled the streets in the wake of George Floyd’s death are over a year old. In order to continue the core message so many proclaimed at the top of their lungs, Black Lives Matter, exploring and highlighting the Black experience in Western society needs to continue. The legacy of those racially passing extends to the deaths of Black lives like Eric Garner, Trayvon Martin, Dominique “Rem’mie” Fells, and so many others that have and will be lost because of the color of their skin.