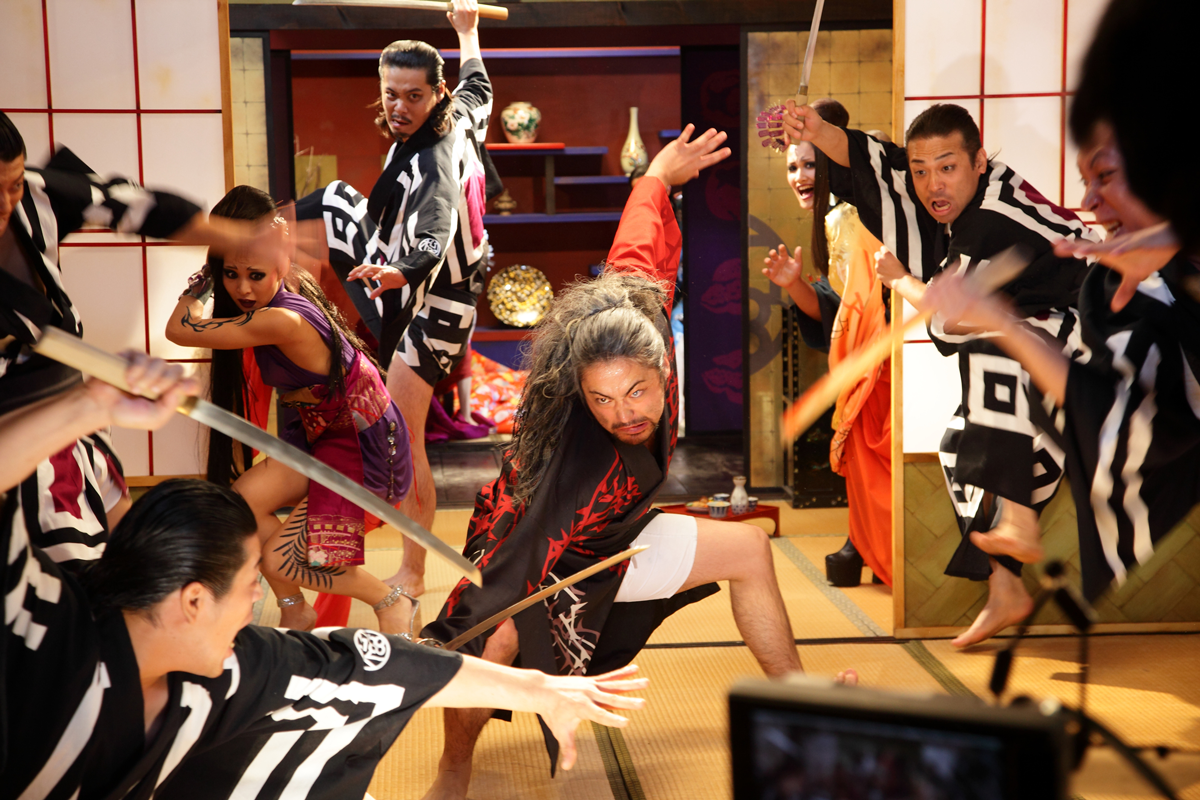 Milocrorze: A Love Story is the brainchild of Yoshimasa Ishibashi, best known for The Fuccon Family TV sketch show, which featured an all-mannequin cast. He’s spent years as a fucked-up video artist, and his first feature film is unlike anything you’ve seen before; a plethora of styles and genres, mixed together in three separate stories about love, obsession, and heartbreak. It is something you will never forget, and features one incredible long take, which happens to also be the best samurai sword-swinging action sequence in quite a while: The continuous shot stands as the highlight of the pic, constantly shifting gears, moving at regular speed, fast-forwarding and jumping to slow motion, before repeating the process over and over again. It’s breathtaking!

The film stars Takayuki Yamada (13 Assassins), playing all three male leads, and kicks off with a fairy tale chapter featuring an androgynous seven-year-old Ovreneli Vreneligare, sporting orange hair and the sort of apparel Duncan Jones received from his dad’s hand-me-downs. The boy, despite his young age, lives a pretty routine life, until one day he falls in love with gorgeous, 35-year-old Milocrorze. From that moment, Ovreneli devotes himself to striving tirelessly, to become an independent respected adult, working 9-5 and becoming an owner of a big colourful house, that resembles the sort of getaway Pee Wee Herman would masturbate to. Sadly Milocrorze has no interest in the lad, and thus the rules of attraction kick in. Yes, love can be cruel.

Milocrorze: A Love Story is at times obscene and outrageous but also sincerely romantic.

As it turns out, this story is revealed to be just a segment on a TV talk-show itself, hosted by a sleazy chap who works as a relationship counselor, with the ego of Magnolia’s Frank T.J. Mackey who advises men who call in on how to ameliorate their approach with the opposite sex. Next on the line is a caller named Besson Kumagai, who happens to be a merciless samurai. Besson, single and lonely, take the talk show host’s advice on how to arouse the ladies and meets the woman of his dreams, Yuri. Sadly not long after they meet, his beloved Yuri is kidnapped and forced to work under the iron grip of a geisha house. The third segment, set in a more familiar samurai-movie landscape, follows Besson, who risks his life and sets out to find the love of his life and take revenge on her abductors. Unrequited love is the overarching theme at play here, and it all comes full circle in film’s unforgettable climax, one that will leave its audience crushed.

Milocrorze is at times obscene and outrageous but also sincerely romantic. Director Yoshimasa Ishibashi streamlines three distinct stories: a peaches-and-cream fairytale, a look into the crazy world of the Japanese idiot box, and an epic quest for vengeance in a timeless Japan – all of which have nothing to do with one another, at least on the surface. It’s jammed tight with a bundle of ingenious visual gags and pop-culture references, from Miyazaki to classical Japanese paintings, strange musical dance numbers, and jaw-dropping slow-motion battles. Yamada’s perfect comic timing and Ishibashi’s wild imagination deliver a devilishly lurid blast of great entertainment. Aesthetically, the film is a work of art, with art direction that would make Willy Wonka’s eyes pop out.