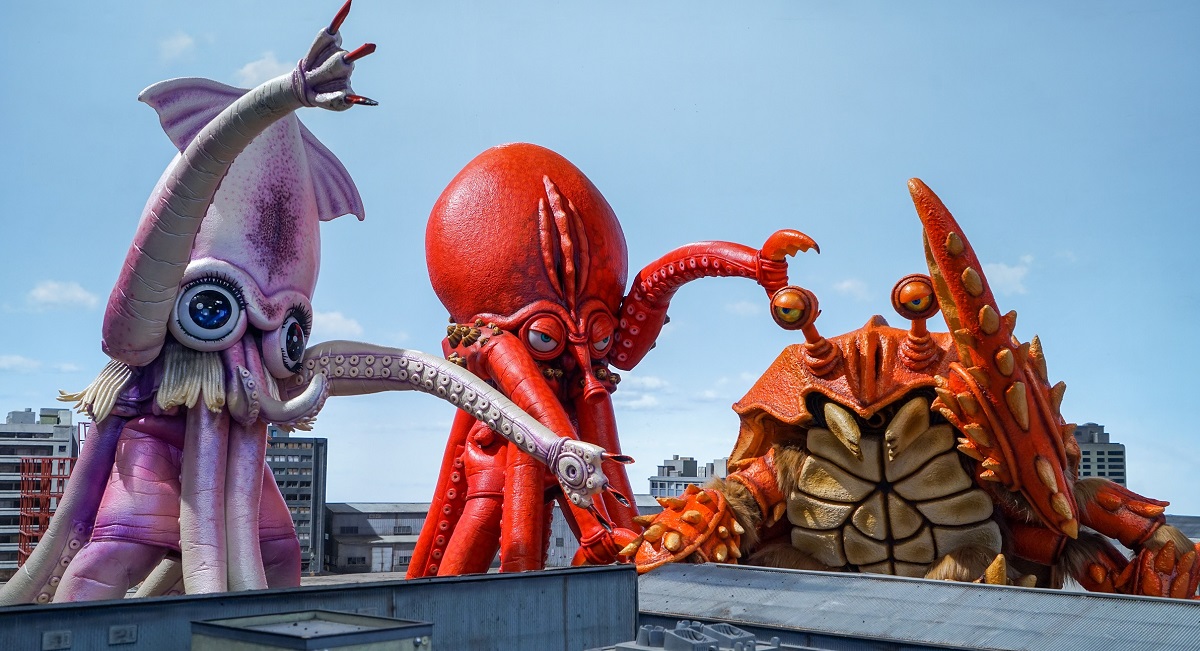 You always know you’re in for a weird time when you sit down to a Minoru Kawasaki movie. To call him an eclectic filmmaker is an understatement, and the director’s campy, often surrealist style easily puts him in the same camp as the likes of Noboru Iguchi or early-career Takashi Miike. His latest film, “Monster Seafood Wars”, appears at first glance to be a low-fi Kaiju romp in which a trio of seafood monsters menace Japan. While it certainly is that in part, Kawasaki’s roving attention span and eccentric tendencies make it a far stranger animal than even the colossal monsters it deals with.

Things start off simply enough when an octopus, crab, and squid are set loose after being dosed with an experimental growth serum. The animals grow to titanic size and a special team is assembled to fight them off. Among this team is Yuta, the inept nerd who invented the serum and kicked this whole mess off, to begin with. In addition to fixing his mistake, Yuta is also determined to win the love of one of his teammates by overcoming his more suave romantic rival.

You’d think that the whole romance angle would be more of a B-plot, taking a backseat to the kaiju mayhem, but you’d be wrong. In truth, the actual kaiju aspect of “Monster Seafood Wars” is relatively secondary in terms of focus. Instead, Kawasaki spends far more time on the human characters. Similarly to his 2006 film “The World Sinks Except Japan”, Kawasaki’s focus is more on everything around the disaster at hand than the details of the disaster itself. There’s an extended segment of the film dedicated to the discovery that the meat of the rampaging creatures is all kinds of delicious, right down to a scene wherein every principal cast member’s thoughts upon their first sampling of kaiju meat are broadcast to the audience via voiceover.

This is where the film may lose some people, unfortunately. Audience members expecting a heavier focus on fun, if low-fi, kaiju antics will almost certainly struggle with some of the film. This is compounded by a lengthy portion of the first third or so being dominated by endless scenes of clunky exposition blandly shot in boardrooms and apartments. The film livens up after this, but it is a bit of a hurdle to get past this early part of the film.

One almost wonders of Kawasaki’s focus on human characters talking problem to death is perhaps a sly critique of the semi-recent Shin Godzilla, which similarly put its focus on human reactions to the crisis rather than the action of the crisis itself. Of course, it’s also just as possible that this is due to budgetary restraints and Kawasaki’s own offbeat tendencies.

Despite its more talky tendencies, Monster Seafood Wars is the kind of movie meant for Fantasia: weird, offbeat, and deeply removed from the mainstream. It won’t be for everyone, and those expecting a pure throwback to 70s kaiju showdowns may walk away disappointed by the film’s somewhat scattershot socio-political critiques and focus on human characters. But when the exposition is out of the way and the film is able to fully let its freak-flag fly, it’s intensely amusing. The only other possible downside is that this is a movie absolutely meant to be watched with a rowdy Fantasia crowd, which sadly can’t happen this year.

Fantasia 2020: Milocrorze: A Love Story Is Unlike Anything You’ve Seen Before