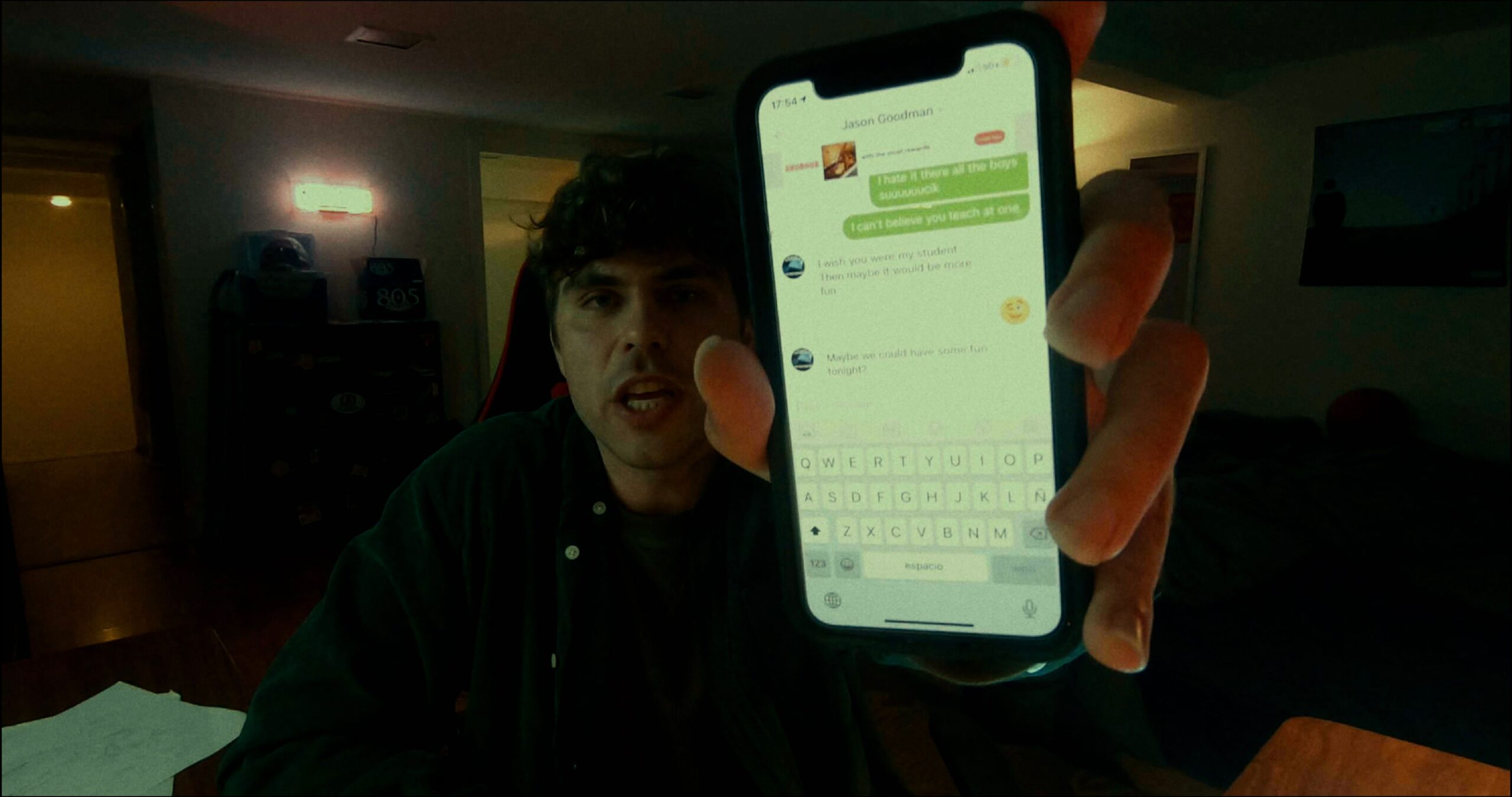 It’s almost impossible to describe the plot of Low Life, even if spoilers weren’t a consideration, because there are so many twists, turns, and layers that muddy the waters of what we understand is happening. You’d have to see it to believe it —and by “it”, I mean the film’s magnificent, impulsive protagonist who constantly raises the stakes in astonishing and frustrating ways.

Scriptwriters Hunter Milano and Noah Rotter entice us with a deceptively basic premise: A local Youtuber exposes pedophiles by pretending to be a young girl over texts, then films himself confronting the men in person; Things go horribly wrong one night when he invites a predator (Lucas Neff, Marriage Story) into his home. But with Low Life, they’ve crafted a story told through a powerful ensemble cast whose loyalty, fears, trauma, and desires chemically react under just the right circumstances. In their hands (through Director Tyler Michael James’ vision) on this fateful night, a simple task turns into something more toxic than we could imagine; personalities and possibilities unraveling in the most glorious ways.

Benny (Wes Dunlap) is a vigilante Youtuber who thrives on the attention and praise he gets from exposing the identities of local men who prey on teenage girls. One of his biggest fans is a teenage girl (Nicole, portrayed captivatingly by Lucy Urbano) with ambitions to be his sidekick, who sees herself as his equal in the battle for justice. Their power dynamics, age difference, and Urbano’s portrayal of the alarming nature inherent in fan culture create an on-screen relationship that fluctuates between corrupting, terrifying, and inspiring.

Two male friends are at Benny’s house for a poker night when he invites the predator over: Seemingly naïve and innocent Sam (Jake Dvorsky), who has a loving husband and newborn child at home, and Ryan (Hunter Milano) a ride-or-die, anything-goes kind of guy who’s just been released on parole, but has no boundaries for how far he’s willing to go to show loyalty to Benny. Then, there’s the mysterious Tim (an eerily-calm Anthony Sorrells), who we met at the opening of the film when Benny tried to provoke him; He did not seem phased by Benny’s “gotcha!” ambush and instead turned the tables on Benny by recognizing him from his high-school basketball days. For some reason, Tim keeps popping up, lurking around Benny’s house and following him around town. Of all these characters, Sam seems to be the only person with a moral core limiting how far he’ll go to achieve their short-term goals.

Benny is an electric livewire, a mess, a powerhouse, a dark horse, and a guardian of the law while brazenly skirting it; He is a man who seems haunted by his past, but he won’t stop rushing forward long enough to confront it. We don’t know —until it’s confirmed at the very last second— what his deal is, but we can’t look away as he raises the risks to himself and everyone around him while leading the audience and his friends to believe that he has it all under control. In every moment of this film, whether he seems confident and focused, or unhinged and reckless, Dunlap delivers a manic performance that imbues in the audience a certainty that there’s a flawed, emotional, vulnerable, genuine human being behind Benny’s actions; It’s quite remarkable and frequently jarring, frankly, for a man representing the kind of abrasive, cocky character so often depicted as a one-dimensional stereotype on screen —and who many of us know as unlikeable in person and on their YouTube channels— to effortlessly win both our trust and belief that he is in it for the right reasons.

Low Life is a spectacular reflection of the fragile male ego in the internet social justice era, and greater than that, it uses Benny’s drive for revenge to showcase the tenacity of today’s teenage girls. In a film filled with aggression and desperately loud voices, the most thrilling scene is near-silent: When we see Nicole frantic and screaming along to loud music in the car while driving Benny home, it’s just as frightening as any of the scenes with guns; We feel unsettled and out of place witnessing her like that, largely because we can sense Benny’s discomfort through the disturbed look in his eyes. It’s a perfect scene because for a long moment a teenage girl is at the center of this insane despicable mess.

Until then, the narrative of Benny’s videos and purpose in life has ostensibly been about protecting teenage girls, so for a moment when he is confronted with the truth of a teenage girl —wild and openly dealing with the emotions and consequences he caused— it’s almost too much to endure. The best (and truest) part of Nicole’s character is that she doesn’t seem helpless or fragile; Even in shock, when she’s afraid for her life and witnessing unthinkable tragedies, she’s comfortable taking the lead. There’s a brief, glorious moment of twisted poetic injustice when Nicole gets involved in cleaning up Benny’s messes, making us wonder whether she should have ever trusted him to enact justice in the first place.

The desperation ingrained into Benny reveals itself when he’s in front of his camera right before it begins to record, and in the delusion rolling off him when he talks about the work he does. Dark moments between Benny’s words, his actions, and the soft look in his eyes when he’s talking about or to Nicole force us to resist a shudder at how closely he suddenly resembles his targets. There’s significance, too, in how nothing Benny does is live-streamed, but rather recorded and edited for upload later; It’s evident that he’s doing this brave, important work only in a way that he can curate and edit.

With fast-paced drama that takes place all in one night, Low Life explores the consequences of a society that allows predatory behaviour to go unpunished; There’s tension in the air the whole way through, but an hour in is when things get batshit wild and your jaw truly drops if it hasn’t already. Then, just when you think things are wrapping up, you realize they are ramping up all over again to a completely heightened degree. The heavy-hitting ending comes fast and hard, unexpectedly savage despite what we’ve been through.

The final shot of this film is brutal, brilliant, enraging, and heartbreaking. Dunlap dominated this role by allowing his character the grace of pain and vulnerability; He played Benny with such dynamic energy and multifaceted, humanizing dimensions that looking at him meant looking directly into a kaleidoscope of devotion, drive, betrayal, and devastation.

Low Life is an unbelievably action-packed ride —and yet it depicts a situation so believable in the culture we’ve built that I’d be unsurprised if a similar case ended up on the news someday soon.