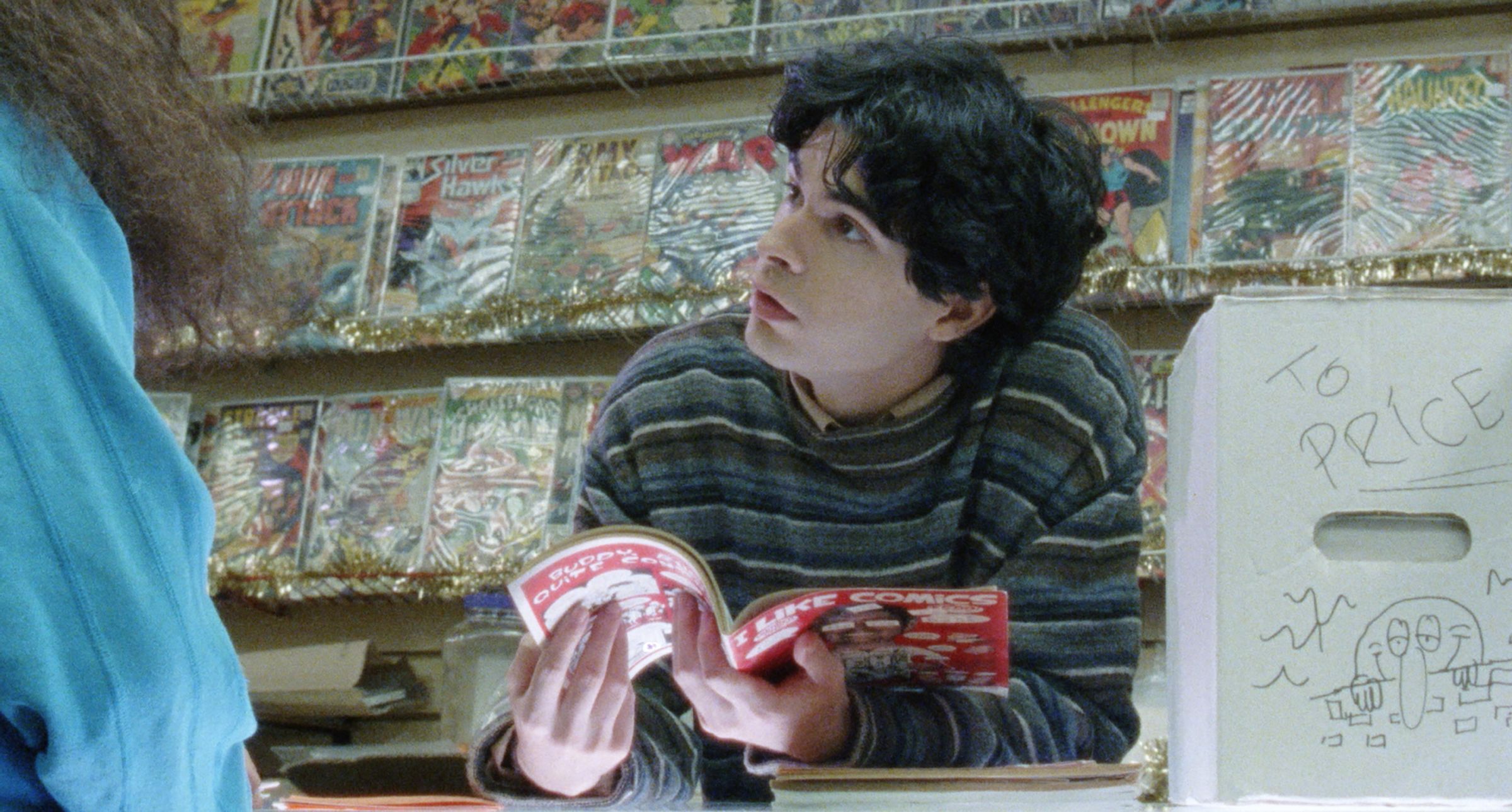 Alternative scenes are named so because they offer something different than their mainstream counterparts. Their constituent work tends to be less polished and more ideologically uninhibited. Alternative comics are usually much more grounded than the spandex and muscle-filled pages from publishers like Marvel and DC, albeit with the same cartoonish exaggeration. They revolve around real people dealing with real problems, an outlet for their writers and artists to explore the ills of society and their uncomfortable place within it. Just as the alternative comics scene provides a subversive counterbalance to the polish of superhero publishers, Funny Pages does the same to the story of the aspiring artist.

Funny Pages feels like one of those “young genii will do what it takes to make it despite disapproving parents” stories. And it is but in his directorial debut Owen Kline satisfyingly sketches an unexpected path.

Robert (Daniel Zolghadri) is certainly our protagonist but where he would be our hero in most interpretations of this story, Kline offers a more realistic version of the aspiring artist trajectory. Robert is an upper-middle-class kid living in the well-to-do New Jersey suburb of Princeton. Being the “Jesus of Suburbia” that he is, he eschews his place of privilege and scoffs at his parents’ bourgeois hopes for him (going to college, getting a job that isn’t a comic artist). His mentor, Mr. Katano (Stephen Adly Guirgis), is an art teacher who encouragingly gets nude in his office to model for the young Robert. His figure is round and covered with hair and protrusions which he highlights with glee. After Mr. Katano’s unexpected death, Robert and his fellow artist pal Miles (Miles Emanuel) break into the teacher’s apartment to abscond with art that Robert believes rightly belongs to him. Robert is caught but gets off easy in court, eventually getting a shitty trascription job with the public defender who worked on his case. This is Robert’s ticket out of his parent’s house.

His exuberant naivety is appealing, like when he stares, mouth agape, in awe at his $63 check, and immediately gets a crowded, disgusting apartment in a decidedly more urban neighborhood in Trenton. Robert is a teen desperate for independence and pursuit of his dream but there’s something else, something less sincere, propelling his actions. The minute he settles into his abandoned hospital utility room of an apartment, he unsheaths his sketchbook and immediately begins drawing. Perhaps it’s a cathartic moment of inspiration from his whirlwind life change but it may also be the sheer romance of the situation.

Kline enlists the talent of Johnny Ryan, Peter Bagge, and Rick Altergott, all associated with alt-label Fantagraphics to supply artistic merit. Like a Fantagraphics imprint, Funny Pages is filled with unsavory and unfiltered characters. Chief among them is Wallace (Matthew Maher), an unstable man he meets working at the courthouse who has experience in the comic industry. Despite Wallace’s aggressive disinterest and general unpleasantness, he eventually capitulates to Robert’s relentless pursuit of his mentorship. At first, Wallace derives some pleasure from his new acolyte/unpaid intern though it’s hidden behind a kind of petulance only grade schoolers and the truly self-obsessed exhibit. Wallace’s volatility, a hallmark of producers Josh and Benny Safdie’s brand, is the pulsing nerve of the movie and gradually intensifies making Robert’s pursuit seem more and more deluded.

The unkempt Wallace sneers at Robert throughout, bringing more attention to his hairlip. The caricatured nature of the characters is another quality of alt and underground comics, with specific attention paid to the grotesqueries of the human form. Robert and Miles are both covered in zits signifying their age while Robert’s roommates are sweaty old men that look as if they eat nothing but expired meat. Cinematographer Sean Price Williams uses a too close for comfort style to reflect comic panels and elicit a general sense of unease. Close-ups and unforgiving lighting accentuate the blemishes and contours of the various walking nightmares that populate Kline’s slice of New Jersey. It really makes you think “wait, why is this kid going this?”

Robert is certainly a postmodern kid who understands that his bourgeois life in Princeton is stifling his growth. His path to glory begins with breaking free from his gilded cage and into a quixotic life of squalor that provides “real” inspiration and experience. For Robert, that narrative is an end unto itself.

He gets into an argument with Miles about craft versus imagination. Miles argues it’s the intangibles of art– the ideas and soul –that are most important while Robert is more concerned with the technical craft, or what the art looks like. For Robert, it’s always about the superficial.

It’s the idea of a starving artist’s life that Robert seems obsessed with. It’s the idea of a mentor that he finds alluring. His blind pursuit of these goals is driven by his passion but catalyzed by the fact his youthful desires have probably always been fulfilled in cushy Princeton. Robert is a spoiled brat whose obsessive pursuit of a lifestyle he finds seductive ends up alienating his family and his friends.

The unpleasant realities of life are laid bare by Kline. It’s an interesting and well-executed coming-of-age story. We get to hang out in a comic book store, live the excitement of a terrible first apartment, and amble around New Jersey (a state I have much affection for). Robert has the scrappiness of a Springsteen ballad subject and like the Boss, Kline doesn’t offer another glossed-over tale of ambition. Instead, he wants us to see that ambition can turn you into a real asshole.