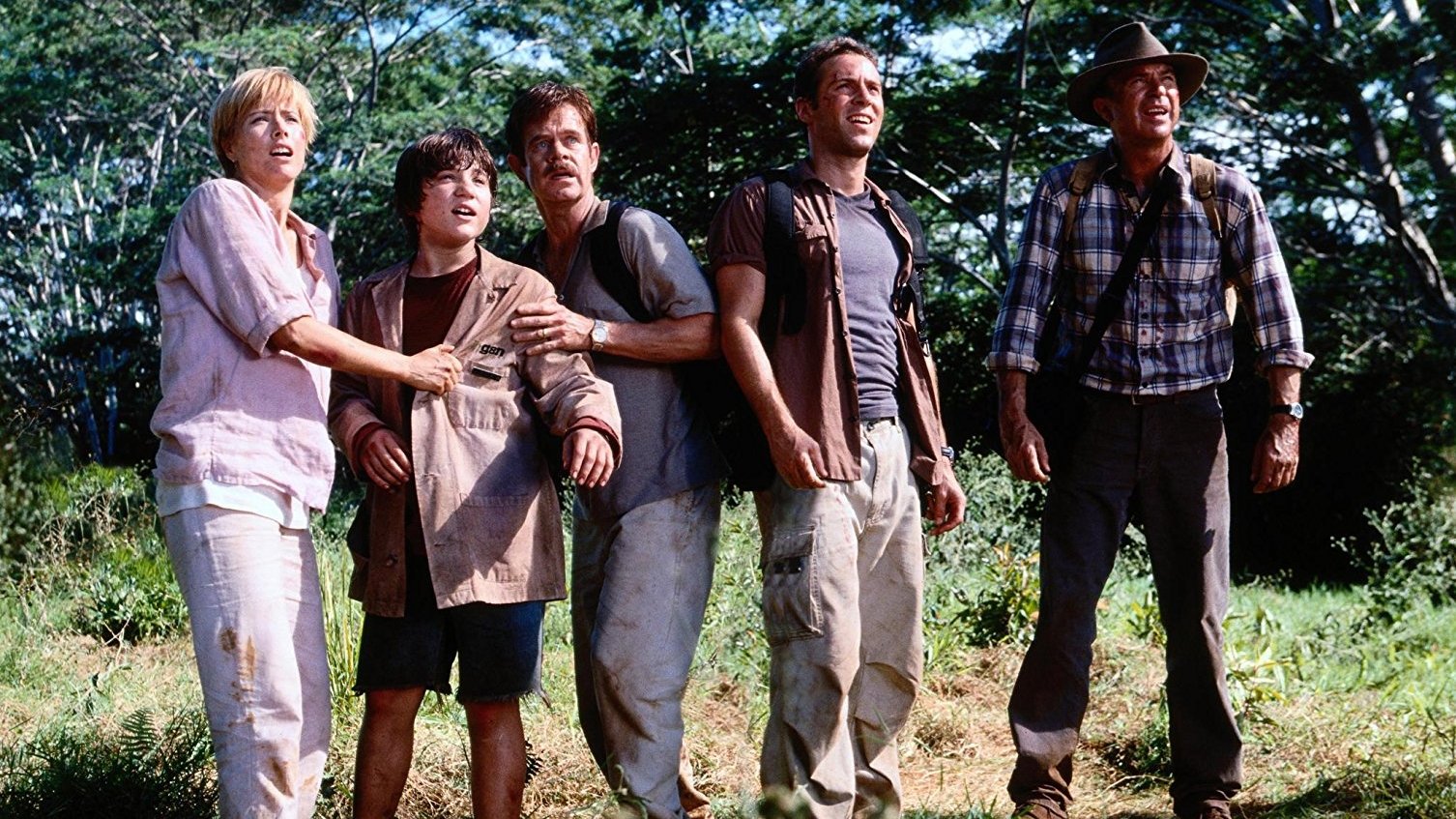 An Instinct for Destruction

Continuing our look at the original Jurassic Park trilogy, we now come to the third film in a franchise that didn’t lend itself to franchising very well in the first place. Simply titled Jurassic Park III (with 3 claw marks!), the film represents the last gasping attempt to milk the groundbreaking 1993 techno-thriller of its fandom after the darker and scattershot turn the franchise took with The Lost World: Jurassic Park in 1997. Released in 2001, another 4 years between sequels, but now long after dinosaurs had captured the movie-going zeitgeist. We’d been through an alien invasion and a disaster movie fad since then and had moved on. We’d cloned a sheep and science was continuing to demystify genetic engineering. If the franchise was going to remain relevant it would have to present us with a new idea, a film that took the franchise into bold, unique territory. Jurassic Park III is not that film.

Jurassic III is such an odd duck that many fans of the franchise don’t even consider it canon. It’s the first film in the series not to be based on a book by Michael Crichton, the first to not be directed by Steven Spielberg, and the first not to be written by Crichton or David Koepp. Stepping behind the camera as dino-hearder this time is Joe Johnston, not a bad choice at all given his own surprisingly satisfying special effects-driven Jumanji has achieved a deserving cult status with time.

The screenplay however is a mess of a different color, credited to first-time screenwriter Peter Buchman (which sounds like s Stephen King’s pseudonym) and another draft credited to Alexander Payne and Jim Taylor, the duo behind such razor’s edge satires as Citizen Ruth and Election. One has to wonder how Payne and Taylor got involved with this or if their shot at big-budget summer movie filmmaking lead to a lost screenplay infused with the duo’s wit now collecting dust in a studio safe somewhere while the final draft had all of the life beaten out of it. These films are half-lifing each other in quality, with Jurassic Park III making The Lost World look inspired.

The plot we are left with is rail thin. This time centering around “Jurassic Park” disaster survivor Alan Grant (Sam Neill returning and managing to keep his dignity) being coaxed to the Site B island, Isla Sorna, by a wealthy couple (Tea Leoni and William H Macy) under the guise of giving the pair of adventurers the tour of a lifetime, but really to find their son, who had been swept onto the island after a parasailing accident. The parasailing accident, by the way, constitutes the film’s head-scratching opening scene in which a boat crew mysteriously disappears and is the first sign this script is full of gaping holes.

One would think that simply appealing to Grant’s sense of compassion to find their son would be easier than concocting a story and basically kidnapping him, but the true identity of Macy (channeling his Boogie Nights sad sack) and Leoni’s Paul and Amanda Kirby is the only mystery the film has to unravel. What we’re left with is Alan Grant stomping through the jungle babysitting two bickering divorcees and a dangerously precocious paleontologist protégé, simply named Billy (Alissandro Nivola), whose backpack has a “lucky strap” with a screenwriter’s neon sign on it that says “This Will Come in Handy Later”.

Blowing out any pretense of tension early, the movie’s first dino encounter is actually with its Big Bad, a massive Spinosauras that attacks the crashed plane fuselage and leads to some bloody deaths. The Spinosaurus promptly kills a T-Rex just to show us who’s boss and spends the rest of the film stalking our heroes across the island, popping up sporadically to the dreaded sound of an eaten ringing satellite phone. Johnston then goes through the rooster of dinosaurs he’s been instructed to regurgitate from the previous films, quickly bringing back the Raptors, with very little fanfare. Instead of carefully assembling dinosaur attacks and milking a set piece of suspense as Spielberg took the time to, Jurassic III shows no love for its action sequences and no awe for its dinosaurs, instead just lining up scene after scene where the group encounters a new dinosaur group and runs to the next one. This entry has the shortest running time of any of the series and at 93 minutes it feels like the longest, awkwardly jutting from repeated encounters with the Raptors and the Spinosaurus.

The film’s best sequence, relatively speaking, brings Ptaronadons into the series, emerging from a fog on a scaffold in all of their massive winged menace. Sequences like this chase in a large Ptaranodon bird cage and a boat trip down a river recall scenes from Michael Crichton’s original book omitted from the original film, making Jurassic Park III feel like a collection of Deleted Scenes from the first film, loosely stitched together. Then, as abruptly as it began, it ends with a climax that once again robs the humans of any influence on the ending. The coup de gras here that saves our stranded group is head-slappingly stupid.

Most frustrating about Jurassic Park III is that it does hint at a few interesting ideas that tie this movie to the previous two, and they all go unexplored. Namely that after the events at the end of The Lost World, the secret is out and the world knows about the island off Costa Rica where dinosaurs roam. Alan Grant has become something of a minor celebrity and apparently, both he and Ian Malcolm wrote books about their experience. Now in a different world where dinosaurs can be studied in their natural habitat, Grant feels like all of his work as a paleontologist is making him an endangered species. Johnston isn’t interested in what this new world would look like instead keeping the film claustrophobically close to Grant. For his character, Grant is still obsessed with the velociraptors and in an opening cameo with Ellie Sattler (Laura Dern) – a cameo that squashes any potential relationship ambiguity between them in the first film – kicks off the film’s desire to add to the Raptor mythos their ability to communicate.

Despite its bloody PG-13 Spinosaurus attacks, Jurassic Park III beats with the heart of a “kid’s movie”, tonally going in the exact opposite direction of Lost World. It’s a movie where a plucky kid uses his resources to outwit dangerous monsters; where his divorced parents are brought back together so that they can remember why they married in the first place; and where the monstrous Raptors aren’t really that monstrous, they’re just parents protecting their eggs.

When you strip Jurassic Park down you get a monster movie at its core. Jurassic Park III is that monster movie, without the layers to strip down any further. It is wheezy, unimaginative movie built on an assembly line that plays out like a special-effects demo reel. Without the talk of genetic engineering, evolution, and Chaos Theory. Without realizing the wonder and terror of the concept that is behind these films. With a cast without any chemistry. If Jurassic Park was a groundbreaking neo-classic and The Lost World was a dumb, fun monster movie, Jurassic Park III brings the original trilogy to an end with a dull, uneventful thud.

The Lost World: Jurassic Park Carries Few of the Charms of its Predecessor