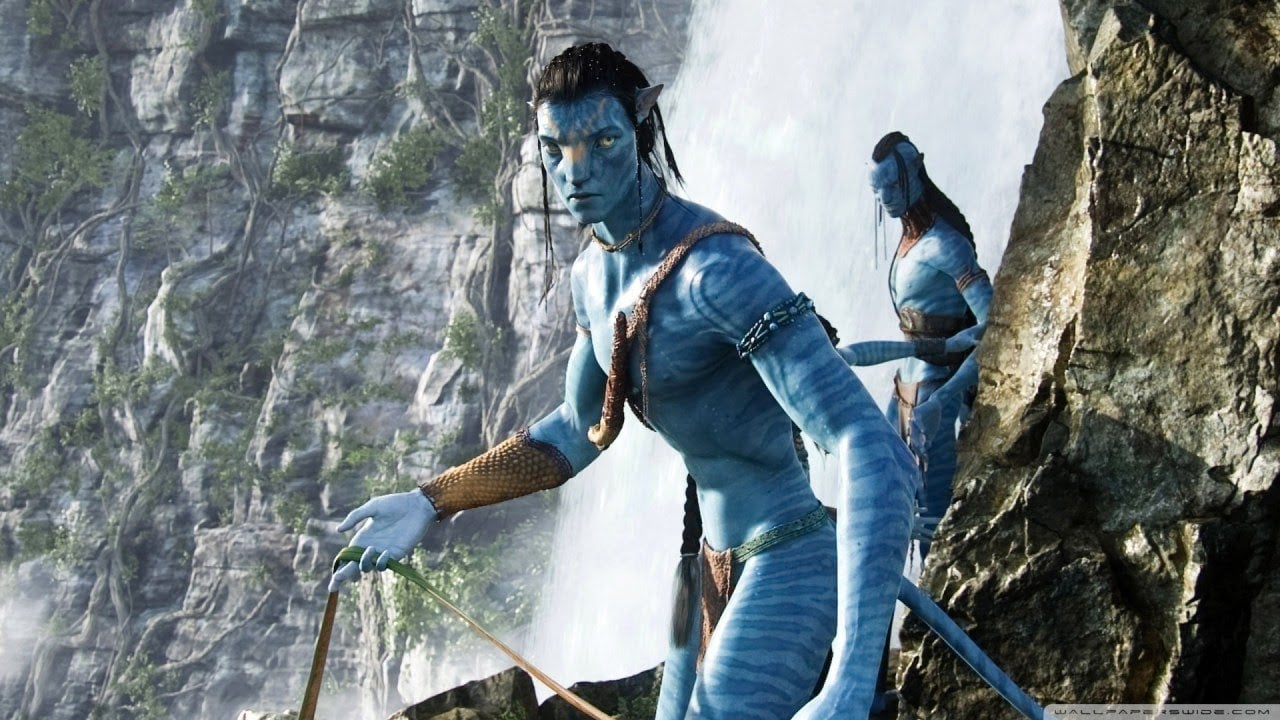 Ferngully with guns. Dances with Smurfs. A PS3 cut scene that lasts for two and a half hours – the knives were out for the biggest film in history (TM), whose budget seems to veer from $230 million dollars to £600 million quid depending on which article you read. Its been twelve years since the wince-inducing, self-proclaimed ’king of the world‘ cannily wielded a romantic weepie for the ladies to some state of the art SFX for the boys that resulted in the most profitable film of all time, in the twelve-year hiatus, Canada’s most famous tyrant has beavered away on a project so visionary that the technology and equipment to realize his vision had to be invented – I think it’s fair to say that James Cameron is not a man without ambitions. The hugely anticipated first trailer for Avatar left the fanboys initially unimpressed; given the tone and tenor of reports coming out from the set, it appeared that the hyperbolic, breathless assertions of film history were in the making was not entirely accurate given the reasonably conventional images that emerged. The second trailer allayed these concerns and was a vast improvement, especially when seen in full 1080p HD, which revealed some of the intricacies and attention to detail that the new technology has captured. Now that the majesty of a decade of technological coups is revealed – stunningly convincing motion capture rigs, lightweight combined 2D and 3D cameras, astonishingly prismatic CGI rendering – Avatar materializes as an unquestionably magnificent achievement; it’s the ’gamechanger’ that was hoped for and heralded a new benchmark in mainstream, big-budget filmmaking. On a purely visceral, action-orientated level, it arguably excels the Aliens and Terminator accomplishments in Cameron’s canon – Are you excited yet?

It is 2154, and the human race is reliant on dwindling stocks of a magical mineral called (a little in-joke) Unobtainium; fortunately, the newly discovered lush, verdant jungle world of Pandorum is rife with the stuff. A military expedition is dispatched to the planet in order to secure essential deposits of the material at all costs, a mission directed by the abrasive Colonel Miles Quaritch (Stephen Lang), who cunningly launches the Avatar program to infiltrate the planet’s indigenous ten foot tall, blue, feline-like race – the Nav’i – in order to assess his foes strengths, weaknesses, and tactical predilections, not to mention ensure the survival of his agents in the planets poisonous atmosphere. Our hero Jake Scully (Sam Worthington) is a paraplegic marine who  is selected as one of the programs test subjects due to the genetic code that he shares with his dead twin brother, who has initially trained for the mission; his consciousness downloaded into the body of genetically cloned Na’vi simulacrum with the promise that he will get his legs back should he successfully complete his task. Seduced by the bewitching beauty of Pandorum, Jake falls in love with the Na’vi princess Neytiri (Zoe Saldana), who teaches him to live in harmony with nature, eventually with the assistance of his colleagues, including the irascible Grace Augustine (Sigourney Weaver) and belligerent Vasquez Trudy Chacon (Michelle Rodriguez) leading her people in an insurrection against the military colonist invaders.

For all the film’s visual strengths, the weaknesses are plain – the conventional plot, in its entirety, can be gleaned from the trailer; thus, there are no real surprises from a narrative perspective. Cameron has also absorbed some of the Lord Of The Rings franchise story beats, which isn’t necessarily a bad thing but does make for some standard-issue ‘epic’ scenes in the final act; perhaps his choice of turning to WETA to provide the majority of the CGI pyrotechnics have had some subconscious input. As you’d imagine, the eco-hippie, Gaia mother earth stuff is overdone and is faintly insufferable, Cameron serving up some mature slices of cheddar in the vein of the thumbs up from T2 and slushy romance of Titanic whilst the song that plays out over the final credits needs to have every copy on the planet collected together and hurled into the nearest active volcano. Then again, for my part, this was all anticipated; this is an immensely expensive project and, as such, has to appeal to the broadest possible demographic; alas for the film connoisseur, this means choking down some McDonalds amongst the Beluga caviar and Kobe beef steaks, cinematically speaking. In terms of spectacle, however, of a film event where the noise of a few hundred jaws hitting the floor is repeated again and again as we are incrementally drawn into an alien world, it is unsurpassed. Judging by the audible gasps emitted in the theatre, I and numerous members of the audience quite literally could not believe what we were seeing when the film found its stride and the infiltration of this magical world began in earnest.

If you’re fortunate enough to have a functioning memory and are of a certain age, then you might remember how exhilarated, how awed and dumbstruck you felt upon exiting the cinema after seeing The Empire Strikes Back – this movie equals and replicates that feeling. It is stunning, devastatingly, utterly bewilderingly stunning on a visual level; as Ebert posited in his recent review, Cameron may be one of the only contemporary Hollywood filmmakers where you can see all the money on screen in all its digitally mediated splendour. Avatar engulfs you in the teeming, humid world of Pandorum with all its variegated flora and fauna, the immersive 3D – all those motion blur and ghosting worries are immediately dispelled – like Scully is on-screen transportation into his Na’vi host simultaneously transports Cameron’s congregation to an alien planet, into a fully realized and tangible realm akin to Dorothy’s Oz – clearly we are not in Kansas anymore. Cameron has finally nailed that uncanny valley problem, the reaction to the images that prompt a ‘wow, that looks like a great piece of effects’, being surpassed and taken to the next level where the indigenous denizens and the world of Pandorum are a living, breathing entity. The motion capture breakthroughs lead to real characterization, the eyes and facial textures are convincing, and there is a soul and plausibility to the Na’vi and their Avatar kin which are immediately recognizable as incarnations of their human progenitors, an interesting meta-mirror to one of the films timely concerns – in years to come the film will be analysed as being a film of its time not merely with its embrace of an ecological message but also the nods to a society that increasingly mediates its relations through artificial representation via MMORPGS and numerous, pervasive methods of electronic social media. It’s simply astonishing with the teeming planes of the image also evading that tiresome, forced visual pollution that poisoned the Star Wars revisions and their tiresome ilk – the bar has been indisputably raised, and the likes of Spielberg, del Toro, Zemeckis, and Jackson will be operating under its shadow for the next few years.

The allusions are obvious – an indigenous species invaded and exploited by an aggressive force who desires to rape and pillage their natural resources, a protagonist of the military-industrial complex changed by the exposure to a more holy, more (dare I say it) earthy ideology, Vietnam, Iraq and the genocide of the Native American Indians are all alluded and referenced to in an admittedly clumsy fashion at certain points – lines like ‘we will fight terror with terror’ and ’we will commit a pre-emptive strike’ are perhaps just a little too obvious – but this is Hollywood, and these shortcomings can be sacrificed on the altar of pure, unadulterated entertainment. The middle section of the movie is perhaps the most immersive and affecting; that is where the film really expands and aggregates its breakthroughs as Jake is absorbed into this distant, exotic sphere; for the Cameronistas, there are plenty of his customary motherhood analogies and assertions on the hubris of mankind’s attempts to assert itself over nature that similarly litter his previous projects. The final battle is executed with customary skill, the action sequences equalling the film’s progressive visual agility, climaxing on a set piece that explores the perils of sending an incapacitated hero into a tactically flawed war theatre that any reasonably acute film fan would anticipate yet enjoy for its inherent, dexterous possibilities. Cameron has accomplished that rare task, to inject a real sense of magic and spectacle sorely lacking in big-budget movies, aptly bookmarking the prologue and finale of the film with the image of eyes opening, an apt cinematic metaphor for his triumphant return to the multiplexes. Treat yourself, leave your objections at the door and let yourself be overwhelmed by Pandorum on the biggest screen possible – it’s history in the making.

Attack of the Clones Is Better Than You Think