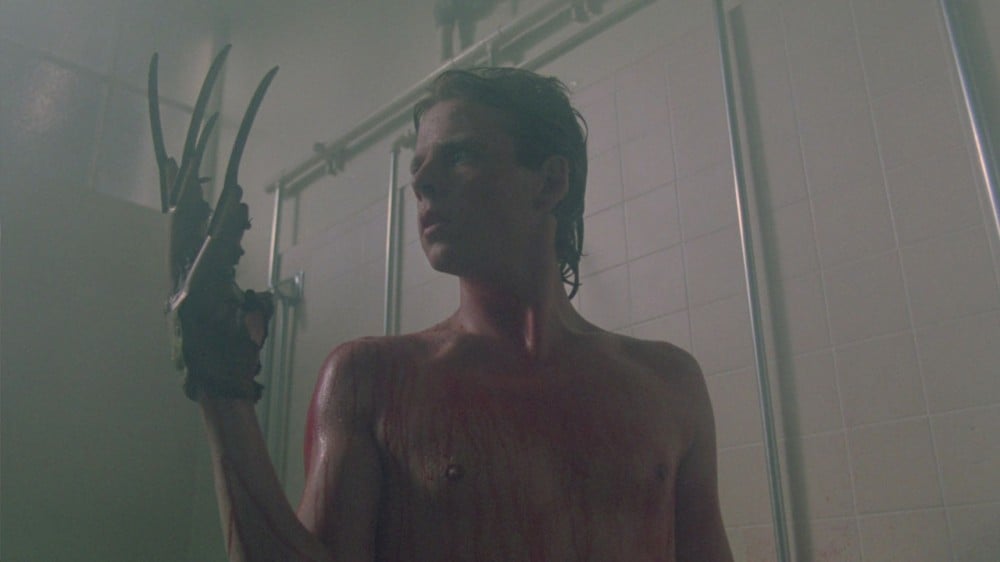 Horror As Metaphor: A Nightmare On Elm Street 2: Freddy’s Revenge

After the surprise success of A Nightmare on Elm Street, there was no doubt in the studio executives’ minds that a sequel had to be made. After Nightmare’s creator, Wes Craven, dropped out (citing his belief that the film didn’t need a sequel), David Chaskin was brought on board to write the script and Jack Sholder (Alone in the Dark) was tapped to direct. Set a couple of months after the original, the sequel revolves around teenager Jesse Walsh (Mark Patton) and his family, who have just moved into the troubled house that belonged to Nancy Thompson, the previous film’s heroine. Freddy, far from being defeated, soon pays Jesse a visit in his dreams, telling the teen the many plans he has in store for him. Freddy wants to come out of the dream world and into reality and Jesse is the perfect tool; just weak-minded and powerless enough to help Kruger achieve his goal. Soon enough, those closest to Jesse begin to die in horrific ways and Freddy/Jesse begins his sick rampage all over again.

The Man of Your Dreams Is Back…

While this all sounds like standard sequel fare, what separates A Nightmare On Elm Street Part 2: Freddy’s Revenge from the rest of the franchise is its hidden homosexual subtext, which screenwriter Chaskin deliberately and subtly sprinkled into the story. For example, take the character of Jesse. He is uncomfortable around girls, a little bit too chummy with his hunky jock friend Grady and, in one scene, dances and sings along to Fonda Rea’s inane disco hit “Touch Me (All Night Long).” Probably the most overt reference is the scene in which Jesse wakes to find he has sleepwalked into a leather S/M bar where he unexpectedly bumps into his brutish (and obviously gay) gym coach. After hauling the kid into the school gym to make him run laps as punishment for discovering his dirty little secret, the coach meets his end at the hands of Freddy who strips him naked in the shower stalls and whips him to death with a jump rope. In another scene, Jesse’s friend-who-happens-to-be-a-girl tries to make out with him at a party and Jesse freaks out. He sneaks into Grady’s house where he tells his shirtless fiend that “He’s inside of me, and he wants to take me again!” In this case, Freddy can be seen as a stand-in for Jesse’s closeted homosexuality trying to break free. Being a teen, he is going through some severe hormonal upheaval and encountering a knife-gloved maniac is the least of his problems.

All of this flew by the heads of the cast and crew while they were making the film and it was only until later when fans and reports began asking them about the hidden subtext that they began to realize the true theme of the film. Chaskin never liked to openly admit to his part in the film’s subtext, choosing instead to blame actor Mark Patton (who is openly gay). Patton said in an interview that “[Chaskin] would just blame me any time it came up alluding to something along the lines of, ‘Well, he’s a big old fag and he chose to play the part in a big old fag way.’” Eventually, when Never Sleep Again, a documentary that thoroughly explores every facet of the Nightmare series, was released in 2010, Chaskin fessed up and took sole responsibility.

If one were to take A Nightmare On Elm Street 2: Freddy’s Revenge on its own terms and not think of it as a direct sequel (Freddy is in only 13 minutes of the movie’s 85) the film packs enough wit and suspense to warrant a closer look. Despite Chaskin’s lack of character and early refusal to admit his involvement, the man must be commended for taking a chance in writing a gay horror film in a time when the topic was still a seeping wound. When the movie was released at the tail end of 1985, the AIDS virus had just begun to invade America, and for a moment, Freddy Kruger became something more than a wise-cracking boogeyman. He became a symbol for the evils of repression and the self; that no matter how hard you try to fit in, you’d only be doing yourself more harm than good.

The Last Mercenary is a Reverential, Entertaining Throwback

The Unjust is One of the Grimmest, Darkest Crime Dramas