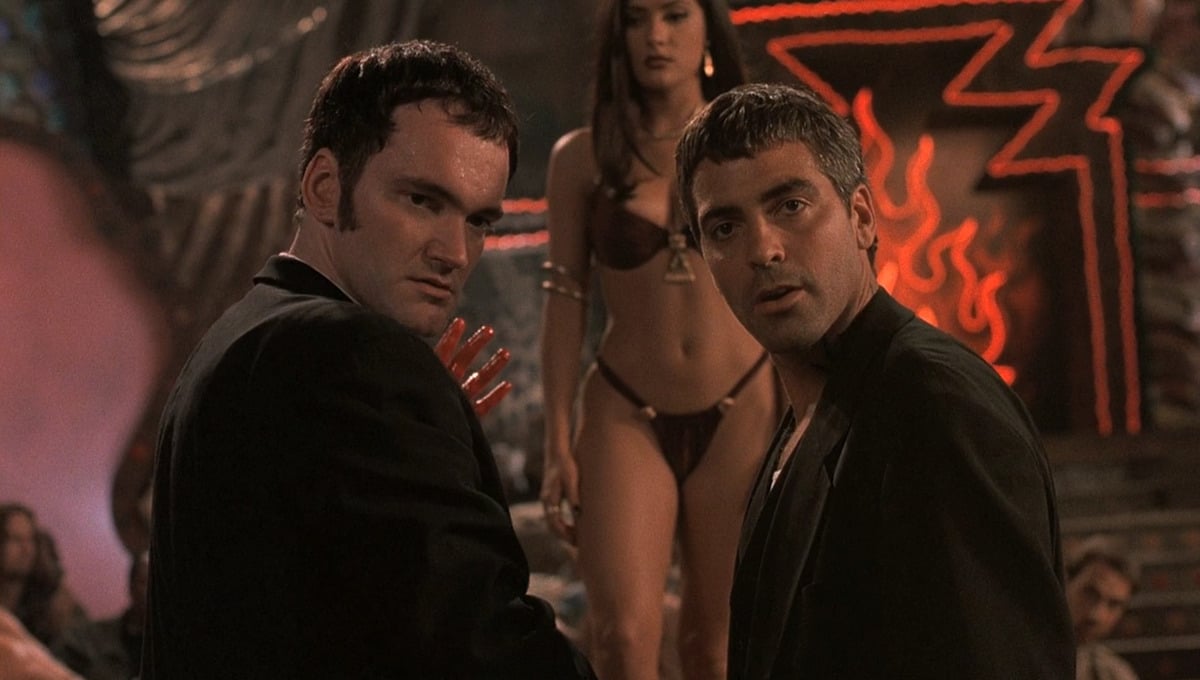 From Dusk Till Dawn has always had a special place in my heart. I first watched it after a trip to the local Blockbuster with my parents, who had never heard of the film. Lo and behold their stunned reactions when the film reached the vampire territory included in the marketing but totally shocking to anyone who hadn’t seen a commercial for the film.

It’s one of my favorite movie watches ever, and one I’ve replicated over and over again with other folks who were unfamiliar with From Dusk Till Dawn. If that includes you, let me back up a bit here and give this film a proper introduction.

Written by Quentin Tarantino and directed by Robert Rodriguez, From Dusk Till Dawn is the first of many collaborations between the two filmmakers. Best known at the time for their respective breakout hits, Pulp Fiction and Desperado, the horror-crime throwback would be their chance to blend their unique genre styles together.

Was the collaboration successful? Well, that depends on who you ask. I’m sure you’ve already gleaned that this writer has an unabashed love for From Dusk Till Dawn, however, not everyone is so enamored with the film. Notably, Rotten Tomatoes has it listed with a barely positive 62%.

Much of this is probably due to the aforementioned shift in the film’s direction just past the halfway point. While From Dusk Till Dawn begins as a crime movie about two brothers on the run from the law, it morphs into a nasty vampire bloodbath by the end, leaving many viewers gobsmacked in the process.

Ultimately whether From Dusk Till Dawn works or not breaks down to the success of its many parts. First off, this is an exploitation picture through and through. Modern takes on the genre, most popular in the 1970s, are always going to be jarring because not everyone has the context of a film nerd to make sense of what the writer and director are intending. Further, some will naturally question the decision to bring the genre back at all.

On that note, of course, we’d be remiss if we didn’t address the elephant in the room. Yes, Quentin Tarantino has had his reputation skewered a bit in recent years and the fact that this film has him literally sucking whiskey off of Salma Hayek’s toes (in a scene he wrote) doesn’t necessarily help matters.

I think we can all agree that Tarantino is at his best when he’s behind the camera rather than in front of it. Having just written a somewhat problematic character that he also played in Pulp Fiction, one gleans that maybe Tarantino sees himself as taking the bullet so no one else has to play these characters. Still, the optics are not endearing.

Luckily Tarantino’s batshit script more than makes up for these shortcomings. Peppered with enough one-liners and quotables for 6 scripts, Tarantino’s screenplay is arguably one of his best, if not his most fun by a long shot. Some personal favorites include: “I will turn this place into the f*cking Wild Bunch”, “Now let’s kill that f*ckin’ band”, “Anything you got to say to them… say to me first.” and “Psychos do not explode when sunlight hits them. I don’t give a f*ck how crazy they are!”

An unforgettable exploitation picture and a totally fun and nasty ride, From Dusk Till Dawn, is still a total blast today and well worth revisiting…

Obviously, the above sampling clears things up if you were wondering about the number of expletives in From Dusk Till Dawn. This is absolutely a grown-ups only affair, with swears being the least of the reasoning. Gruesome deaths, horrific violence, and a smattering of nudity also make the film a midnight movie for the ages.

From Dusk Till Dawn was also, notably, the first step in the George Clooney experiment. Though it may be hard to imagine a time when the massive movie star was a barely known cable actor, 1996 was absolutely that time. Best known for his work on the hospital drama E.R., this movie was Clooney’s chance to show what he was truly capable of.

Obviously, the results of that experiment are history now. George Clooney was catapulted into the stratosphere of A-listers and has remained there for the 25 years since. It’s not hard to see why. Though Seth Gecko is undeniably a bastard (he even says so himself at the tail end of the film), Clooney embodies him with enough oozing cool and dangerous charisma to make him likable, despite the terrible things he’s done.

The supporting cast is filled with memorable performances as well. Obviously, we’ve got headliner Harvey Keitel putting in stellar work here. Arguably the film’s MVP, Keitel’s role as a faithless preacher who needs to ante up and fight true evil is one of From Dusk Till Dawn‘s greatest strengths, and Keitel embodies his character with a salt of the earth charm that makes him instantly relatable.

Other memorable supporters include Juliette Lewis as a kidnap victim rolling with the punches, makeup artist and legend, Tom Savini, as a whip-wielding biker, blaxploitation star Fred Williamson as a Vietnam vet, and unstoppable killing machine, and Cheech Marin in three notable cameos. Rodriguez favorites like Danny Trejo and Salma Hayek also appear.

Of these, Savini and Williamson make the biggest impact. More or less unknown to all but the biggest cinephiles, Williamson and Savini still slay in their respective roles, no pun intended. While Savini’s Castlevania whip and a crotch-mounted gun make him an easy fan favorite, Williamson is arguably even better. Watching him literally rip the still-beating heart out of a vampire’s chest or flip over a table and kill one creature of the night on each of its four legs makes for fantastic entertainment.

It is also that no one in From Dusk Till Dawn doubts for even a second that they are dealing with vampires. Despite the more demonic, monstrous take on the creatures here, no time is wasted with characters debating what these horrific monsters are. No “walkers” or “freaks” talk like The Walking Dead here, these characters live in our reality and immediately recognize what they’re fighting.

Really it’s these checks and balances of Tarantino’s script that make this movie work. Rodriguez’s direction is absolutely on point as well but without QT’s snappy script, it’s debatable whether a film this weird could ever work.

I mean who can resist a script that has bananas vampire-fighting ideas like a Super Soaker filled with holy water or an industrial hammer drill with a stake for a bit. The piece de resistance is a bat and shotgun combo that makes for the most ass-kicking cross in human history but this screenplay is just wall-to-wall ingenuity.

Fortunately, it does work and, because it does, we’ve got a genre-blending bloodbath of a film that still works 25 years later. An unforgettable exploitation picture and a totally fun and nasty ride, From Dusk Till Dawn, is still a total blast today and well worth revisiting.

From Dusk Till Dawn – Horror and the Tarantinoverse

Fans of Liam Neeson will Love The Marksman