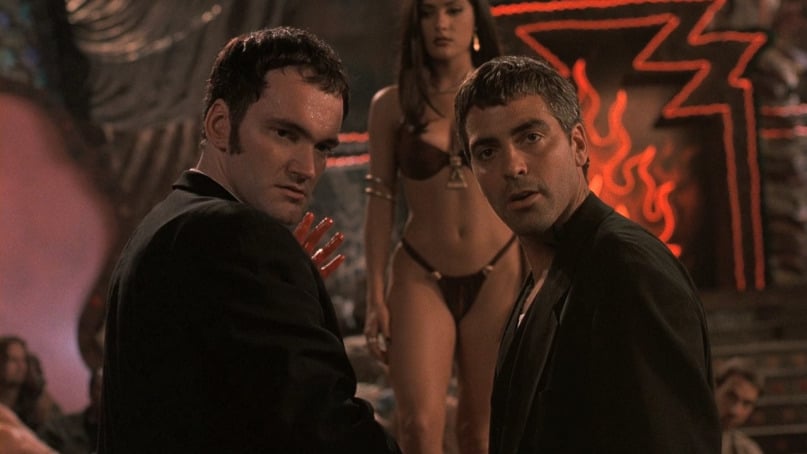 25 Years Later: From Dusk Till Dawn

There is a strong possibility that Quentin Tarantino has forgotten more about movies than most film buffs will ever know. In addition to sporting an encyclopedic knowledge of all things cinema, he is one of the most talented and respected filmmakers of his generation. What’s more amazing is that the auteur director has left an indelible mark on Hollywood while staying true to his artistic vision. Think about this: Tarantino continues to rack up critical acclaim — Oscars, Golden Globes, and BAFTA awards and nominations — for making genre pictures. If Tarantino retired today, pulpy crime thrillers, dusty westerns, and blood stained revenge fantasies would define his legacy.

In the context of Tarantino’s career, it makes perfect sense that The Hateful Eight, his most polarizing film, would follow Inglourious Basterds and Django Unchained, his two highest-grossing films. While superstar directors often work with a high degree of autonomy, back-to-back films grossing a combined $700 million and universal critical praise translated to Tarantino receiving creative carte blanche. With enough clout, career accolades, and financial flexibility to do as he pleased, Tarantino decided not to chase commercial success. Instead, he opted to create a small-scale, intentionally divisive social commentary. His choice is not without precedent. 25 years ago this month, while still a director on the rise, Tarantino made a similar decision.

Released on January 19, 1996, From Dusk Till Dawn is a cinematic tag-team between Tarantino and his frequent collaborator, director Robert Rodriguez. The film features a script by Tarantino, who at the time of production was still riding high on Pulp Fiction‘s colossal wave of success. Critics and audiences crowned Pulp Fiction an instant classic; the film injected 90’s cinema with a shot of adrenaline akin to the big-ass needle Vincent slams into Mia’s heart during Pulp‘s infamous overdose scene. While Hollywood expected the young director to get right to work on his next masterpiece, he and Rodriguez had other intentions. Instead, the duo created a trashy, low-budget genre flick featuring Tarantino’s trademark snappy dialogue, over-the-top violence….and vampires.

We can define Tarantino’s career by his numerous crusades to preserve and pay homage to the cinema of his youth. Grindhouse cinema is one of Tarantino’s central creative influences, and From Dusk Till Dawn is his attempt to share his love of the genre with a new generation of cinephiles. When From Dusk Till Dawn made its debut in the mid-nineties, multiplexes, cable TV, and video-store franchises had virtually wiped grindhouse cinema off the map. At the time, the public viewed arcades and grindhouse theatres as seedy places inhabited by burnouts and criminals. Facing the wrath of churches, politicians, and freaked-out soccer moms, small indie-cinemas had to shut down. Sure, the hardcore cinephile could find ways to get their low-budget exploit movies fix, but even they lost out on the communal experience derived from sitting in a dark room with 200 enthusiastic, like-minded movie fans.

From Dusk Till Dawn took the best elements of sordid, exploitative grindhouse films, and packaged them for an audience starved for a genre movie fix — as well as a younger audience that didn’t know what they were missing. From Dusk Till Dawn‘s budget could have produced several dozen of the films it was channeling, and the production put every penny of it to use. Tarantino and Rodriguez made sure that their film hit all the beats grindhouse cinema fans could want (there’s a scene where a teenager begs to die while pubic-hair toting vampire-beasts eat him alive). Despite the gore, violence, and naked fiends, the feature didn’t dive so far down the grindhouse cinema rabbit hole that it wasn’t accessible to mainstream audiences.

Tarantino began introducing links between his movies in the mid-nineties, and From Dusk Till Dawn played a large role in establishing the connective tissue that binds the Tarantinoverse. In From Dusk Till Dawn, Michael Parks plays Texas Ranger Earl McGraw, an ill-fated lawman who meets his demise at the hands of the Gecko brothers — Earl and his son Edgar would eventually pop up in Grindhouse and Kill Bill. Later on in the film, Seth (George Clooney) steps away to grab some lunch and returns with Big Kahuna Burgers, the burger franchise made famous by Pulp Fiction‘s Jules when he munches down and declares, “This is a tasty burger.” Almost 25 years after showing up on the dashboard of the Gecko brother’s car, Red Apple cigarettes receive a shameless plug in The Hateful Eight. Sex Machine’s (Tom Savini) penis pistol and Chango beer even make the leap from Tarantino’s From Dusk Till Dawn script to Rodriguez’s Desperado. While these crossovers aren’t integral to the story, they add a narrative heft that makes the world seem lived in and the characters feel more fleshed out.

One of the main reasons From Dusk Till Dawn works so well is its spot-on casting. The film features a combination of solid character actors (Michael Parks, Harvey Keitel), beloved genre icons (Tom Savini, Fred Williamson, Cheech Marin, Danny Trejo), and future stars (Salma Hayek, George Clooney). From Dusk Till Dawn’s deep cast also delivers a number of memorable performances; Michael Parks carries the opening scene with all the swagger of the movie’s hero, only to get blown away five-minutes later; Cheech pops up three times playing three different characters; and who can forget Salma Hayek’s seductive entrance as Santanico Pandemonion?— one of the film’s sexiest introductions ever. In addition to a solid cast of role-players, From Dusk Till Dawn is notable for serving as the launching pad for George Clooney’s movie career. The film rocketed the then TV star into the Hollywood A-lister stratosphere, where he has remained for the past two decades. On the opposite end of the spectrum, the film helped Tarantino satiate his desire to act. While he still regularly pops up onscreen, Tarantino has come to terms with focusing his creative energy on his work behind the camera.

A true love letter to cinema’s bygone era, From Dusk Till Dawn is what happens when two visionary directors join forces to pay homage to the movies that inspired them; a cinematic throwback that’s also ahead of its time. From Dusk Till Dawn was far ahead of the curve, foreshadowing modern film’s over-reliance on recycling fondly remembered movies, TV shows, and games of yesteryear. While From Dusk Till Dawn isn’t a literal reboot, it captured the spirit of a past genre and repackaged it for new audiences. The movie is also notable for featuring numerous Easter Eggs linking Tarantino’s filmography. Finally, From Dusk Till Dawn stands out for its solid cast, particularly the film’s lead, George Clooney, an actor that never dove back into the murky waters of pulpy, grindhouse-style filmmaking. From Dusk Till Dawn is the rare genre mash-up that is equally effective on multiple levels, a film that unravels in a crime-ridden nightmare scape that never fails to excite.

Editor’s Note: This article was originally published on March 12, 2017.

From Dusk Till Dawn at 25: One Hell of a Genre-Blending Bloodbath