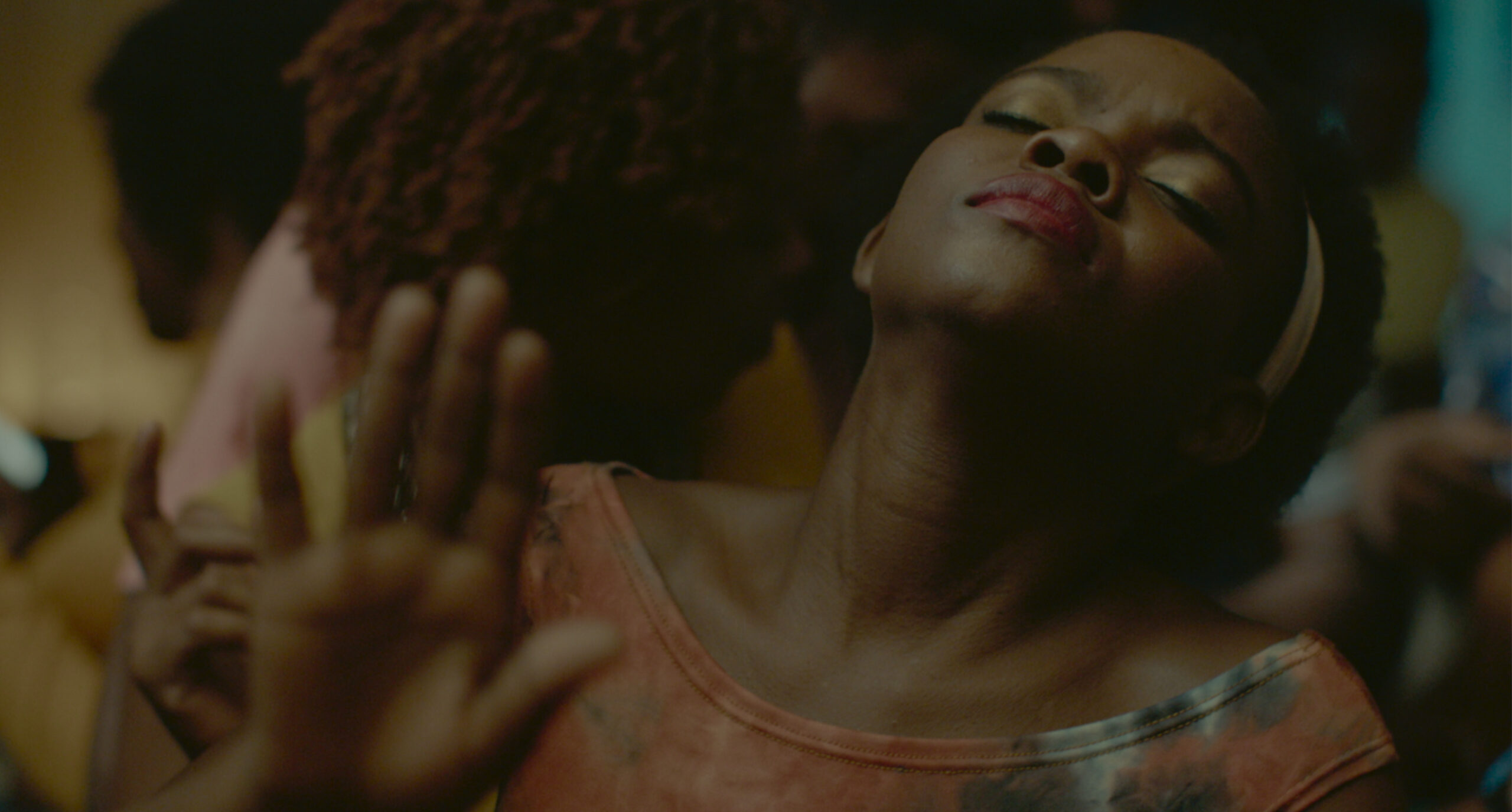 What do you do when your home becomes a toxic place? When the ground struggles to nourish. When discord replaces harmony. When its containment no longer provides safety. It traps you in danger, resembling more of a prison than embrace. Do you stay or leave? These are the questions the characters in Géssica Généus’ debut feature, Freda must answer.

The story of Freda originates from Généus’ outstanding screenplay and exists in the very real disorder of today’s Haiti, the writer/director’s home country. The country’s remarkable origin gave way to decades of turbulence, most recently exhibited in a presidential assassination. Généus offers a provocative view into the humanity that exists within the headlines and history of one of the poorest countries in the world. She expertly crafts an exploration of the gentrification of Black spaces and Black bodies with an impassioned understanding. She does this through a family’s struggle to find peace & happiness and reconcile what it means to be Haitian.

Freda lives with her family in the slums of an increasingly volatile Port-au-Prince. She cares about her education and the future of her crumbling republic. Freda, her materialistic brother Moïse (Cantave Kerven), and promiscuous younger sister Esther (Djanaïna François) make ends meet by working in the small shop at the front of their house along with their Evangelist mother Jeanette (Fabiola Rémy). The siblings each pursue their idea of happiness among the growing chaos. One by one, they are given a chance to leave the dangerous Port-au-Prince behind. Freda wrestles with her faith and allegiance to the failing institutions she holds dear.

The conundrum of identity for Haitians goes back to the country’s triumphant genesis. Established as a slave colony, the French tore Africans from their homes to exploit the land’s resources alongside the conquered indigenous people. In one of Napoleon’s most crushing defeats, Haiti became the first nation to gain its independence through a slave revolt, becoming the first Black republic. The country then weathered decades of political instability, crippling debt, occupation by the United States, and authoritarian regimes before it began its current path to a more stable democracy.

Interrupting its latest rehabilitation was a catastrophic earthquake in 2010, which displaced hundreds of thousands of people into refugee camps, left half a million injured, more than a million unhoused, and a death toll as high as 230,000. Of $13.5 billion in aid that followed, much of it went to international contractors and possibly into the pockets of the elite. What’s clear is much of it did not make it to the people of Haiti and further devastation by Hurricane Matthew in 2016 only made matters worse. As a result, migration rose in the past five years as Haitians flee the poor state of their country.

Rebuilding over the ruins of trauma is a haunting issue at the root of Généus’ work. “Haitians are forced to carve out space for themselves in a place where they were humiliated, mistreated, and enslaved,” said the director. Like many nations, Haiti’s issues of stability and identity stem from the cracks in its foundation. Decades of disrepair and meddling by outside contractors made Haiti a home more vulnerable to threats of precariousness.

Haiti’s complex history with outside influence is the source of many of its issues. “Are you a conscious or unconscious agent of the colonist,” asks Freda’s teacher. The nation’s inception as a French colony created a linguistic, social flashpoint. In her class, a debate ignites over the use of Creole versus French. Haitian Creole borrows 90% of its vocabulary from French, but its grammar is West African with Spanish, Portuguese, and Taino (Native Caribbean) influences. French is considered the high language. Freda’s classmate argues its importance, along with English, to study anywhere else. It’s used in official, formal, and business capacities, popular among the elite and upper classes even though less than half the country is fluent. Creole is used informally and understood by nearly the entire population. But the native tongue of Haiti is regarded with low esteem as a miseducated person’s French.

The practice of Vodou is endemic to Haitian culture. It contrasts with the growing sect of evangelical Protestantism that believes Vodou to be a diabolical practice. Protestant churches provide medical clinics, schools, and other social services targeted at the country’s poor to get them to convert from Vodouism. Many evangelists blamed Vodouists for the 2010 earthquake, claiming it was retribution for their beliefs. Jeanette, once a practitioner of Vodou, is a devout protestant, rarely seen without a bible in hand. She expresses active antipathy toward Vodouists, as well as Esther’s Rastafari admirer D-Fi (Rolaphton Mercure). Yet Jeanette acts with great reverence to her church’s minister, who blatantly hits on Esther, her youngest child.

When Esther recounts her tryst with the minister to Freda, she mentions comparing his white skin to hers. Esther uses products to lighten her skin’s color, a practice supported by her mother and not uncommon. She is trying to erase her black skin. Her cousin Géraldine (Gaëlle Bien-Aimé) dates a light-skinned mulatto man and bleaches her hair blonde. The desire for white, European attributes is another example of the push to assimilate to outside influence. It’s a rejection of Haiti’s consequential founding as an independent Black republic. Some of the most powerful scenes in the film involve the characters assessing themselves in the mirror, searching for clarity within their murky views of the world.

The turmoil in Port-au-Prince boils over into the streets. Adding documentary verisimilitude to the narrative, Généus includes footage from actual protests. Failing infrastructure, economic instability, and corruption fuel acrimonious crowds that fill the streets with demands for reform. Protestors decry now assassinated President Jovenel Moise because of accusations of embezzlement in Petrocaribe, an oil alliance with Venezuela. Corruption is rampant and acutely hits Freda when she arrives at an empty classroom to find the teachers are on strike. She and her classmates accuse the administration of lining their own pockets.

Freda’s classroom is a venue to introduce opposing points of view held by the people of Haiti. “We’re not seeking politics; it’s seeking us,” declares one student. As mentioned, they argue over language and also how corrupt politicians should be punished. A student recommends austere, public discipline used during the dictatorships of François “Papa Doc” Duvalier and his son Jean-Claude “Baby Doc” Duvalier. The suggestion exposes the reason authoritarian regimes often flourish amid chaos. There are some that want a strong hand to bring law & order by any means necessary.

Freda fights against the erasure of Haitian culture. She’s indignant in the face of those who represent or try to push onto her, the gentrified version of Haiti. This is in contrast to Esther, who, though young, embraces and embodies the ills of society Freda opposes. With the backing of her mother, Esther wants to change her appearance so she can marry a rich man. Esther even engages in corruption of her own, stealing a wad of cash from the married older minister she sleeps with. “What’s another sin,” she asks Freda. After Esther leaves her artist boyfriend, D-Fi, for a rich Senator, he recites a piece about her: “When hunger extinguishes love, she understands ‘I love you’ doesn’t fill the belly.” The ensuing exchange between D-Fi and Esther is heartbreaking and poignant in its intimate specificity.

The film’s soul emanates from the warmth Généus, and her cast create. The window into the tempestuous Port-au-Prince is reminiscent of Steve McQueen’s from his format-agnostic, magnum opus Small Axe series. Both works depict hostile, encroaching white influences that attempt to subsume Black culture. They also affectionately display the marvelous beauty that is at risk. Lesser versions of these stories can be reduced to depicting the marginalized population as helpless victims and omit the strength and passion that exists in the heart of the community.

There are young people being young. Freda and Esther do their hair and put on make-up before going out to parties. Once there, Généus’ camera indulges in long takes that allow the audience to fully immerse themselves in the joy and cathartic experience of singing and dancing with friends. The parties are a temporary safe space from the cold and dangerous surroundings with spiritual ties to McQueen’s Lovers Rock.

Freda enjoys a number of sweet scenes with her boyfriend Yeshua (Juancito Jean). The time spent with the two creates a strong attachment to their relationship. The audience can feel the gut-wrenching predicament Freda finds herself in when Yeshua invites her to move to the Dominican Republic.

Though there is palpable hostility within the family, their interactions are largely endearing. They are there for each other when needed and celebrate each other’s successes regardless of approval.

With the exception of Moïse, the family is all female. Central to their conflicts, and a microcosm of another countrywide issue, is the consequences of a male-dominated society. Nearly all the female characters suffer abuse at the hands of men. The importance of strong women in Haitian society is summed up when Freda whispers to her unborn goddaughter that she is a goddess, a warrior and that she will not need a man to save her.

Freda’s complex feelings toward her mother, Jeanette, climax at the end of the film. She excoriates her mother for condoning her rape. When her mother goes missing, she has space to accept her mother’s imperfections. “I’ll mourn the mother I wanted you to be and finally embrace the mother you are,” she says. The final shot of Freda embracing Jeanette when she returns is unflinching and devastating. Jeanette is the broken caregiver whose arms are meant to provide safety and instead bring harm, just as Haiti is to its people. Tears stream down her now scarred face.

The contrast of tender moments alongside traumatic makes Freda absorbing and stirring. The Haitian backdrop is arresting and an integral element to the film. Généus establishes herself as an important voice for another under-represented community. Her next project will continue her exploration of the Haitian people and focus on their relationship to morality, religion, prostitution, and homosexuality. She appears determined to understand the intangible connections between Haiti and its people. As she explains, “how one might live in this country where so much evil was committed, how one might inhabit a body subjected to so much suffering.” Her commitment and eloquence add a needed perspective to help reconcile the societal trauma in Haiti and beyond.