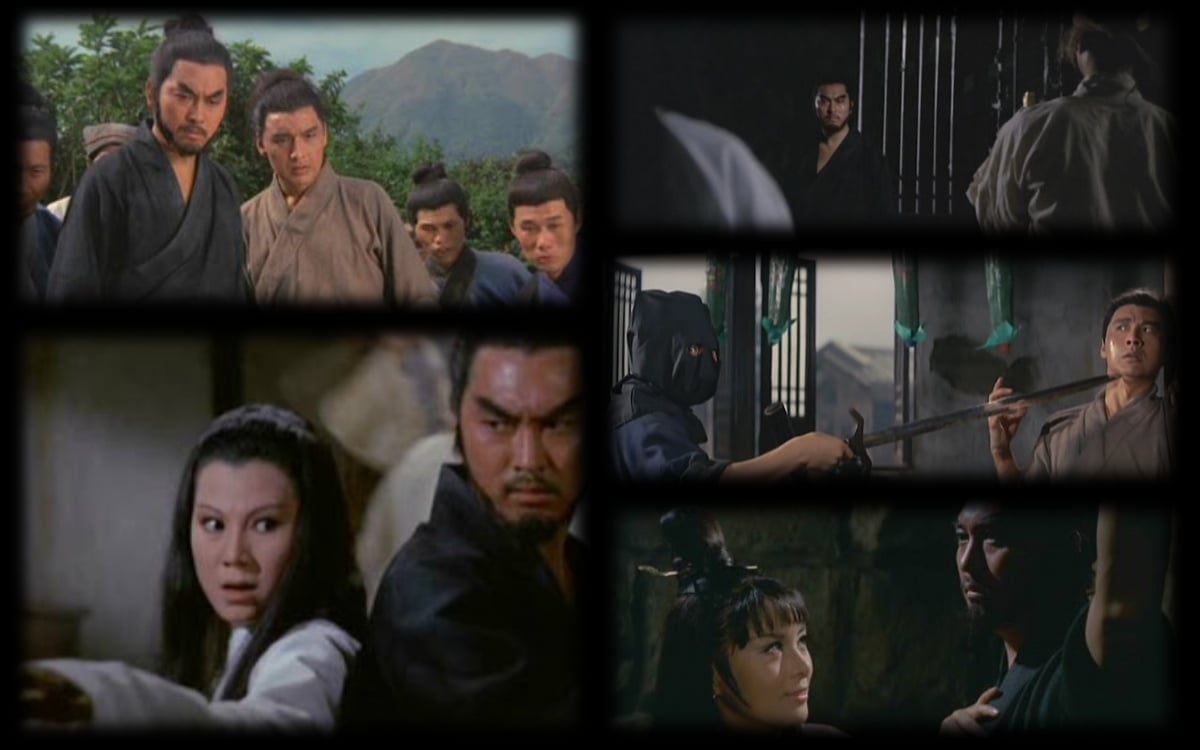 It should come as no surprise that family is as important a factor in character relationships and motivations in Shaw studio pictures. What better variables are there to stir passionate acts of benevolence, friendship or vengeance than love and family? In many films, the terms ‘brother’ and ‘sister’  are employed as signs of tremendous affection and respect between members of clans, schools or other such tightly knit communities, despite that the people borrowing them might not be siblings. Call it cultural specificity, call it an easy way to build drama, but for what it is worth, it helps screenwriters and directors get the ball rolling plot-wise more often than not. 1972’s Finger of Doom from director Pao Hsueh-Li expands on the idea of familial bonds with a few twists.

A quartet of young soldiers is lured by a corrupt socialite (Yeung Chi-Hing) into a dark and damp cave where they are promised a lucrative job opportunity under the service of a great martial arts leader. It turns out said leader is the renegade Finger of Doom disciple Kung Suen Mao Neong (Park Ji-Hyeon), a highly skilled practitioner of kung fu and black magic. The unsuspecting quartet is quickly subdued and, with the help of Kung Suen’s special dart-equipped metal claws, is transformed into ‘living dead’ slaves. When word of Kung Suen’s malfeasance reaches Finger of Doom clan headquarters, it sends out the villainess’ sister (Ivy Ling Po) to put an end to the traitor’s ways. Her mission is complicated further when two brothers (Ching Han and Chen Feng-Chung), skilled swordsman and umbrella makers (!) also begin a search for their missing sibling, whom they suspect may have suffered an ill fate at the hands of Kung Suen.

Finger of Doom is the sort of movie that does certain things so well that even though some other elements are not firing on all cylinders, the end result proves nevertheless a worthwhile watching experience. Is the film a perfect cinematic gem? No, not by a long shot, yet what it does well, it is mercilessly proficient at, therefore overcoming its warts.

Whatever faux pas the film commits are mostly relegated to the story, which, despite some clever concepts, lacks punch by making what seems like easily avoidable mistakes. A movie that springs to mind whilst viewing Finger of Doom is Brian De Palma’s Sisters, whose story centered on the effects an evil twin sister has on the kindhearted twin sister even after the former’s passing. Both Kung Suen and the protagonist (who remains unnamed throughout) are dressed similarly and sport similar hairstyles. It seems fair to assess that the filmmakers are attempting to construct a special metaphysical bond between these two sides of the same coin for the purpose of heightened dramatic effect. Where De Palma’s picture succeeds is in keeping the secret to the sibling rivalry hidden until the final third. When it is revealed that…well, something is amiss, it comes as surprise. Finger of Doom admits from the outset who the protagonist and antagonist are, eschewing potential surprises along the way. What makes the device stranger is that it features plenty of early scenes in which the two brothers are unsure as to whether they should put their trust in Ivy Ling Po’s character. Granted, the film does not make it explicit that the Finger of Doom clan is good or evil, thus leaving the door open to the possibility that maybe Ivy Ling Po is as bad as her sibling, although it fails to convincingly sell that idea.

Offsetting this problem to a degree is the interesting relationship between the brothers played by Ching Han and Chen Feng-Chung, the former of whom is content to earn a living at the umbrella shop whereas the latter craves a return to their more adventurous days. Another welcomed, if dour, twist on the idea of family matters pushing characters to extremes is the reality that the protagonist has no intention of saving her sister from the dark side. Instead of Ivy Ling Po feeling obligated to either cover up for her sister or refusing to kill her off in the hopes that she may renounce her vile ways, Ivy intends to find and kill Kung Suen without hesitation. Where sisterly love may have existed at some stage in the past, now exists only the desire to dispatch the other mercilessly.

Even for movie watchers who place story and character at the forefront of important ingredients in a film, director Pao Hsueh-Li and his team produce a wickedly atmospheric movie. The production design alone make the film worth seeking out, with plenty of fantastic scene transpiring outside in the fog, heroes surrounded by zombie-like creatures, fighting for their lives. Indoor sets embody an unmistakable creepiness fitting of a great 1970s horror film rather than a kung fu flick, which is partly what makes Finger of Doom so much fun. The filmmakers confidently build an atmosphere of terror and doom amidst an action movie. The lighting in several scenes is startlingly ominous, enough to have one wonder if there is anything lurking in the dark corners behind the heroes, waiting to strike hen they least expect it. Pao utilizes some excellent camera pans to emphasize facial reactions by having shots begin from behind people’s heads and glide the front, musical cues striking at just the right moment. The direction is quite showy, but in the best way possible.

Finger of Doom is also the first film reviewed in a while that offers some truly visceral, brilliantly choreographed fight scenes. Confrontation are mostly limited to sword fights rather than hand-to-hand combat, each happening at a quicker, more furious pace than the previous one. After watching so many of these movies, one’s ability to discern whether or not the actors, stunt doubles and directors had a firm grip on the action or not improves. Slow, simple strikes probably denote inexperience. Slow and simple are nowhere to be found in Pao’s film. The swipes, swooshes, sword throws, crouches and jumps are performed at an alarming rate. Even the cinematography of said fights helps conjure the sense of danger, the close quarters, faux-documentary-style reminiscent of Paul Greengrass’ technique.

The movie unquestionably executes some elements better than others. The positives far outweigh the negatives however, to the extent that said cons are quite easily forgiven. Finger of Doom is a mostly clever, well-intentioned mish mash of action and horror.

The United States vs. Billie Holiday: A Great Performance in Search of a Movie