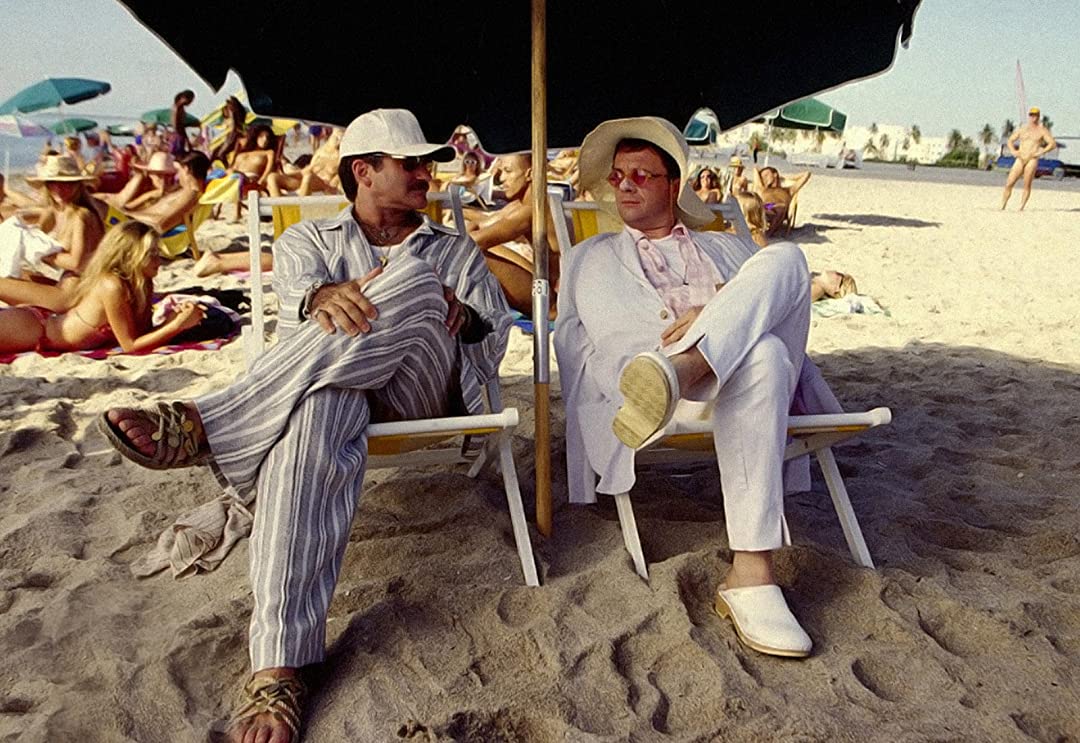 The parents. Dinner. And a nightclub called The Birdcage…

When Mike Nichols’s The Birdcage was released in 1996, it made $185 million worldwide, a truly astonishing fact. There are so many reasons why The Birdcage would never ever be made today, let alone make so much money. We’re talking about an R-rated comedy with no gross-out or potty humor.  It isn’t a buddy comedy or an action comedy or even a particularly romantic comedy. Its four main characters are quite a bit over the age of 40. Dianne Wiest has an above-the-title credit, for God’s sakes.

Of course The Birdcage is a gay movie. Its leading couple is gay, the plot hinges on a gay secret, and there’s lots of drag and swishing and short shorts.  There’s no actual sex, or even too many sexual allusions, but much of the dialogue feels gay – its rhythms and references are gay. Elaine May, one of the funniest writers alive, gets so much right about how these gay men speak to each other. In its best moments, The Birdcage recalls nothing more than All About Eve, in which every insult is returned with another one more barbed and witty than the last. There are references to Martha Graham, Bob Fosse, and a 3-second visual gag based on a specific Judy Garland number from Easter Parade. There is so much remarkable material in this movie that it makes the parts that are not so remarkable (the plot, a few key performances) that much more disappointing.

The Birdcage is based on La Cage Aux Folles, a 1978 French farce that was also unexpectedly popular in America, and I find vastly inferior to the American remake. (It might be a language thing – for all I know, the screenwriter of La Cage is the French Elaine May and I just don’t get the jokes.) The plot is completely ridiculous in the way that is endemic to French farces, but can be tonally jarring to an American audience used to realism. For those who haven’t seen either film or the popular Broadway musical based on La Cage, The Birdcage concerns a young man (Dan Futterman) who wants to marry the daughter (Calista Flockhart) of a conservative politician. The problem is that Val’s parents Armand and Albert (Robin Williams and Nathan Lane) are a gay couple who own a Miami drag club, and so they all try to hide this fact in various ways – the climax of which is his “mother” Albert dressing in drag and trying to convince the potential in-laws (Gene Hackman and Dianne Wiest) that he is a biological woman. It’s super crazy, super weird, potentially offensive, and yet almost 25 years later, The Birdcage holds up pretty well.

Let’s start with what works. First of all, Robin Williams is fantastic – a sentence my fingers can’t believe they are typing, but it’s true. He gives a warm, subdued, grounded performance in an over-the-top and sometimes completely nonsensical film. Next, Hackman and Wiest are both brilliant and clearly having fun playing a religious conservative bigoted couple the movie (and assumedly its creators) have so much contempt for. I’ve already mentioned Elaine May’s screenplay, which is chock full of great jokes and one-liners. And of course Mike Nichols knows better than anyone how a comedy should be paced, and the movie flies by with very few extraneous scenes or dull moments.

Now, the things that don’t work so well. The most problematic aspect of the whole movie is Dan Futterman’s Val, Armand and Albert’s son. He’s written as a selfish asshole who doesn’t stop to think of how his actions hurt his parents’ feelings, and he’s never really taken to task for it. Armand gives his son a few cold looks during the shenanigans, but the basic premise of hiding his parents’ identities to gain the approval of some pretty awful people is never really called into question. Futterman’s performance doesn’t help matters. He has a pretty small part, but every time he’s onscreen the energy drains. He might be a perfectly lovely man in real life, but his presence is so off-putting and cold that the viewer might wonder why Armand and Albert even put up with him in the first place.

Then there’s Nathan Lane’s performance as Albert, the drag queen who can’t pass for straight and must therefore pass as a woman. It’s both a star-making role and a thankless one, the gay equivalent of what Robert Downey Jr.’s character in Tropic Thunder refers to as “going full retard.” Lane is a truly gifted actor, and this was his first major screen role, but he seems to always make the expected physical and vocal choices with Albert. Every shriek, every raised pinky, every hysterical tantrum is performed exactly like a person who’s never met a gay man would expect it to be played. Maybe he was directed to be as exaggerated as possible, and his character is a bit pathetic as written, but Lane does little to deepen his role.

Hank Azaria as Agador, Armand and Albert’s Guatemalan houseboy, also deserves a mention here. Azaria is clearly having a blast, and Agador gets some of the movie’s best lines, but there’s more than a whiff of Mickey Rooney as Mr. Yunioshi. It’s very odd that a non-Hispanic actor was cast in the role, and I wouldn’t begrudge anyone by being a little offended by the performance.

The most surprising aspect of revisiting The Birdcage after all these years is how overtly political it is. Hollywood has a great history of injecting contemporary politics in its comedies, in everything from Sullivan’s Travels to Dr. Strangelove, but now seems to offer little more than the vague allegories of superhero movies and The Hunger Games. The Republican characters in The Birdcage are loathsome and hypocritical and the movie makes that very clear, if somewhat ham-handedly. Based on its box office, thousands of Republicans must have gone to see this movie – what must they have thought of this portrayal? One brilliant moment Lane has amongst all the mincing and screaming is this delicious speech trying to prove his conservative bonafides to Hackman and Weist. “Mrs. Coleman” starts talking about being pro-life and, after rambling for a while, ends up calling for the death of any woman who has an abortion. It’s hilarious and scary all at once, because one can see how ridiculous this stance is but also its ultimate logic. It might be the funniest abortion joke in movie history.

Though the film never mentions it, and it wasn’t even much of a concept in 1996, The Birdcage is a statement in favor of gay marriage. If Albert and Armand aren’t a family, who is? The fact that they go to these great lengths to hide their relationship makes it essential for America to confront the fact that gay couples do have relationships (often long-term monogamous relationships) just like straight couples, but don’t have the language for it. It’s telling that Armand never calls Albert his partner or boyfriend or husband, but his wife – as if the only way the (presumably straight) audience is able to understand gay couples is through the heterosexual lens of husband and wife, man and woman. Albert and Armand seem comfortable with that vocabulary, but they’re from the last generation who will be.

But baby steps, right? The Birdcage has many problems, but the whole thing is so joyous and good-natured it’s hard to dislike. It doesn’t take itself too seriously, and doesn’t ask its viewers to respond with anything other than laughter. But by making that $185 million and exposing a mainstream audience to a loving gay couple, it expanded the definition of what a family can be to many, many people.