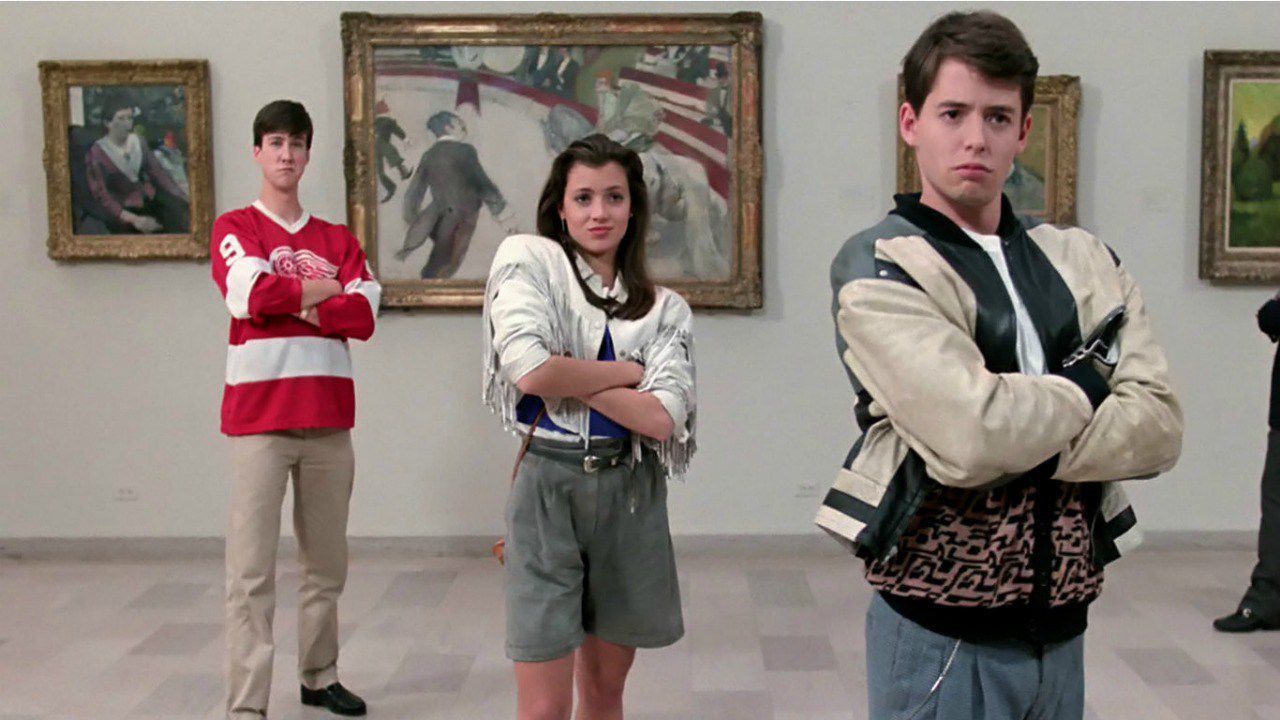 “Life moves pretty fast; if you don’t stop and look around once and awhile, you could miss it.”

Ferris Bueller’s Day Off is heartfelt and funny with teenage characters grounded in authenticity, and unlike many comedies from the 80s, it still holds up today.

That is no easy feat. The life of young people in America has changed drastically since 1986 when Ferris Bueller’s Day Off first graced cinema screens. It’s often no surprise to look back at older movies and find cringey stereotypes, offensive language, and multicultural insensitivities.

This long-standing success is in large part due to the film’s writer and director, visionary John Hughes. Hughes had a deep respect for young people and saw teenagers as whole human beings. That consideration and care is evident in the characters and stories he created.

*looks at the camera like he’s on The Office*

Well before this fourth-wall-breaking device became popular on TV shows like The Office and Modern Family, Ferris was communicating directly with the audience. The viewer instantly feels like a friend to the very hip Ferris Bueller. And getting to go along for the ride that is his adventurous day off is made all the more special than if it was done with a conventional narrative style.

It also allows the audience to get to know their charming tour guide on a more personal level. He brings viewers behind the curtain to see just how he is able to pull this epic enterprise of truancy off so skillfully. Ferris is the epitome of cool—Mr. Popularity but not in the typical school jock kind of way.

And the audience is granted unique access to play hooky with this much revered bad ass.

Hughes wrote Ferris Bueller’s Day Off as a love letter to his hometown. “Chicago is what I am,” the late, great auteur once said. One can clearly see this love in the film through the oft-real locations as well as the spirit of the people and the city’s culture.

Some of these recognizable locations include Wrigley Field, the Art Institute of Chicago, and the downtown parade route. Originally, the parade came before the museum scene, and test audiences did not respond to it as Hughes had hoped. He admittedly included the Art Institute sequence for personal reasons, calling the locale his “place of refuge.”

Rather than cut the sentimental scene, editor Paul Hirsch rearranged the two sequences and Hughes replaced the music with The Dream Academy’s instrumental cover of The Smiths’ “Please, Please, Please Let Me Get What I Want.” It would be hard to top Ferris’ parade float performance, so the scene swap ended up being crucial for the overall flow of the film. And as a result, the parade is the eventful capper to their day in the city and the museum scene is as intended: a serene haven away from school and parents and principals.

Without a doubt, the parade sequence is the most memorable of the film. Portions were filmed during an actual annual Von Steuben Day Parade and many shots of the crowd are real people reacting to the spectacle, including construction workers up on scaffolding dancing along. Some pickups were shot the following day after the producers put out a call for extras on a local radio station and roughly 10,000 people showed up. The high-energy and excitement seen in the movie is as spontaneous as Ferris’ hijacking of the float, and subsequently, give the scene a genuine feel.

The film has stood the test of time and is considered a national treasure—literally. In 2014, the Library of Congress selected Ferris Bueller’s Day Off for preservation in the National Film Registry, deeming it “culturally, historically, or aesthetically significant.”

Alan Ruck, who plays Ferris’ best bud Cameron, has credited Hughes for jumpstarting his career. Ruck told Entertainment Weekly, “[Hughes] gave me the best part I ever had in a movie, and any success that I’ve had since 1985 is because he took a big chance on me. I’ll be forever grateful.”

Ferris Bueller has had a significant cultural impact that is evident today. TV shows like The Goldbergs and Limitless have had episodes that paid tribute to the movie. Emma Stone’s character in Easy A does an homage to Ferris in the shower with her hair styled in a soapy mohawk. The two bands Save Ferris, and Rooney were named in reference to the iconic film. There are countless quotes that are still used like Ben Stein’s droning, “Bueller? Bueller?”

Matthew Broderick’s brilliant portrayal of this iconic character has stayed with him ever since. A tribute at the 2010 Academy Awards ceremony honored the director, and Broderick had this to say: “For the past 25 years, nearly every day someone comes up to me, taps me on the shoulder and says, ‘Hey, Ferris, is this your day off?’”

After 35 years, Ferris Bueller’s Day Off is just as popular as its titular character. Hughes’ deference for the American teenager lives on in his films, bringing sincere stories that resonate to life. Ferris Bueller continues to charm audiences, old and young alike, whether it’s through nostalgia, relatable characters, or Hughes’ particular comedic tone and aesthetic.

Follow Ferris’ lead—take a day off and revisit this timeless classic.