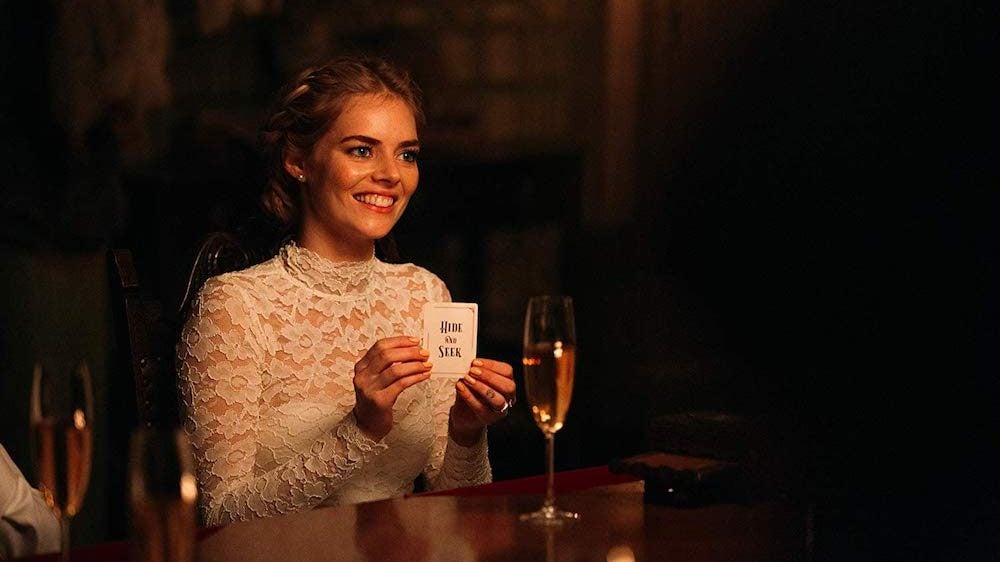 Making its World Premiere at the Montreal genre festival, Ready or Not is a blood-spattered, tongue-in-cheek horror comedy that features plenty of gore and a sense of humour as dark as the terror on display.

Anyone who has seen the trailer is already familiar with the simple premise. What is best described as a cross between The Most Dangerous Game and Clue, Ready or Not stars Samara Weaving as Grace, a young bride who marries into the wealthy but strange Le Domas family that made their fortune in the board game industry. When it comes time to consummate the union, the bride is told that the marriage won’t be complete until she participates in an unusual family ritual: before the strike of midnight, the newlywed bride must draw a card from a mysterious box which will dictate which game they play into the night. Grace pulls the one-and-only cursed card that reads “Hide and Seek.” But this isn’t the traditional children’s game we are familiar with; in this deadly version, she is hunted by her soon-to-be-revealed psychotic in-laws wielding heavy weaponry like crossbows and shotguns.

A surreal cat-and-mouse chase ensues, with Alex ostensibly trying to help his bride survive while the rest of the La Domas clan remains dead-set on sacrificing her through the mysterious ritual. Their motive is simple: the La Domas believe that they must kill her before dawn as part of a satanic pact agreed upon years ago, otherwise they will have to repay their debt with their own lives. As to whether or not there actually is a satanic pact is unknown; as far as Grace is concerned, these rich folks are batshit crazy and out of their goddamned minds.

Directed by Matt Bettinelli-Olpin and Tyler Gillett, who are collectively credited as Radio Silence (V/H/S, Southbound), Ready or Not has a lot to offer in wit, style, and entertainment. It feels tailor-made for a midnight audience, as the bloodthirsty relatives arm themselves to the teeth in a wedding night filled with crossbows, shotguns, decapitations, a car chase, and a level of gore I didn’t expect given the marketing. The climax is especially memorable — an all-out gore extravaganza that left the audience laughing hysterically.

There’s a lot to like here, from the score by composer Brian Tyler to the cinematography by Brett Jutkiewicz, but the reason this film works so well is because of the talented cast they’ve assembled, most notably Alex’s alcoholic brother, Daniel (Adam Brody), who serves as the family’s moral core. And of course, there’s also Samara Weaving, (Mayhem, The Babysitter) who pretty much sacrifices her body in blood-soaked scenes of action and terror. The actress is fully dedicated in her role, turning into her own version of Ripley while tearing apart the upper-class society, their ridiculous traditions, and their silly superstitions.

I don’t want to oversell Ready or Not; it’s a great B-movie (albeit a big studio B-Movie, but a B-movie nonetheless). The quick pace, simple concept, and terrific performances are what carry it through the 95-minute run time. Ready or Not is simply put, a lot of fun — a horror-comedy that offers a ton of laughs, delivers the action, and cements the star power of Samara Weaving. The best compliment I can give is that I’m ready to see it again. It’s the perfect movie to watch with a group of friends on a stormy night, and a late-summer surprise for genre fans everywhere.

Beanie Babies: The Collectables with Heart