It’s easy to imagine the pitch for Escape Room, a preposterous piece of puzzle-box horror that takes the ambitious ingredients of better films and tries to concoct its own terrifying cocktail: blend the deadly contraptions of Saw with a series of deathtrap chambers à la Cube, add a drop of pop psychology from The Game, then sprinkle a bit of Hostel‘s cold-blooded paranoia on top. Attach the name of a popular social activity of the moment, et voila — you’ve got Game Night for the homicidal crowd! Well, either that or you end up with the kind of murky sludge that results from mixing every flavor from a soda fountain. It’s a delicate recipe.

The ‘plot’ involves a group of seemingly unconnected people all receiving a mysterious invitation to participate in a special escape room — the first to make it out will receive $10,000. These suckers hail from all walks of life, from a high-powered stock trader to a lowly grocery clerk, with a painfully shy college student, a stereotypical game nerd, a traumatized military vet, and (possibly the oddest) a former coal miner rounding things out. For some reason, none of these caricatures are suspicious of this premise at all, and they each find the time to show during normal working hours– no, don’t think too hard. Backgrounds, motivations, laws of physics aren’t required here — Escape Room isn’t interested in giving it’s audience any puzzles to actually solve on their own. 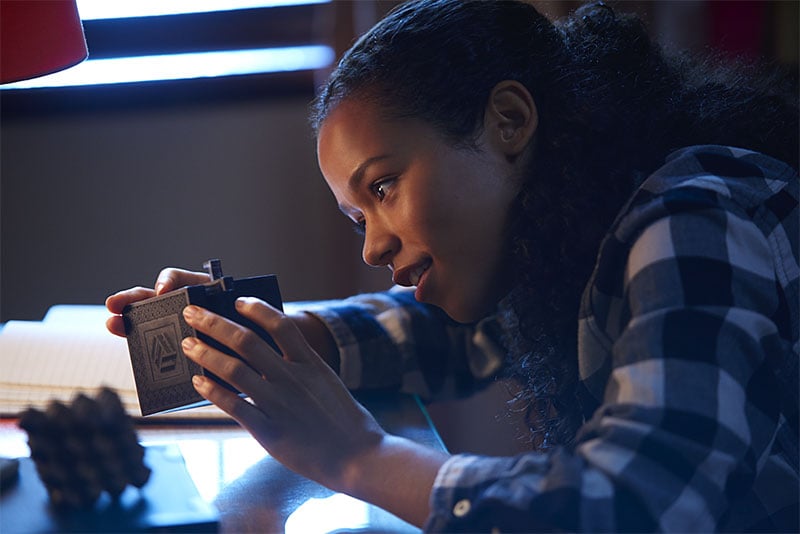 Anyway, this motley crew eventually find themselves in a series of elaborate setups that require discovering and deciphering clues in order to proceed from one area to the next before some convoluted trap is sprung. Any numbers, letters, colors, or billiard balls out of place could provide the hint they need to find keys or lock combinations needed to progress, and all the while the clock is ticking. As they soon find out, the dangers in each room are all too real, and they are actually playing for their lives.

While not original, this scenario has the potential to offer some clever thrills, and to that end, the puzzle rooms are lavishly designed — though perhaps too much so. When the audience is supposed to believe that an outdoor winter wonderland has been exactingly created inside a medium-sized high rise, complete with a mountain backdrop and a deep, ice-covered pond, well, even a fun-loving mind might start pondering credibility. Still, the variety of settings does allow the visuals to stay relatively fresh — an upside-down bar room and a trippy lounge are standouts — and the attention to detail, however absurd in context, will have viewers searching the corners of the frame for any hints. 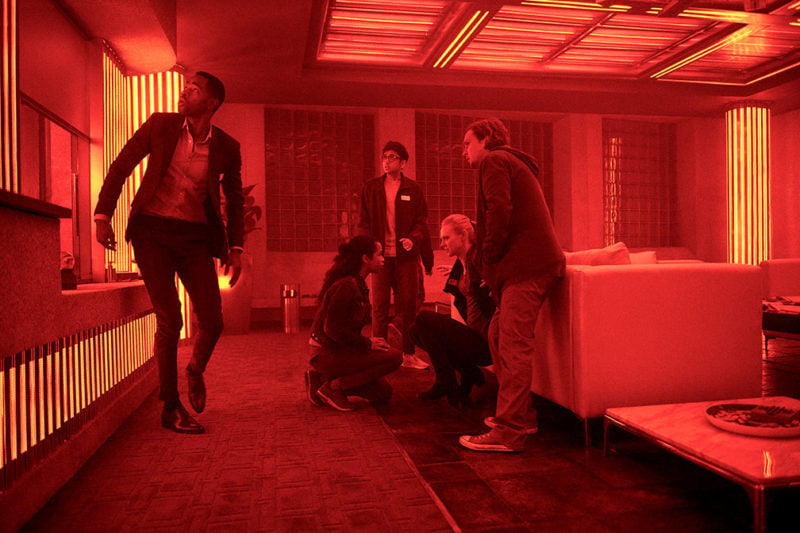 Unfortunately, Escape Room isn’t the kind of thriller that is interested in engaging that kind of audience participation. Clues are kept out of our reach until a character can discover and explain them to us first, and even then the connections that must be made in order to divine solutions are so contrived as to be opaque, often requiring leaps of logic and levels of awareness that would make the Mentalist jealous. No, this is a ‘just sit back and watch’ mystery, one that force-feeds its artificial cunning instead of letting viewers participate; it’s a puzzle box that essentially opens itself (perhaps mockingly foreshadowed early on?).

That’s not much fun, but movies like Escape Room can still entertain with devilish creativity in the deaths. After all, such complex machinations from surely years of planning must be designed for particularly gruesome or poetic ends for a group that’s mostly unlikable anyway. Sadly, however, these rooms are like a metaphor for hackneyed puzzle-box plotting itself: lots of ideas going into the setup, few left over for the payoff. Character demises play out surprisingly mundane, with no gleeful splatter or flailing limbs as recompense for the snarky dialogue (reveling in goofy deaths of obnoxious idiots is usually one of the pleasures of this genre). Also, the ending in particular invites questions of whether the ultimate motivation is betrayed by laziness that undermines it, as what we’re told suddenly doesn’t fully jive with how things actually happened. This horror cocktail has been watered-down. 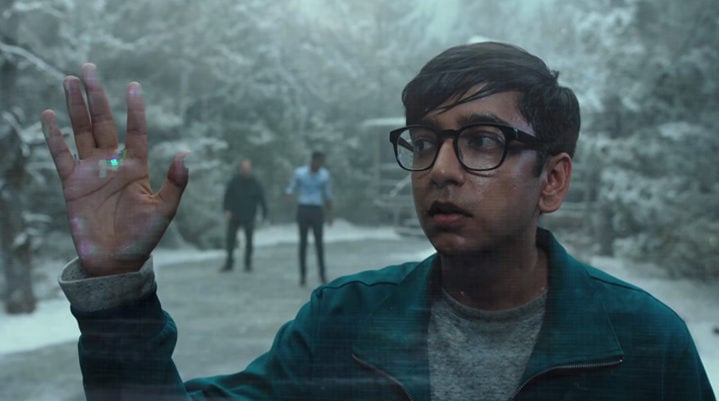 Of course, that tepidity means it’s palatable, but only barely. Yes, audiences don’t imbibe a movie like Escape Room expecting sophistication, but a little fizzy entertainment would be nice — preferably without having to hold your nose when downing it. The lack of ambition and regard for intelligence in this lukewarm blend, however, leaves Escape Room tasting disappointingly bitter, and decidedly flat.

‘Pledge’ Earns a Bid With its Fraternity House of Horror