A group of college nerds wants access to booze and babes, so what do they do? Make a run at the most popular fraternities on campus, of course, delusional in thinking that their awkward demeanor and lumpy bodies might possibly be overlooked among the socially and physically elite. Things don’t go so well, and the boys soon find out that something dark and sinister is afoot (besides just douchebaggery, that is). It would be easy to peg a movie about homicidal frat boys as simply taking aim at an alpha-oriented Greek system, but Pledge is so much more interesting than that. The resulting horror is skillfully crafted and effectively lingering; it speaks more about us than them, about how the pursuit of power is an impulse that can destroy everyone, even those bearing the mask of decency.

Pledge wastes no time setting up its simple premise: David, Ethan, and Justin have set a goal for their lives that doesn’t involve staying home every weekend and playing video games, and so they subject themselves to the university rush process. Meeting dorky failure at every turn (sometimes humiliatingly so), they are about to give up their dreams of a sexy social life — until an invitation to a party at an exclusive club from a hot coed has them salivating at the possibilities. Suspicious? Absolutely. Nevertheless, though it’s clearly a trap, they willingly walk into it anyway — lambs to the slaughter, tricked into thinking that they can somehow become wolves.

Naturally, the genuine interest in these three schmucks by the preppy heads of the house isn’t for quite the same reasons that the guys have convinced themselves of. After a night of bacchanalian festivities, they are invited to pledge along with two other sad sacks, and the ritual begins.

Pledge has a nice little twist in the end but the plotting isn’t the draw here.

Like many would expect, Pledge does offer up a version of hazing that is both sadistic and unfortunately believable, but that’s low-hanging fruit (though nicely done). It’s easy to go after the guys with smart suits, chiseled jawlines, and movie star hair — the guys with all the natural power, for whom everything seems to come so easy. It’s also easy to make the geeks into the good guys, the antithesis of macho aggression — sensitive men for a sensitive time. Luckily, a smart script by Zack Weiner (who also plays David) doesn’t just opt for cliches. Sure, the frat boys are primal monsters (an opening sequence never leaves that to doubt), treating the world — and the people in it — as their personal playground. But what actually separates them from these three nerds, outside physical gifts that have matured their killer instinct?

Not much, it turns out. Warm light and earthy tones create a rich, inviting atmosphere for a house in which shallowness and materialism pervade, drawing the protagonists in for the same reasons as their enemies: this place emanates power, which they so desperately crave. What kind of power? The kind that offers influence over others, allows for control. The kind that creates opportunities for fortunes, bestows importance. In short, it’s the kind of power that grants a person whatever earthly pleasures they may desire. 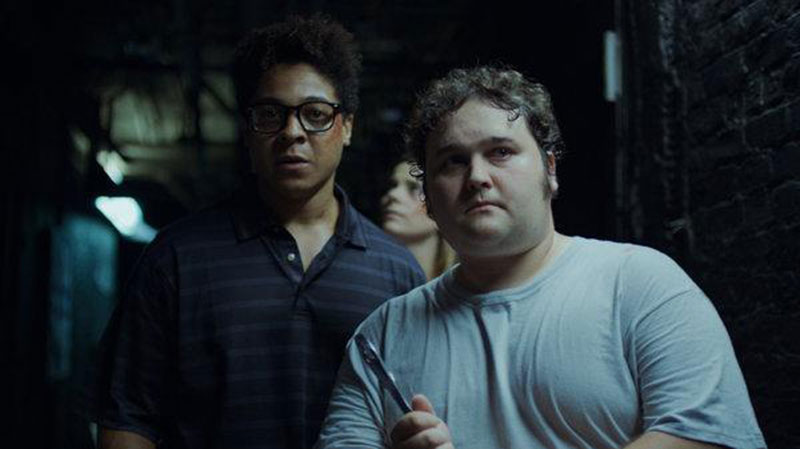 David, Ethan, and Justin have just such desires, and the guys clearly see the fraternity as a way to pursue their shallow wants — an association to give them what they can’t earn themselves. For that opportunity at primal cravings, they’ll cast aside whatever weakly held principles they once had for a shot glass or pretty face, as well as make excuses for enduring cruel acts if it gains them acceptance. Like their hazers, they too are base, instinctual, consciously ignorant of warning sign after warning sign, because on some level, they envy the jocks — a bunch of wannabe douchebags in geek’s clothing (with one possible exception). That same tendency toward objectification that the villains have taken to a deadly level is on display in the pledges right from the start; when they talk about wanting to “date” a girl in a short skirt, it’s pretty obvious that romance isn’t what they’re after.

What this does is make for a situation where — though clearly preferable to the diabolical alternatives — the three people audiences would be normally rooting for aren’t comfortably likable. They’re not bloodthirsty psychopaths devoid of morality, but most of the group seems pretty flexible when it suits their needs, and the eagerness (and snarkiness) with which they pursue this kind of life makes it hard to think them blameless for stumbling into this predicament. That grayish quality is part of what makes things so intriguing. 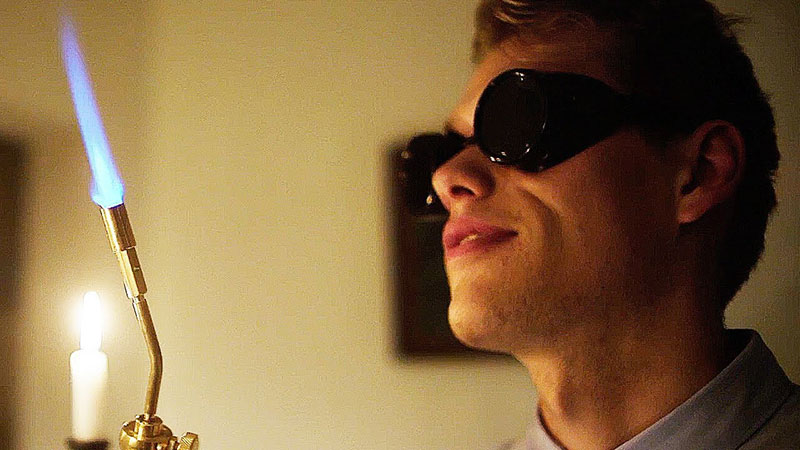 Pledge presents a fascinating scenario, made extremely entertaining due to some excellent genre filmmaking and top-notch production value. Director Daniel Robbins floats his camera through long hallways, letting it linger on excesses of both pleasure and pain alike, maintaining tension-filled scenes of torture by exhibiting the kind of patience more horror filmmakers could learn from. The actors also shoulder the burden of a lack of background info with surprising skill, delivering performances that convey subtleties and depth in nearly every character, and speaking the sharp dialogue with deliveries so natural that even some of the crazier moments come off as utterly believable. There are a couple of plot holes involving the women associated with this house that could have been filled, but little nits don’t spoil what is otherwise very absorbing.

Pledge has a nice little twist in the end that many will pick up on early, but plotting isn’t the draw here. What could have been merely an amusing gore-fest instead persists in the memory, provoking thoughts on the lengths to which we will go and the people we might step on in order to get the things and life that we want. This doesn’t apply to just deranged alpha males; given the opportunity, we all can be lured in by the temptation of power — and we can all be destroyed by it.

‘Signs’ Finds Comfort in the End of the World

‘Escape Room’ is a Weak Solution to Puzzle Horror