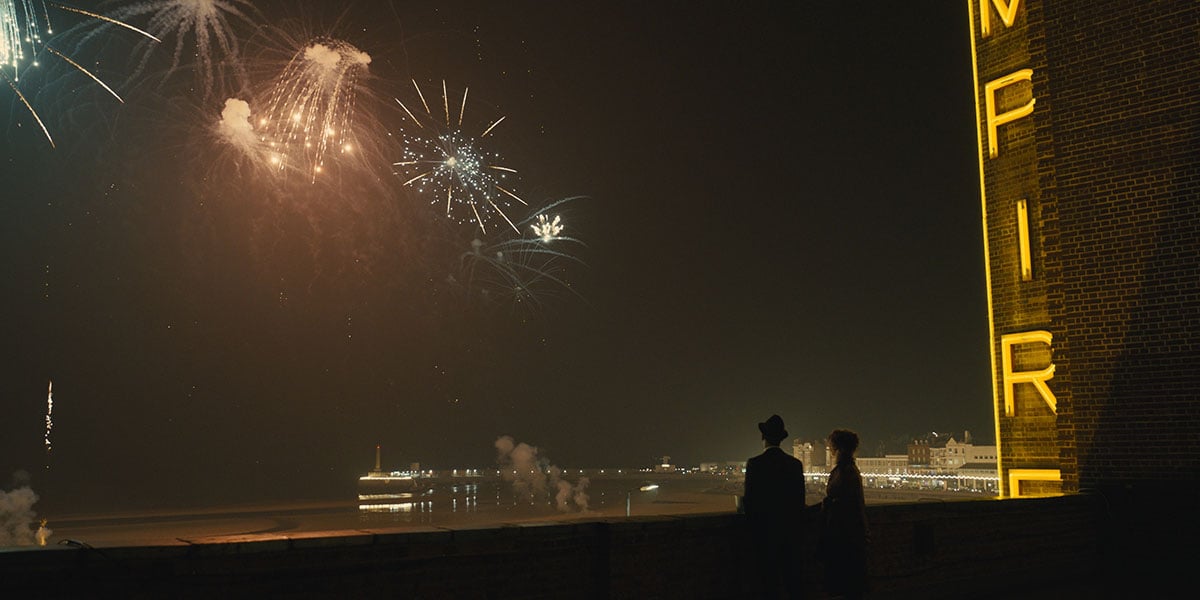 It sounds great on paper: A drama by a successful director (Sam Mendes), who wrote the script himself and set it in a classic movie palace on the coast of England, circa 1981. The theater looks as good on screen as it possibly can, especially since Roger Deakins is shooting it, and stars a lead actress (Olivia Colman) who is in the thick of awards season every year.

That movie is Empire of Light, Mendes’ latest and yes, I can certainly say that the movie theater in it is beautiful. But while the movie itself has its charms, including another tour de force turn from Colman, the film feels a lot like its director combined about a half-dozen disconnected ideas that were all important to him in his youth.

The film is about the theater in it, the love of movies, as well as a woman (based, Mendes said at a TIFF Q&A, on his own mother) battling mental illness. There’s also a May-December interracial love affair, the rise of neo-Nazi skinheads in the early Thatcher era, and what it must have been to go to the local premiere of Chariots of Fire back in 1981.

The theater and the town surrounding it are well-put-together by the production and beautifully lensed by Deakins, with the film’s look not requiring that stupid fake one-shot gimmick from 1917, their last collaboration. And just as 1917 failed to win the Best Picture Oscar, I suspect this will as well.

Olivia Colman stars as Hilary, a middle-aged woman who has worked for several years at a movie palace on the water. She’s having an affair with her boss (Colin Firth, cast somewhat against type as a huge piece of shit), and appears to have suffered some type of mental health episode a year before the events of the film.

Soon, she meets a young, Black student named Stephen (Michael Ward), with whom she begins a flirtation and eventually a romance. But some trouble is afoot, including from local skinheads, and her mental illness threatens to surface again.

There’s a lot of good stuff here, including fascinating performances from both leads, gorgeous Deakins cinematography, and a first-rate score from Trent Reznor and Atticus Ross. Toby Jones also turns in a small but powerful supporting performance as a theater projectionist with buried regrets.

Despite all that, the movie’s big ideas don’t quite fit right together. And there’s one thing that really sinks it: While this is supposed to be a tribute to movies, these don’t feel especially like movie people. For movie theater employees, especially those of them who have worked at the same theater for years, these people talk surprisingly little about specific movies.

And while the film’s treatment of mental health is empathetic and not just pretend-empathetic, like fellow TIFF film The Whale– these characters seem quite a bit more understanding about mental illness than I expect people in early 1980s England would have been. Also, Colman’s big breakdown scene is positioned for laughs, when it probably shouldn’t be.

And finally, arriving in the same festival and awards season as Steven Spielberg’s The Fabelmans doesn’t do Empire of Light any favors, between the “love letter to movies” thing and the film delving into the mental illness of the director’s mother. The Spielberg movie both dealt with those things in a better way, and integrated them with each other as well.

Moonage Daydream is an Ambitious but Flawed Tribute to David Bowie