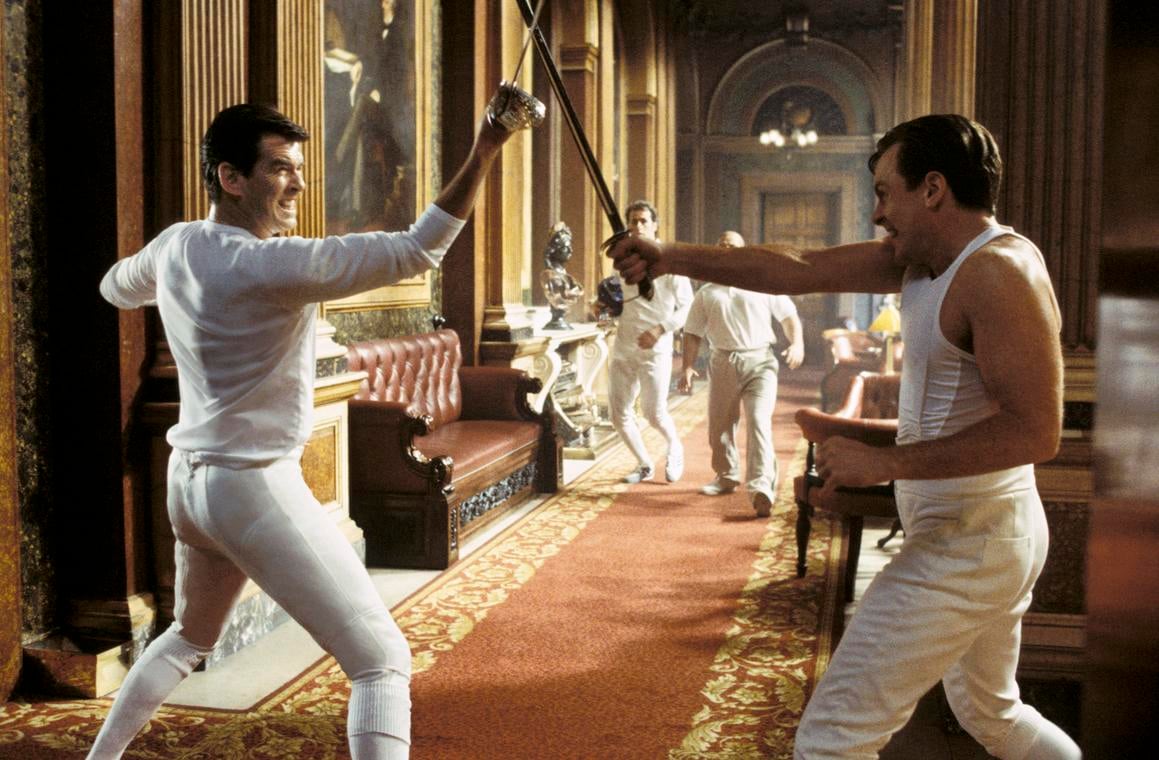 It was the twentieth official installment of the cinematic James Bond. It was released in 2002, 40 years after Dr. No. It wasn’t just the turn of a decade or even a century, it was a new millennium. 007’s adventures would barrel into the 2000s, a testament to the franchise’s enduring allure. Die Another Day was not just another Bond movie and that’s the source of so many of its woes.

Die Another Day is not a good movie. Let’s just get that out of the way. You won’t get any secret masterpiece argument here, so if that’s what you’re looking for move along. Producing this milestone film is an unenviable task of immense responsibility. Unfortunately, the result is a clumsy homage –an attempt to concoct a grand confection with ingredients of varied quality and a baker that wasn’t up to the task for a project of that scale.

The film is a ramshackle mess of intention: attempting fan service that “honors” Bond’s history while creating an entertaining, up-to-date action-adventure. You can feel the erratic consequences of those halves colliding with each other throughout the film’s 133 minutes.

The film’s lengthy cold open concludes with Bond’s capture by North Korean forces. We’ve seen 007 locked up by his foes before but not to the degree where he is tortured and imprisoned for 14 months, long enough for his hair and beard to grow out. It’s a new and exciting start to a Bond movie that gives us a delightful scene of the soaked and disheveled secret agent not missing a step of his swagger while he struts through a hotel lobby.

The bits of the film that do work are unfortunately marred by a ham-fisted script that relentlessly attempts a Roger Moore degree of wordplay. There is no pun or sexual innuendo too shameful for screenwriters Neal Purvis and Robert Wade. Even as an ode to the arch manner of Bonds-passed, there seemed to be little discrimination in which lines would be cut.

It was an unfair assignment for Pierce Brosnan, returning for his fourth appearance as Bond, and Halle Berry, who plays NSA agent Jinx. Both more than-capable performers were hamstrung from the start thanks to the tawdry dialogue.

Being born in the Regan administration, there is no getting around the fact that Pierce Brosnan is my Bond. Is he my favorite? No. But he was the actor playing James Bond when I was a young person discovering this world of MI6 espionage. I feel I am forever, ahem, Bonded to him. But even in his fourth turn as 007, comfortable with the role as he was, there was a little spark in his performance. I still cringe thinking of the way he says “mojito” in this film. My darling Brosnan, looking great but showing his age, had a difficult time selling the action with which he was tasked.

The idea of Berry as a Bond girl is a no-brainer. She was coming off an Oscar win for her performance in Monster’s Ball and nails the “Honey Rider emerging from the ocean” scene. But the absolute trash she’s meant to sell in her interactions with Bond is a near-impossible task. When Jinx and Bond first meet, Bond introduces himself as an ornithologist (a nod to the origin of the name ‘James Bond’). Their dreadful repartee ends with this exchange: “Nothing to see until the morning. Not out there anyway. / So, what do predators do when the sun goes down? / They feast. Like there’s no tomorrow.”

The secondary leads, Toby Stephens as the villain Gustav Graves, and Rosamund Pike as a triple-agent perform their respective duties more adeptly. Gustav Graves is another throwback to the Moore era as a villain who has a space-based weapon with which he will attempt world domination. Stephen sneers and grins his way through a mostly winning performance given the difficult task of being both an over-the-top, monologue-spouting Bond villain but also someone who is formerly Asian.

Pike, in her film debut, is a rare delight in the movie as the icy femme fatale. She more than holds her own with Brosnan and is thrilling in her action sequences. Granted the cold demeanor may do some work in delivering an understated performance, she’s pitch-perfect in her duplicitous turns.

It’s necessary to celebrate how good Rick Yeun looks as Zao. An inspired casting choice, the disfigured henchman with a face full of diamonds is one of the film’s memorable images. The elegant affliction sets up one of the better tongue-in-cheek lines when referred to as “expensive acne.”

I’ve waited this long to discuss who may be most at fault for this mess, director Lee Tamahori. Producers Barbara Broccoli and Michael G. Wilson, stewards of the Bond franchise, chose Tamahori largely in part to his 1994 film Once Were Warriors. However, his shoot-from-the-hip, improvisational directing style that worked on smaller productions appears to be incongruous with an enormous production like this.

The most obvious examples are the outrageous set pieces such as Bond extemporaneously kite surfing to safety from a tsunami caused by a space laser. Tamahori’s inability to reconcile his ambitious ideas with the special effects available to him makes for action sequences sapped of any tension when they should be some of the most rewarding and memorable moments.

To give credit where it’s due, we don’t often get a swashbuckling Bond. The fight sequence between he and Graves has sweeping camerawork and a good amount of Brosnan and Stephens throwing each other through glass as they cycle through an eclectic array of swords.

The lack of cohesion between the dialogue, tonal shifts, and disastrous special effects is greatly Tamahori’s fault but Broccoli and Wilson need to share in that blame.

In the behind-the-scenes featurette Declassified: MI6 Vault, you can see the production’s faults firsthand. Of course, complications arise and many aspects of films aren’t locked until the last minute but given the importance of this particular Bond film, it comes off as neglectful. Purvis and Wade chortle to themselves about the slow pace of work on the screenplay. Casting Director Natalya Krimenskaya was in a holding pattern because of that. The official title of the movie wasn’t even announced until after the film’s big press conference. Purvis & Wade cheekily mention the rumored titles are even on the table; a sign that there is not a clear direction this project is heading.

The buck ultimately stops at Broccoli, Wilson, and Purvis & Wade. It’s like they had a Ph.D. dissertation and didn’t get to it until the night before it was due. Perhaps that’s why they thought a run-and-gun director like Tamahori would work.

Despite all its issues, the movie was an unmistakable box-office success. It became the highest-grossing Bond film of its time. The audiences of the day didn’t even seem to mind, giving it an A- cinema score.

All-in, Die Another Day is a notable Bond film for several reasons. Principal of which was due to the world-changing event that took place during its production. The 9/11 attacks upended the Western world and, in turn, what they expected from their entertainment. The classic Bond villain was no longer a believable threat to the world. Existential danger was more palpable, more real. Broccoli and Wilson understood this and decided to pursue a completely different path for Ian Fleming’s world-famous spy.

Die Another Day was a turning point for the franchise. It made Pierce Brosnan the only Bond to be let go from the role. It also ultimately brought us, Daniel Craig, as the gritty rebooted agent and the greatest Bond movie we’ve got, Casino Royale. Thus, James Bond lived to die another day.