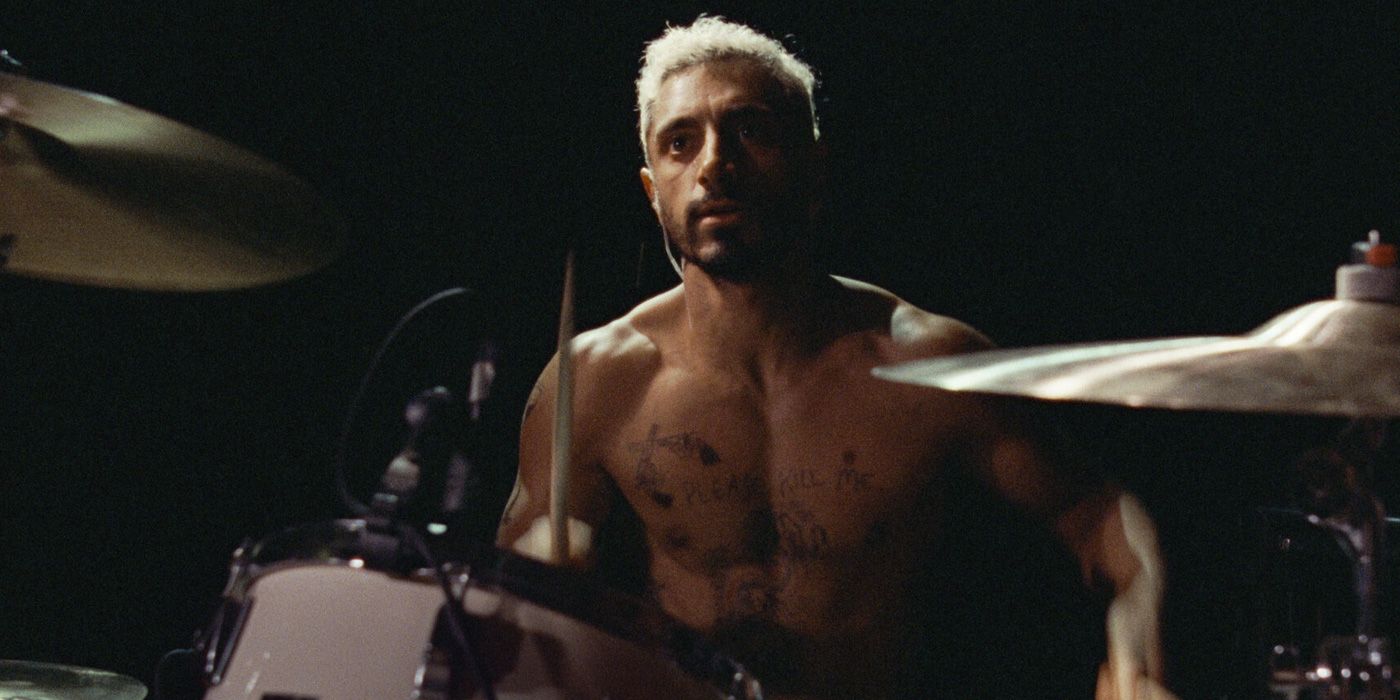 Many film buffs and music nerds are at least somewhat knowledgeable of the origins of Darius Marder’s highly-lauded Sound of Metal. Inspired by the unfinished film Metalhead starring the real-life husband-wife-duo and sludge-metal/noise machine outfit Jucifer. The story tells a highly fictionalized account of their RV life on the road incorporating the theme of hearing loss and subsequent lifestyle changes that come with such a loss. Unfortunately, ‘Metalhead’ never got off the ground, but fortunately, a retooled version arose in its ashes, and it is quite remarkable.

Sound of Metal is a reflective kaleidoscope of contemporary life capturing a man navigating two seemingly different communities. The brilliant opening sequence shows protagonist Ruben Stone (Riz Ahmed, an inspired casting choice) in full glory, performing in a modestly successful experimental punk-metal band Blackgammon with his girlfriend, Lou (an understated Olivia Cooke). The abrasive tune they perform is reminiscent of many avant-metal and noise rock bands such as Uniform, Swans, Daughters, Lingua Ignota, Battle of Mice, and Cult of Luna with Julie Christmas. It is not textbook metal music by any means. Blackgammon represents a particular niche in the metal community that is rarely depicted in mainstream cinema, and ‘Sound of Metal’ gives viewers a window into this peculiar and wonderful world of noise. Ruben and Lou’s world is both open and incredibly insular as they tour the states in their RV, living in co-dependent bliss. Lou struggles with self-mutilation, and Ruben is a recovering drug addict, and they essentially stay strong by staying immensely entwined. It is a loving relationship but not necessarily the healthiest one. This dynamic is tested when Ruben loses his hearing and seems to be on a fast track to relapse. The first act sets in motion the events that are about to unfold. Ruben faces a great upheaval now that his core identity has been stripped away. A world of noise is now a world of silence. There is something a bit observational in the film’s depiction of Ruben’s circumstances. This style benefits the story tremendously as it allows viewers to empathize with all the players involved. Ruben (with the encouragement of Lou) ends up in a sober house for the deaf and hard of hearing. No more tour, no more band, no more Lou; Ruben now has to learn an entirely new way to live.

The film’s second act gives viewers a window into another community that is not widely depicted in mainstream media. Ruben is now fully immersed in the deaf community. The film subverts expectations at this juncture of the film. Instead of floundering and relapsing, Ruben actually starts to assimilate into this community and comes close to thriving. This reveals another layer to Ruben’s character. He overcomes adversity without co-dependency. However, Ruben (understandably) still longs for his old life, his ideal life, and somewhat impulsively pursues cochlear implant surgery by essentially selling his ‘old life’ (RV and music equipment). While this can be seen as a disappointing, almost regressive turn, it fits his character. Ruben is not stupid, but he is incredibly stubborn. He is undoubtedly someone who has to learn things the hard way. While it is a pleasure to see Ruben ‘learn how to be deaf.’, it is still easy to understand Ruben’s motivations to return to his musicianship and reclaim his pre-deaf identity. It also makes one empathetic for Joe (Paul Raci), who runs the sober house and takes pride in Ruben’s success, and is disappointed at Ruben’s decision to ‘fix’ his deafness.

This leads to the final and perhaps most bittersweet portion of the film – Ruben’s reunion in Paris with Lou. Now re-equipped with a hearing implant, Ruben hopes to retrieve his love and go back to making music on the road. However, although she might not be fully cognizant of this herself, it becomes apparent that Lou has moved on. Lou and Ruben both, in their own way, learned to heal and evolve without the other. Lou still loves Ruben but no longer has the need for their old lifestyle. In a way, Ruben’s ‘need’ for Lou still exists, but his love for her wins out over his need for her, and he heartbreakingly (and very graciously) decides to let her go. This also underscores Ruben’s growth as an individual. Ruben’s life is now essentially a blank slate, and on the face of things, his current circumstances seem somewhat bleak but, in that bleakness, Ruben finally comes full circle and understands the beauty of stillness. Powerful stuff.

While the film’s narrative structure is straightforward, the story itself is a mosaic of love and loss, noise and silence, triumph and sadness, hope and despair, inner turmoil and inner peace. The performances are authentic and down-to-earth; there is no show-boaty Oscar-bait scenery-chewing. This is a (mostly) quiet portrayal of a contemporary way of life in the early twenty-first century.

Ghostbusters: Afterlife is a Tribute that Forgets What Made the Original Great

The English Patient at 25: In Memory, Love Lives Forever