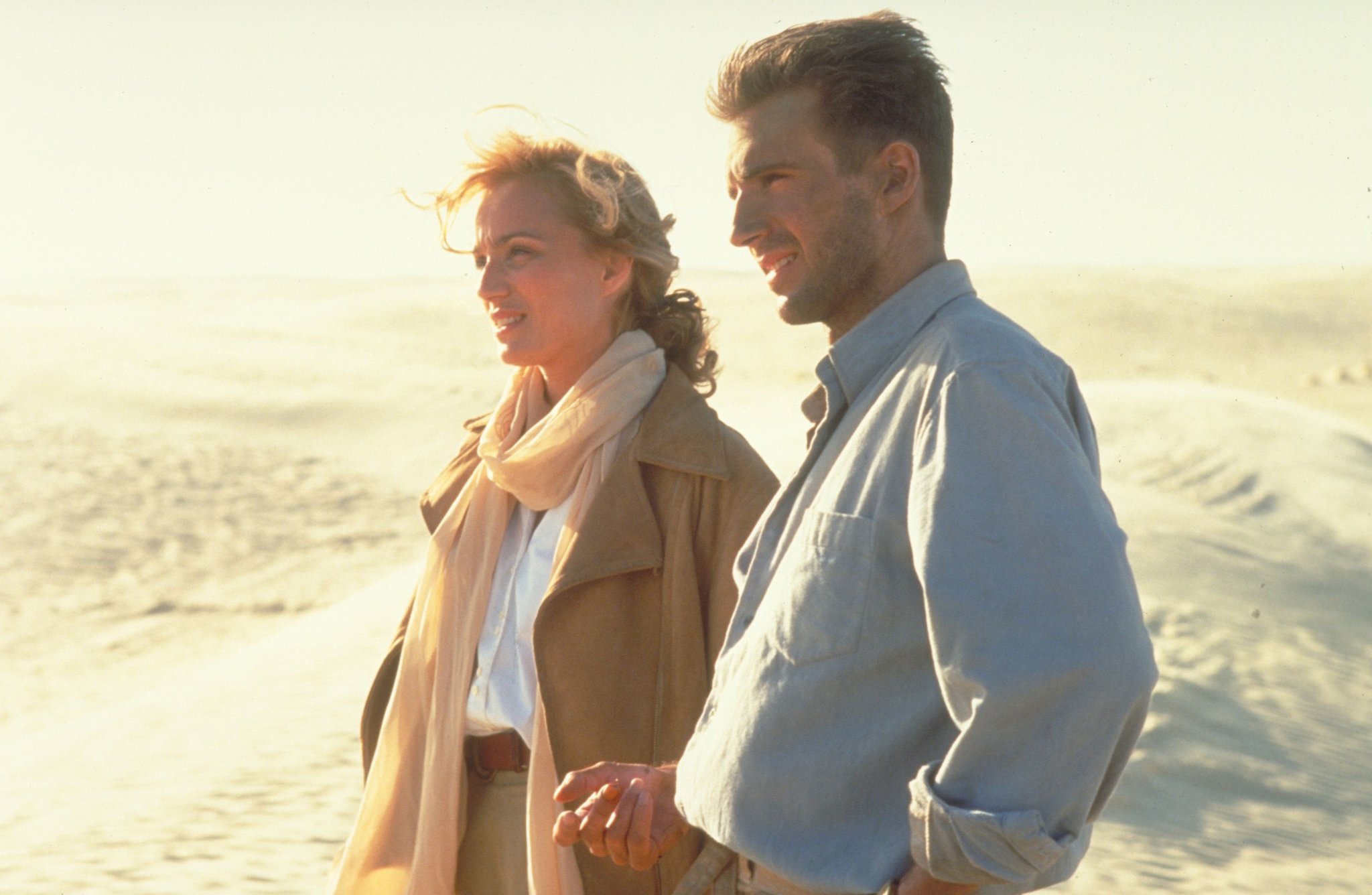 The movie which did me in was a half-comprehended French-dubbed version of The English Patient I watched with my father (who paid dearly for the film degree which ensued!) when I was sixteen, and about which I wrote my film dissertation a few years later. It must have been the over-the-top melodramatic sensibility peppered with the occasional wry witticism, not to say humour, which first enchanted my teenage self, and Minghella’s lyrical and sophisticatedly reminiscing imagery which sustained the special status of the film in my consciousness.

The opening sequence in which the plane carrying Katherine Clifton and Almásy is shot down by a German sniper unit is an instance of the defamiliarisation of cinematic war tropes used recurrently as the film unfolds – nothing in the serenity and peacefulness of the sensuously-rolling sand-dune landscape prepares the viewer for the onslaught of machine- gun fire which will emblaze the pilot and bring down the plane. Moreover, the location of the action is quite atypical of films dealing with the Second World War- one hardly expects to see German artillery shooting down English planes among the sand dunes of the Libyan Desert, or Bedouin tribesmen trading firearms with the warring parties.

Once the action moves to the villa in the impossibly picturesque Tuscan countryside, however, war in the present tense gives way to fragments of recollections and small steps towards attaining closure of the war chapter in the characters’ lives. Hereafter, the notion of the world war that is about to fizzle out becomes more of a memory than a ubiquitous reality. Its presence is like a shadow perceptible in details of day-to-day life: we can see the damage inflicted by the war in the ruins of the staircase, which Hana ‘repairs’ with the aid of volumes from the monastery’s library; the scarcity of food and morphine, the strange cohabitation of a nurse, a thief-turned-spy and a team of sappers clearing the area of mines.

The relationship between Hana and Kip provides some of the most lyrical scenes in the film, namely the one taking place in the Convento di Sant’Anna, when Kip devises a pulley with which he elevates Hana to the frescoed ceiling depicting an array of saints, illuminating the somber church with a red flare. The sheer visual splendour of this scene and the romantic atmosphere it instills almost make one forget the battered state of the shelled church, and the two characters’ professions. Hana and Kip, the sole drafted soldiers out of the central characters, tend to the aftermath of warfare, trying to “undo” the war rather than enact it.

The complex multi-layered take on the theme of war inscribed in the characters’ sinuous destinies differs from the standard rhetoric contained in straightforward, unequivocal works, which have often tended to depict the evil of war by adopting clear-cut good guys /bad guys, us/them dichotomies, or proclaimed heroes and demons (talking of demons, one only has to contrast Spielberg’s direction of Ralph Fiennes as Nazi war criminal Amon Goeth in Schindler’s List with his interpretation of suspected German spy Lászlo de Almásy in The English Patient to note the difference between the two directors’ approaches to the question of historical guilt). Instead, The English Patient seeks to purposely problematize the concepts of the enemy, the traitor, and the winner. One only has to pose the question ‘Who is the enemy?’ to realize that the film offers no easy answers. Is it the Germans, or the British, or the jealous husband?

“I am not in love with him, I am in love with ghosts,” answers Hana when Caravaggio accuses her of being in love with her patient. Hana, the only woman in the villa, is also its most vulnerable inhabitant (outwardly at least), the one we see crying on several occasions. Twice, however, it is out of compassion for her patient – when she overhears his account of Katherine’s death, and when she finally helps him die. Perhaps there is some degree of truth in Caravaggio’s insinuation that Hana’s charitableness is partially due to her desire to forget her own “war wounds” (the deaths of her fiancé and her close friend), by taking care of those worse-off. In this light, the patient’s past seems to exorcise her “ghosts” and enable her to engage in an albeit short-lived relationship with Kip.

The villa in The English Patient is a haven of sorts for survivors from the war, who have difficulty coping with the aftermath of a conflict as ubiquitous as the Second World War. It is a place where the characters have the opportunity to “swap war wounds” and revisit the past in an attempt to come to terms with their experiences, or simply resurrect whatever precious memories they can. One can probably draw a distinction between Hana and Caravaggio on the one hand, and Almásy on the other, as the former actively took part in the war and appear to be shell-shocked, scarred, almost suffused with their traumas, while to Almásy the conflict is somehow external- although physically maimed by it, his suffering takes place on an intimately personal level, independent of international conflict and politics.

“Gradually we became nationless. I came to hate nations. We are deformed by nation-states…The desert could not be claimed or owned –it was a piece of cloth carried by winds, never held down by stones, and given a hundred shifting names long before Canterbury existed, long before battles and treaties quilted Europe…Erase the family name! Erase nations! I was taught such things by the desert”, says the English patient in Ondaatje’s novel… “We are the real countries, not the boundaries drawn on maps, the names of powerful men. An earth without maps, that’s all I’ve wanted…” writes Katherine as she’s dying alone in a dark cave. An earth without maps: beyond the sympathetic victims, breathtaking landscapes, and imperturbability of the desert, The English Patient is a rejection of cultural homogeneity and nationalism. Of course, the author acknowledges these as utopian- an earth without borders is only found in the desert and conscious of the futility of this idealistic vision, the film has no lessons to give other than to show how the wars of dividing and possessing these utopian geographies affect the lives of characters who variously long for passion, adventure, friendship, but whose yearnings are inevitably stifled by war… “Thousands of people could have died”, says Caravaggio referring to Almásy’s surrendering of North African maps to the Germans in exchange for a means of returning to his dying lover. “Thousands of people did die. Just different people…” comes Almásy’s disheartening response. Just as there are no winners and losers, there are no good or bad sides. There are just people, and thousands of them die, whether Allies or Germans. The dismantling of the myth of the hero and the rejection of the good/bad paradigm are, in my opinion, the most significant ideological achievements of The English Patient.

Although, of course, a happy end is out of the question, the film ends with an emblematic sequence in which the main characters are ‘resurrected’, as though the filmmaker, unlike the novelist, did not have the heart to definitively ‘kill off’ his characters. This ‘revival’ comes in the sequence shortly before the end, mirroring the film’s opening: Almásy and Katherine flying in a plane above the desert. This time, however, the sequence ends before the plane is shot down with a cut to Hana preparing to leave the villa, having inherited the patient’s copy of Herodotus along with all the recollections and stories it preserves. It is in Hana’s memory that Almásy and Katherine will no doubt live from now on. The ending is unapologetically melodramatic, but then again maybe that’s all there ever is to it – the exaggeration of melodrama as the only means to forcibly elevate an aspect of life above the mundane and the average.