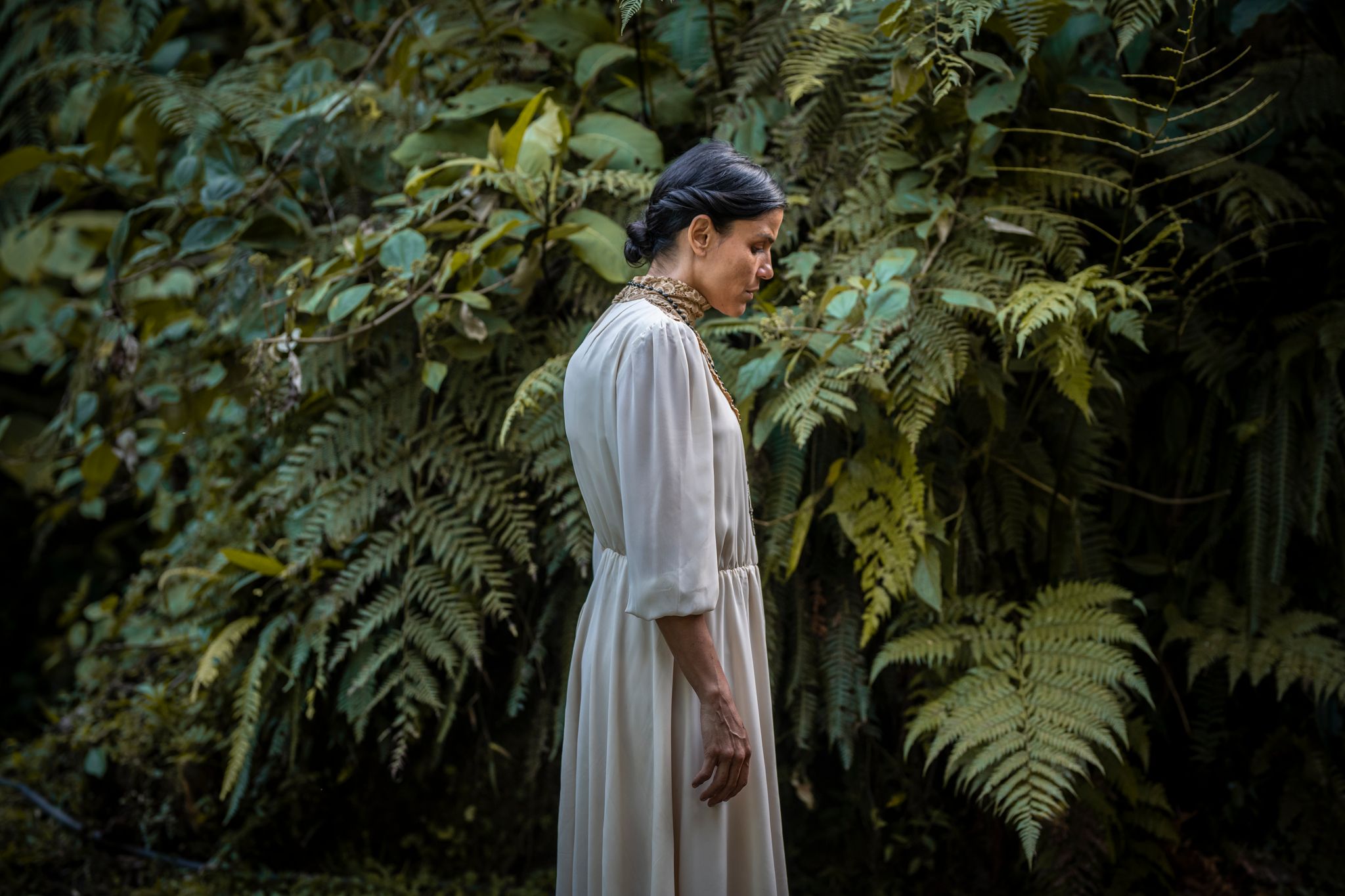 “Do you believe in the Virgin Mary?”

Religious parochialism and repression come under critique in a tale of middle-age mystical and sexual awakening with Clara Sola: a mesmerizing tale set on the outskirts of lush Costa Rican wilds. A later-years coming-of-age that weaves in spirituality set against cruelties people put upon those who don’t fit the mold. Nature and supernature gently intertwine in a lover’s embrace, as the titular Clara seeks to discover sides of the world she has been forbidden. Clara Sola is, in short, a beautiful and powerful film.

Director Nathalie Álvarez Mesén brings us this lush layered narrative, from jealousy to marginalization, with careful nuance. Dipping its toes into magical-realism, Clara Sola follows 40-year-old Clara (Wendy Chinchilla Araya) – someone with a deep connection with both nature and the divine. Born with a twisted spine, and kept strictly within the confines of her small Costa Rican town, her mother keeps her infantilised as she uses her for public showings. It’s kept vague enough, though the implication is that these religious healings are equally for monetary gain and spiritual belief. But the arrival of a handsome young man, Santiago (Daniel Castañeda Rincón), sets in motion Clara’s grasp at real freedom.

There’s a generational divide presented that does a great job of reflecting reality. The younger characters, even the lovestruck and precocious niece of Clara, show some empathy for the girl. Santiago is the only one outside of Maria who acts more like Clara is an ordinary person, and set against the older townsfolk who gather to lay hands on the girl touched by the Virgin Mary, they don’t treat her as a religious idol or an attraction. These glimpses at normality are what draw Clara in, what build her obsession with Santiago and fuel her repressed sexual desires. She has her personal agency locked away by her mother, who sets up cloths to show where Clara’s limit of wandering is, and who even rejects much needed surgery on her twisted spine in an effort to keep her under her control.

The sights and sounds of Clara Sola are impressive, in particular the framing which is spectacular throughout the film. We get focus on body parts, exactly enough of the scenery to place us and build the atmosphere, and a load of beautiful shots taking in both the natural sights and the human element. There’s subtle background or foreground elements that line up just perfect, like a pan that moves a painting of the Virgin Mary directly over where Clara herself is.

Then there’s a recurring motif of a waving hand, swimming up and down, representing the freedom of movement or the flight of a bird. Each of these shots frames it just on the hand, focusing in, and often presenting Clara’s hand on it’s own. The soundscape of Clara Sola is just as beautiful as the cinematography, with sweeping strings complimenting the sounds of surrounding nature. I always stand by the power of silence and of natural sound, and knowing when to bring in and leave out music is a major bonus to a film’s atmosphere.

Colour bursts from parts of the film, even with the rich Costa Rican forest surrounding the narrative we get these pops of brilliant reds and blues. Reds hang in the house, along with a vibrant altar of worship dedicated to the Virgin Mary drawing the eye. Then the blue of the dress of Clara’s niece Maria (Ana Julia Porras Espinoza), something that catches the eye of Clara herself, and she longs for the pretty dress with the deep colour rather than her pale ensemble. The white of the fairytale white horse Yuca, and the dim of the room she performs her healings in.

On that note, there is a fairytale quality mixed in here, albeit one that is twisted and preternatural. The domineering mother, the dress and the gala, the white horse who understands and is understood by only Clara, and the handsome stranger who shows her a new world. Things cannot be so simple though, as things roll from discovery to rebellion, into hurt and a dismal desperation. Then comes echoes of Stephen King’s Carrie, localized quakes from extreme emotions, and an ending in conflagration. There’s catharsis in the denouement, but a bitterness to it, the sharp writing of Maria Camila Arias and Nathalie Álvarez Mesén leave us with imagery that could be interpreted multiple ways.

It cannot be understated just how incredible Wendy Chinchilla Araya’s portrayal of such a unique character is. From touching childish inclinations and hyper fixations, to the heart-rending reaction to not quite being able to grasp a sense of agency when the elders of the town hold on to their link to spirituality. Then there’s her almost feral breakdowns, a mind torn between what she has always known, and what lays on the other side of the barriers. A professional dancer, Wendy Chinchilla Araya brings this otherworldly quality to Clara that heightens the hypnotic aura Clara Sola builds.

Clara Sola is a powerhouse of a film, blending the mystical and the oh so very real seamlessly. There’s freedom, the breaking of boundaries, the finding of one’s self. Then there’s loneliness, isolation, and nature torn away. And at the heart of it all comes not just that desire for freedom and the search for it, but also the somber realization that some of us are just destined to be alone.

What to Do with the Dead Kaiju? Squanders a Compelling Premise

One For the Road: A Dramedy With Style and Grace