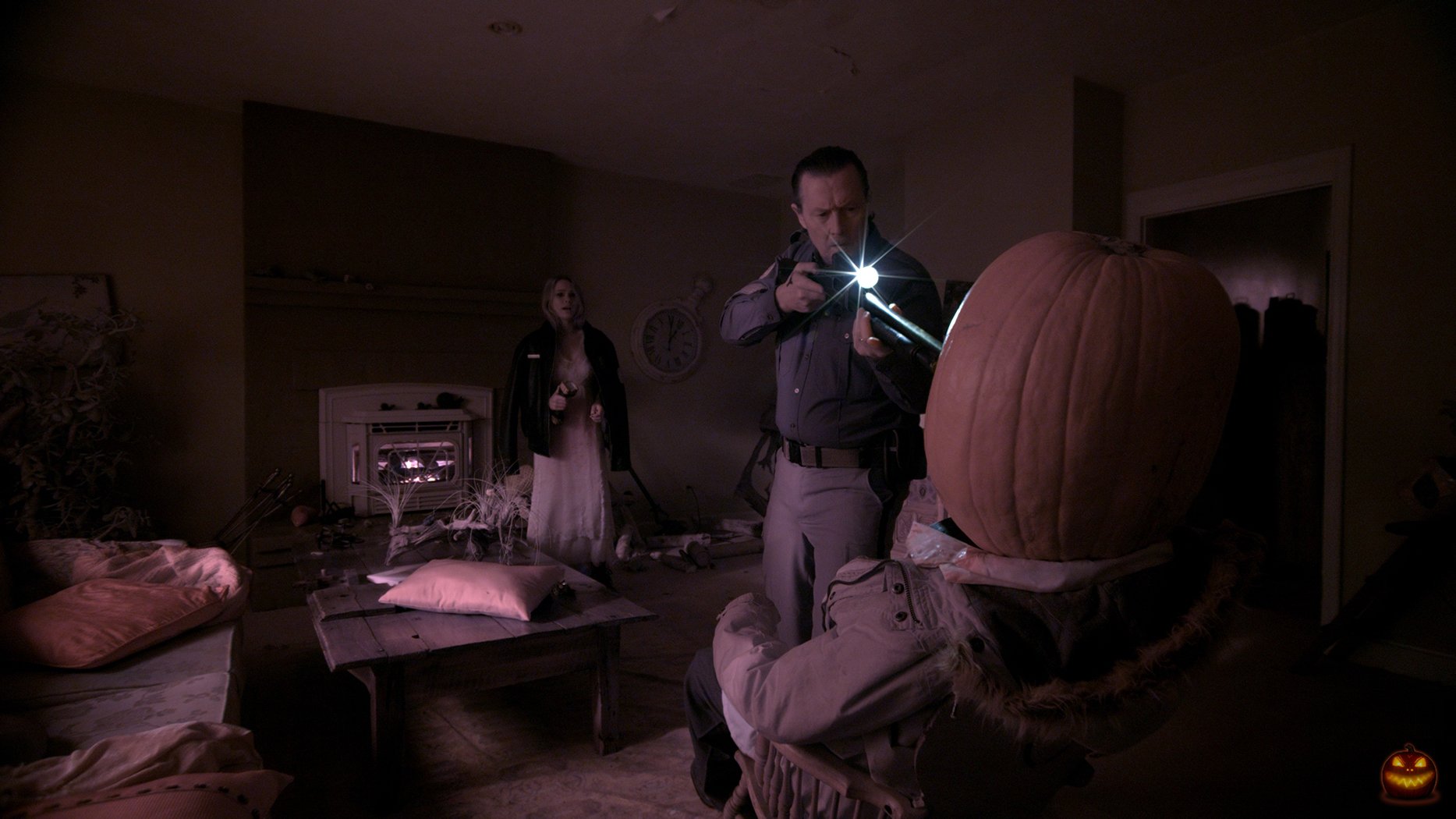 Movies about gaggles of sinister children scurrying about getting up to all kinds of bloody mischief (or alternately, standing stock still, staring into the middle distance and looking creepy) are nothing particularly new to horror films. Movies like The Innocents, Children of the Corn, Children of the Damned and countless others have all found success in gleefully twisting the popular image of children as innocent and harmless and capitalizing on that subtle unease felt by so many people in the presence of the young. It’s an ever-growing horror sub-genre, and once which Bruce McDonald’s Hellions aims to stake a claim in.

Set on Halloween night in what we can only assume is a small Canadian town, our protagonist is Dora, a teenage girl who abruptly discovers that she’s several weeks pregnant. Alone in her house, while her mother and brother are out trick-or-treating, Dora comes under attack by a swarm of creepily masked children, who arrive with the severed head of her boyfriend and the intent to harvest Dora’s unborn child to add to their ranks.

While McDonald’s other notable horror entry, the fantastic Pontypool, managed to craft a cracker of a flick with one location, a neat idea, and just enough style, Hellions fails to replicate that success by doubling down on style and scaling back on creativity. Once the titular hellions arrive, the film quickly descends into a bewildering exercise in stylistic excess, with dreamlike and surrealistic elements thrown in with what feels like very little reason or motivation beyond “eh, why not”.

The most striking example is that the film suddenly transitions from regular old night-time shots to a strange kind of day-for-night, with all the colors washed out and covered by a pale purple or pink filter. It’s only every directly addressed by one character, who makes an offhand reference to a “blood moon”, which seems like a futile attempt to justify the strange choice. Now, there is an argument that can (and should) be made that style shouldn’t necessarily have to justify itself. Style for its own sake is perfectly fine. That being said, it’s entirely possible for style to feel like a shallow affectation, a put-on that feels less motivated by the impulse to create something artistically valid and more like an attempt to -appear- artistic while still being teaspoon-shallow in the long run. Hellions, with its varied attempts at an almost Lynchian surreality, feels like one such shallow attempt at artistry. Its devices, which range from that weird color filter to dreamlike editing and sudden strange, non-sequiters like when Dora’s reflection suddenly talks to her while hungrily munching on a fetus, feel like an artifice meant to distract us from the fact that Hellions just doesn’t have much going on under the hood.

Which is a shame, because it so easily could have been something marvelous. The panic and terror that comes from the sudden arrival of an unexpected pregnancy is such fertile ground for horror, and Hellions has countless opportunities to say something meaningful about the way we address teen pregnancy and even abortion, especially in more conservative, small-town crimes. But any meaningful or interesting statements the film tries to make seem to get lost in the jumble of surreal atmosphere and imagery. Hellions feels like that friend you have in college who wants to appear so deep and cultured, with his eclectic taste in music and fashion, but then you catch them eating a big mac and marathoning NCIS and suddenly “AHAH! The facade is broken, you’re boring like the rest of us! Charlatan, impostor, MOUNTEBANK!”

Hellions even feels like such an experiment, such a divergence, that when something more recognizably “Bruce McDonald” happens, it winds up feeling out of place. Early on, Dora uses a staple gun to seal shut a gaping neck wound, and what should feel like a visceral gore beat feels like a scene from an entirely different movie. Ditto, the scene where, upon learning the evil tykes’ weakness, loads up some shotgun shells with salt and appears to go into ass-kicking mode before quickly dropping back into helplessness. Hellions feels so confused, so unsure of what it wants to be, and winds up a jumbled, disjointed mess.

The potential for a good movie is absolutely here. All the performances, from Chloe Rose as Dora to Robert Patrick as helpful sheriff Corman, are solid. What gore effects there are well-executed and convincing, and as previously mentioned, the film sets itself upon such fertile ground for telling an interesting, insightful story. But that fertile ground goes to waste, as Hellions just goes to the supermarket to buy its products instead. Perhaps McDonald’s biggest fans will find something to love in Hellions, but this is undoubtedly one of his weakest efforts, and won’t have much to offer for casual or dedicated horror fans.