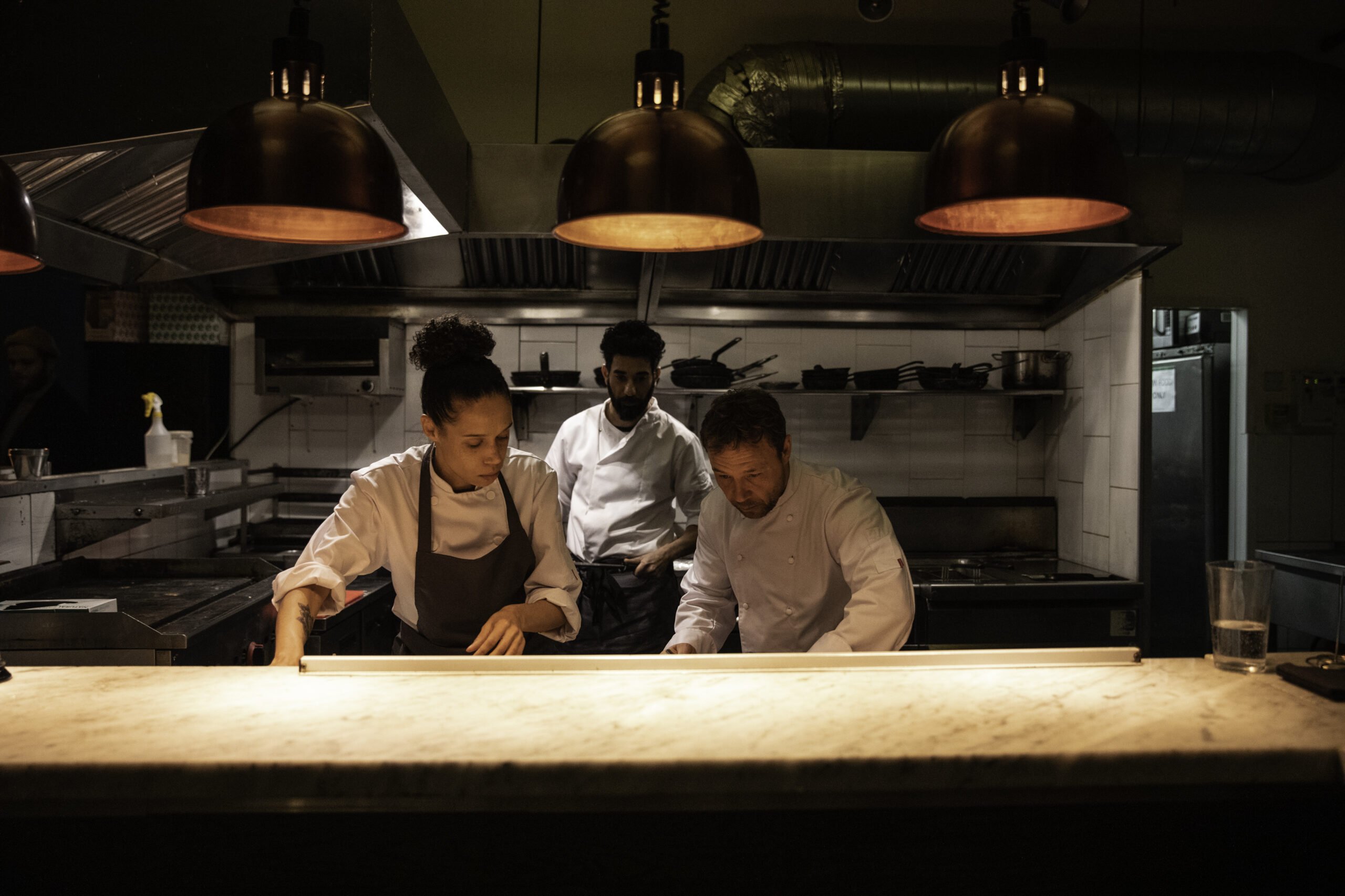 Working life is difficult at the best of times. But for a group of chefs and waiters at a popular new restaurant during arguably the busiest time of year – Christmas – it can be torture. Led by head chef Andy Jones (Stephen Graham), tensions are already high before the doors even open, only heightened as further complications arise, including a proposal, a family whose patriarch is racist towards the place’s only black waitress, and the visit of Andy’s former mentor Alastair Skye (Jason Flemyng).

Not content with putting his cast through the wringer when it comes to the volatility of the environment and the relationships between staff members, director Philip Barantini has also opted to develop this 90-minute gem as a complete tracking shot, and this style is carried throughout – there are no hidden editing blends and sneaky cuts, just one, continuous, streamlined take, and it is truly an impressive feat of filmmaking.

Starting with Andy, whose personal life threatens to spill over into his professional, the story (and camera) seamlessly travel from person to person, including Andy’s right-hand Carly (Vinette Robinson) and manager Beth (Alice Feetham). Our introductions to the characters are niftily handled upon Andy’s arrival, as a health inspector goes through each member of staff and enquires about their roles, a handy expository tool that also bleeds into the difficulties they face on a particularly busy day.

With each role clear cut, it’s time for the restaurant to open and the night to begin. Caught unawares by the fact that his former mentor will be visiting him, attempting to undermine him at every chance he gets (including bringing along a food critic for company), Andy is beautifully played by the incomparable Graham, an actor whose stardom, from Boardwalk Empire to this year’s Venom: Let There Be Carnage, is only on the rise. An incredible display of both a man whose desire to create is threatening to overwhelm him and a vulnerability shown through his interactions with his family via phone, he is nothing short of perfect.

Also impressing is Robinson as his right-hand Carly, a woman buried under the pressure put upon by her boss, but who gets by anyway, until an altercation brings out her anger – one suspects Carly has more to offer than this restaurant is letting her express, and it’s a subtle performance expertly delivered.

As the drama threatens to boil over, a wonderfully balanced theatricality takes place. With equal attention being placed on the difficulties the staff face over the course of a night, whether it be racism, nut allergies or one particular staff member who is always late and doesn’t pull his weight in the kitchen, it’s a race to see which pot will spill over first, and who will be burnt in the process. A tight wind until the coil comes lose and everything unfurls, it is breath taking in the best (note: worst) ways possible, firmly planting your heart in your throat throughout.

A wonderfully crafted and exceptionally performed piece, Boiling Point (Bod Vardu) is a near masterclass in innovative filmmaking. A 90-minute tracking shot that doesn’t come off as a complete gimmick, it’s a taught and often painful take on the high-pressured job industry, a satisfying feast for the eyes.