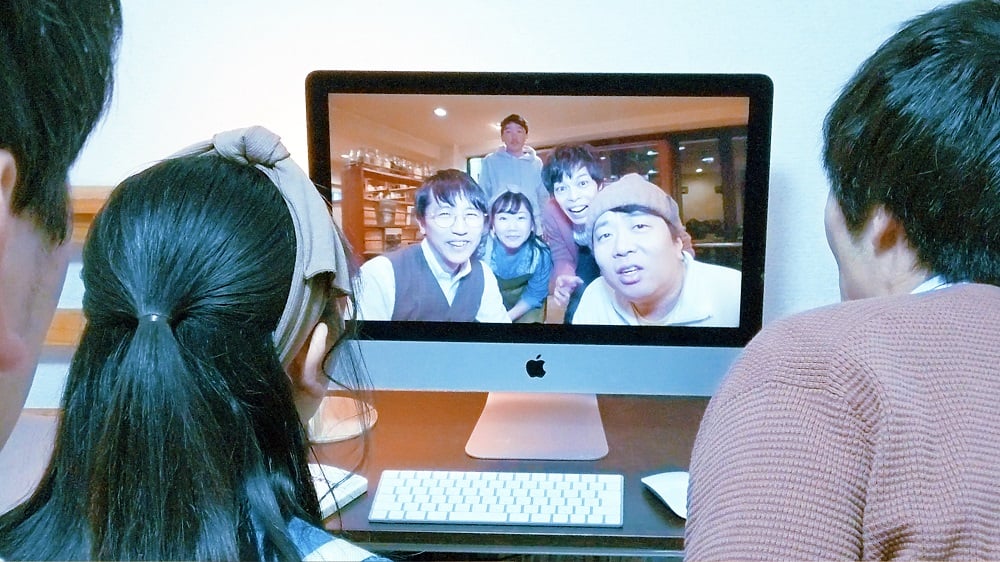 Fantastia 2021: Beyond the Infinite Two Minutes

Junta Yamaguchi’s Beyond the Infinite Two Minutes is a testament to how much you can do with very little. A brain-bending time travel comedy shot in just a handful of locations on an iPhone, the film takes a relatively simple premise and then immediately begins building on it, creating an ever more intricate house of cards that will keep you engaged even if you occasionally struggle to keep up with the plot.

Beyond follows cafe owner Kato after discovering an inexplicable time anomaly involving a TV and a computer monitor. What is recorded by one is sent back two minutes in time and displayed on the other, the observer of which will then be seeing the future. This means Kato will see himself appear on one, the two will converse, and then he’ll go to the other screen and perform the other half of the conversation he just had. It’s a bit confusing even from the outset, and it only gets more complicated from there when Kato’s friends arrive and start messing with the screens in ways that end up causing chaos.

While the film is by no means long, clocking in at just an hour and ten minutes, but it uses that time to take the initial setup and run with it, adding layers of complexity that will have even veterans of time travel movies and the causality nightmares they often involve occasionally pausing to make sure they have it all straight in their heads. The script is by far the most complicated element of the film, which is a good thing, and the film’s real-time editing style, few locations and minimal cast help keep it from being overwhelming. The film is shot in what is either a genuine hour and ten minute take or a series of very cleverly cut long takes, and regardless of which it is, the commitment to telling the story in real time over the course of an evening keeps things simple.

While other recent time travel movies have been bogged down by bloated casts, outrageous budgets and convoluted, globe-spanning plots that work together to ensure the audience is completely lost, Beyond the Infinite Two Minutes is only complex where it needs to be and simple everywhere else. We know who the characters are, what they’re attempting to accomplish both immediately and in the long-run, and where they are. These may sound obvious, but it’s those firm fundamentals that allow the film to get crazy without losing the audience or tripping over itself. It’s a remarkable feat that in a film with this many brain-bending moments, the only part that really strains credulity is the length of the power cords of the two screens that drive the plot.

It also helps that the film maintains a relatively light tone throughout, only briefly flirting with the implications for things like causality and determinism that the “Time TV” potentially opens up. You could easily go to some very dark places with a concept like this, for example the question of what it means when you don’t perform the acts that you saw your future self perform. Does that create a time paradox? Will you destroy time and space as we know it? Is this how a multiversal war starts? The answer is a firm “don’t worry about it”, and that works great for a film like this.

Beyond The Infinite Two Minutes is already drawing comparisons to 2017’s superlative One Cut of the Dead, and frankly, those comparisons aren’t unwarranted. Both are superb low-budget genre films that rope you in with an interesting premise and the perfect mix of ambition and restraint, beautifully using just a handful of elements and some clever, intricate screenwriting, and a lot of passion for building something great.

The Suicide Squad, Surprisingly, is a Nearly Total Triumph

Satoshi Kon: The Illusionist Celebrates One of Anime’s Greatest Directors