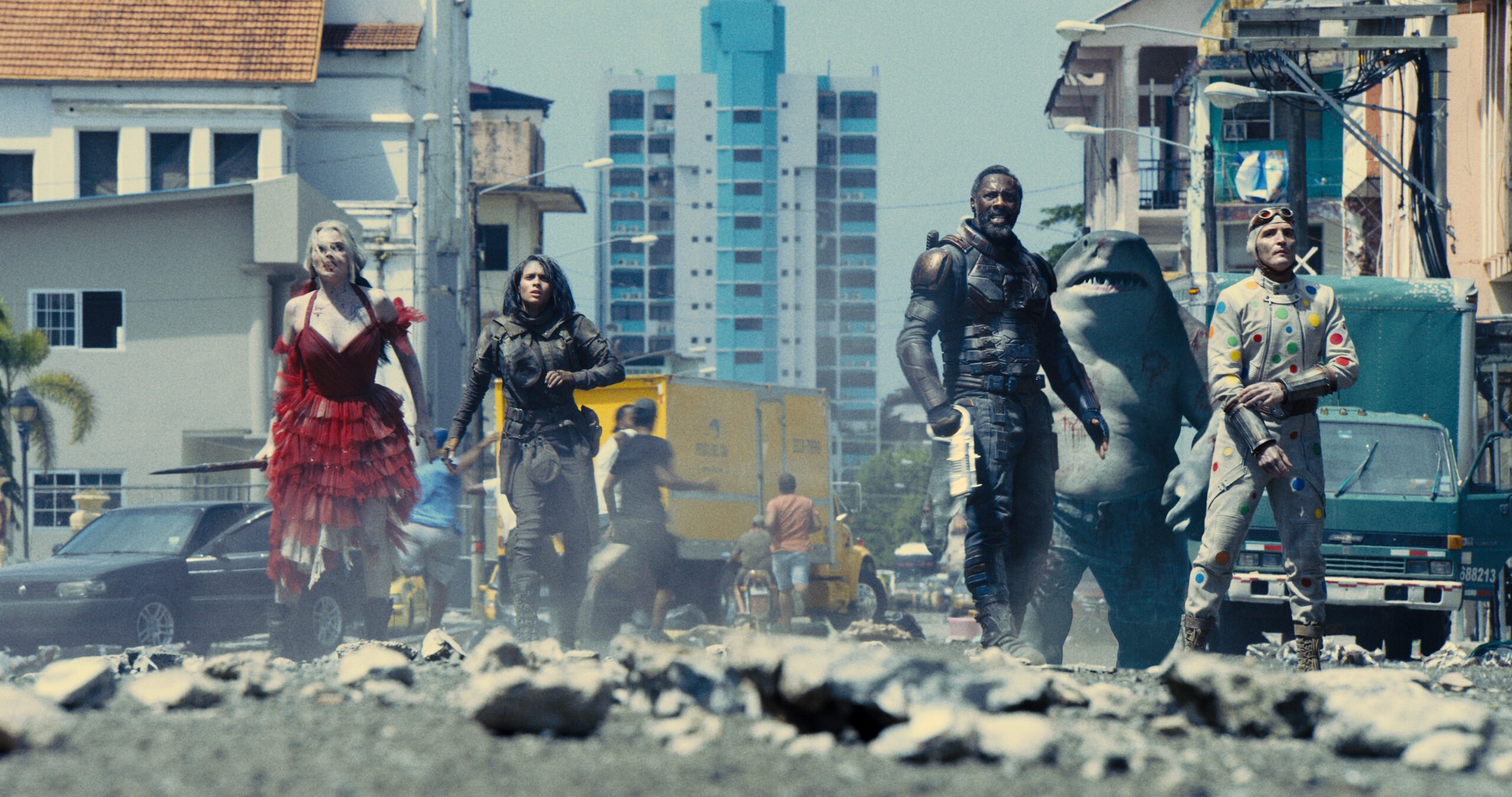 The new DC superhero movie The Suicide Squad has added a definite article to the title of its predecessor, Suicide Squad, which arrived almost exactly five years ago. But it’s also added a lot of things that the previous film lacked- excitement, joy, coherent action, and decent filmmaking.

The 2016 Suicide Squad film represented a true nadir of the area of superhero movies. Whether it was the butt-ugly visual style, the incomprehensible plot, or the too-large cast of underdeveloped characters, the first Suicide Squad film was a singularly unpleasant time at the movies. It was directed by David Ayer, although Ayer has said that the theatrical cut that was released did not meet his approval.

Now, the Suicide Squad concept has been revived for a sort of sequel, which has retained the original plot concept and a handful of characters but changed just about everything else. The director is James Gunn, who directed both Guardians of the Galaxy films, and brings a lot of the elements more associated with those films and other Marvel pictures- witty banter, pop music needle drops, and one of the characters being a surprisingly incongruous animal.

The new Suicide Squad doesn’t try to tie in with other DC films — Jared Leto’s Joker doesn’t appear, nor does any other version of the Joker — but instead is focused on a standalone story.

Just as in the first film, shadowy government bureaucrat Viola Davis is assembling a crew of criminals and outlaws for a mission. Margot Robbie’s Harley Quinn is back, as is Joel Kinnaman’s Rick Flag. But mostly, the crew is made up of new faces, including Bloodsport (Iris Elba), Peacemaker (John Cena), Blackguard (Pete Davidson), Ratcatcher (Daniela Melchoir), and The Polka Dot Man (David Dastmalchian.) Also on board are two CGI animal characters- a walking and talking shark (voiced by Sylvester Stallone) and a weasel (Sean Gunn.)

That may sound like a lot of characters, which was one of the bigger problems with the first movie. But the new Suicide Squad is a lot smarter about characters- for one thing, some of them  (I won’t say which) got bumped off surprisingly early. For another, the film does a fantastic job developing such unheralded characters as Ratcatcher, who can communicate with rats, and Polka Dot Man, whose backstory and powers are a sight to behold. Even the shark gets some moments of pathos.

Speaking of characters, the film does more creative things with the Harley Quinn character than any of the films to date, especially a brief romantic interlude she gets, and her escape from prison. Elba and Cena have very good banter together, and Peter Capaldi has a strong supporting turn as a keeper of secrets.

The mission entails the characters essentially assisting a coup in a Latin American country called Corto Maltese, in a plot that gets way closer to real-life geopolitics than this type of movie typically does. The plot gets into whether the squad should be assisting the U.S. government, or helping to hide its secrets. In short, it’s a lot more interesting than whatever the hell the Enchantress was up to in the first Suicide Squad.

Be warned, this R-rated film is very violent and quite vulgar too. The guy sitting next to me had his five-year-old daughter with him; please, don’t do that. But the violence is creative and entertaining, and the action is directed coherently, which is far from a given in this sort of film. There’s one fantastic scene in which the kills are super-creative, but the punchline is even better.

Even the third act, rather than utilizing a giant energy force in the sky, goes to some creative places.

Gunn shows himself the exact right director for this material, bringing the same combination of competent action filmmaking and outstanding use of music previously seen in the two Guardians pictures. While the first Suicide Squad had obnoxious needle drops, Gunn does much better, especially with his use of Louis Prima’s version of “Just a Gigolo” in one of the Harley Quinn scenes.

I never thought I would like a movie with “Suicide Squad” in the title, but DC and Gunn have proven me wrong.

Whirlybird: A Heart-Wrenching Doc About Journalism, Family and Gender

Beyond the Infinite Two Minutes is a Brainbending Budget Gem