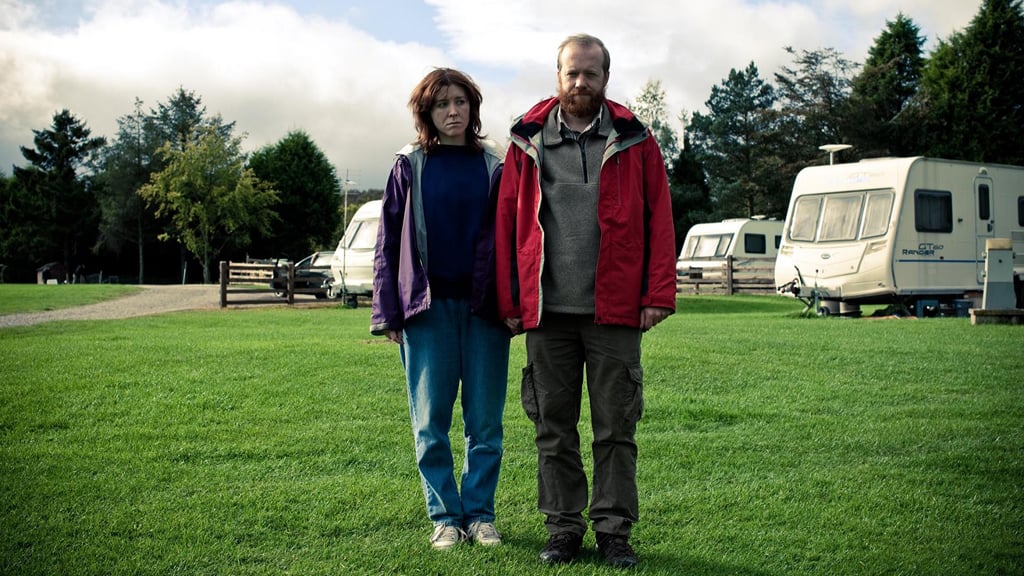 Either Ben Wheatley was at a boiling pot of pent-up rage, or the complete opposite and thus found perverse pleasure in humouring the rage fantasies and violent tendencies of the frustrated working-class white English male. Even his grit-fest, Kill List, is not entirely void of something approximating humour, even at its bleakest, blackest moments. But with his third narrative feature Sightseers, humour takes center stage and everything springs forth from and brings forth comedy: the gory violence, the psychotic romance, the meat-and-potatoes relationship drama, the deranged road trip through northern England with a caravan in tow.

Thirty-something Tina (Alice Lowe) lives with her possessive, borderline personality mother in a house filled with countless photographs and sketches of their beloved deceased terrier Poppy, whose death by knitting needle is portrayed in the film’s one and only flashback sequence. Tina meets Chris, a nice and mild-mannered Louis C.K. lookalike (not really) who claims to be on a six-month sabbatical from who knows what. They fall in love (or something like it) and despite her mother’s very verbal misgivings about caravans and strange men invading her “sanctum”, Tina takes off with Chris on a trip. As they depart to the synth-bass growls of “Tainted Love” on the soundtrack, the film tonally establishes itself as one not to be taken too seriously while simultaneously demanding full investment in whatever is to come, if you are to enjoy yourself that is.

Like a guy sharing his passion for 80s low-budget horror with a new flame, Chris takes Tina on a tour through the Yorkshire region, introducing her to things close to his heart, such as heritage trams, the art of mobile living. and the Derwent pencil museum. But what she is soon to find out – to the shocked/delighted laughs and groans of a Friday night crowd – is that Chris has a bit more on his chest and on his mind than the interests of a man twice his age.

For what it’s worth, it must be said right off the bat that Sightseers has some absolutely breathtaking images, and not at all in the grand, epic sense. As low-budget and DIY as his films are or seem, Ben Wheatley is a gifted visual stylist, and the way he chooses to build a sense of place, mood and character by the odd shot or two of an ominous landscape, a lone antenna or grasses shivering in the breeze is as effective a touch as it is in an Andrea Arnold film, and nearly – though not quite – as poetic. From the very outset, the cinematography is striking, direct credit to DP Laurie Rose whose use of darkness, in particular, is masterful, not only in Sightseers but also in Kill List.

So, sheltered and lovably goofy Tina falls for a man who could be anything from a sufferer of pathological rage to an unrepentant sociopath and serial killer. Triggered by anything from jealousy and insecurity, to frustration, to a dropped ice cream wrapper defiling a third-rate historical landmark, Chris embarks on a haphazard and blackly comic killing spree through Yorkshire leisure country, and Tina doesn’t seem overly intent on returning to her poor mum either. In fact, Tina turns out to be less of a meek mummy’s girl and more of an insecure, love-starved and rage-prone suburbanite herself. Like Walter Neff and Phyliss Dietrichson in Double Indemnity, Chris and Tina’s romance/tryst becomes inextricably linked to the secret they share, to the glimpses they’ve had into the blackness of each other’s hearts.

Sightseers, at certain points during its 95-minute runtime, calls to mind some ultimately greater films (other than Double Indemnity), in particular Badlands, Punch-Drunk Love and Gun Crazy, keeping in mind that two of these are in themselves variations on the Bonnie and Clyde mythology. Sightseers has the cross-country carnage of Terrence Malick’s debut, the violent tantrums and giddy romance of Punch, and the psychological histrionics of Gun Crazy, in tiny doses that is. A dangerously angry man like Adam Sandler’s Barry in PT Anderson’s off-kilter 2003 jewel, Chris (played with hilarious conviction by Steve Oram) lets Tina believe that he is writing a book and that she is his muse, only to later bemoan his inability to express himself when he is in fact doing so perhaps a little too well. But unlike Emily Watson’s Lena, Tina cruelly learns that she may not be enough for Chris despite her unconditional devotion, which is when hell releases its bowels.

What is Wheatley, who co-wrote this film with co-leads Alice Lowe and Steve Oram, saying about discontent and discomfort and disappointment? What is he trying to say about being middle-class, mediocre and approaching middle-age? Is he trying to say anything at all or is he doing what artists do better than anything else: taking something complex and barely articulable and making it a little less so. Some do this with earnestness while others do it with blood and guts and gross-out gags. Many won’t take to the latter because it often stinks of exploitation and juvenility, and of this, there are definite whiffs in Sightseers, but rather Chris and Tina than someone this side of the screen. But for all the talk of rage and gore though, this film is very funny, and it wants to be funny, in its droll, ironic, distinctly English way. It wants to make you laugh, even as blood squirts and skulls are pulverized against rocks. The crowd at the Forum Theatre in Melbourne ate this film out of both hands and then licked their fingers clean, or at least found it more than occasionally hilarious. Which raises the question: how much does the success of a tightly-strung gore romp like this depend on a generous audience response? Even a professed comedy which you might find breathlessly belly-busting can quickly cease to be funny in the face of hostile, deadly silent fellow theatergoers. Perhaps some audiences are more attuned to British humour than are others, but then Sightseers hasn’t earned too much love from its countrymen either, let alone non-English audiences. Curious.

Either way, the two leads, or rather three (because you must include the adorable terrier Banjo who won this year’s Palm Dog at Cannes for his spirited double performance) have splendid chemistry. As previously stated, the very amusing screenplay was co-penned by the two human leads and it shows. Accordingly, there is an ease to their performances, a naturalism that recalls the films of Mike Leigh, whose screenplays similarly originate from the actors. Lowe is an affable presence as Tina, perhaps being the audience surrogate for a sizeable chunk of the film. She is so vulnerable and doe-eyed; she just wants to love and be loved and she will do anything for love, and then she ends up doing too much.

The problem with a film like Sightseers is that it can be such fun to watch and such a visual pleasure to behold that one may fail to question whether it is simply an elegantly strung series of gags, belly-rolling one-liners and gore galore, and little else.

And then you consider the film’s strong emotional core and Ben Wheatley’s thematic preoccupations and think to yourself that there’s perhaps more to it.

The Hunt— A Painful, Frightening Film with a Powerhouse Performance by Mads Mikkelsen