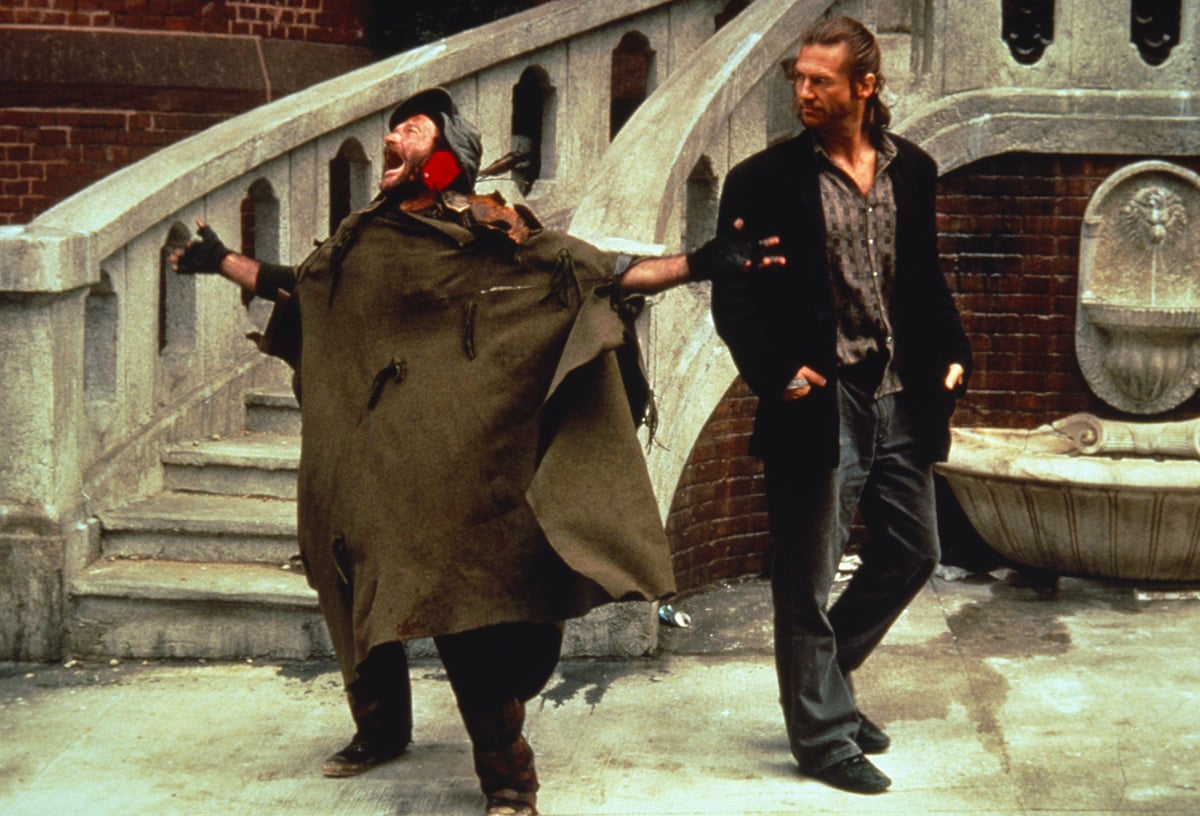 Popular culture’s depiction of homeless people in the 1990s, especially in New York City, wasn’t exactly a positive one. So leave it to Terry Gilliam, in 1991, to build a humane, empathetic, and very funny movie about a couple of down-on-their-luck guys, one of whom was a full-on street person.

That movie was The Fisher King, which was released in September of 1991, 30 years ago this week. Directed by Gilliam and written by Richard LaGravenese, the film represented a team-up of Jeff Bridges and Robin Williams, in an only-in-New-York tale of both humor and melancholy.

Bridges starred as Jeff Lucas, a ponytailed “shock jock” in New York. While what we see of Lucas’ schtick is pretty tame by today’s standards — Howard Stern, after all, already had a pretty big foothold by ’91, doing much more risqué stuff — his show inspires one of his callers to commit a mass shooting. This part of the film can really be seen as a proto “cancel culture” moment, by which I mean he was fired and absolutely deserved it. If that happened to Lucas today, he’d likely get seen as a martyr and make a lot of money from YouTube or Substack.

The events pick up three years later when Jeff is struggling and working at a video store with his girlfriend (Mercedes Ruehl.) Suicidal, he visits a homeless encampment one night, where he’s saved from a mugging by Parry (Williams), a homeless man who claims to be a knight looking for the Holy Grail.

The two soon become unlikely friends, and eventually, we find out more about Parry’s backstory, which was tied in with Jeff’s.

The banner between the two stars, with very different acting styles, was the film’s highlight, with Williams doing a version of his usual motormouth patter, opposite the more reserved Bridges.

It’s very notable that these weren’t the types of people who were traditionally the heroes of movies, especially not in the early 1990s. This was a time of the crack epidemic — not evidenced, it’s fair to say, by the movie itself — and skyrocketing crime in New York City. Half the jokes on David Letterman’s show, around that time, were about how dirty, disgusting and dangerous New York was. The Central Park Jogger case was just two years earlier.

There certainly wasn’t a great deal of cultural sympathy at the time for homeless people, especially those thought to be somehow mentally ill. Rudy Giuliani would ride fear of such people, among other people, to New York’s mayoralty two years later.

Gilliam himself would re-create a similar dynamic, between one guy who’s definitely mentally ill and another who could be, with the mental institution scenes between Brad Pitt and Bruce Willis in his next film, 12 Monkeys.

The Fisher King is positioned in Gilliam’s filmography right after the 1988 flop The Adventures of Baron Munchausen, and for a film, this weird and offbeat to be made by an idiosyncratic filmmaker coming off the worst flop of his career isn’t the sort of chance taken by many studios these days. But it ended up making twice as much money as it cost.

While The Fisher King had Williams and Bridges on the poster and was mostly sold as a star vehicle, the film’s supporting cast was especially a highlight. Mercedes Ruehl, in what in some movies would add up to a thankless girlfriend role, won a Best Supporting Actress Oscar for the role (between her and Marisa Tomei in My Cousin Vinny the following year, Academy in those days couldn’t resist a Supporting Actress doing a heavy Brooklyn accent.) Michael Jeter has a memorable, scene-stealing turn as a homeless drag performer, as does Tom Waits as a disabled man who gets a monologue. Future TV perennials David Hyde Pierce and John de Lancie also pop up.

Yes, the scenes with Robin Williams courting Amanda Plummer are a tad stalker-like, and you’d think everyone, in 1991, hearing references to the Holy Grail would respond either by referencing Indiana Jones and the Last Crusade or Monty Python, even if the movie wasn’t directed by a member of Monty Python, who also directed Monty Python and the Holy Grail.

Strange and off-beat as it was, The Fisher King holds up as one of Terry Gilliam’s best films.

Diamonds are Forever is Void of Any Charm