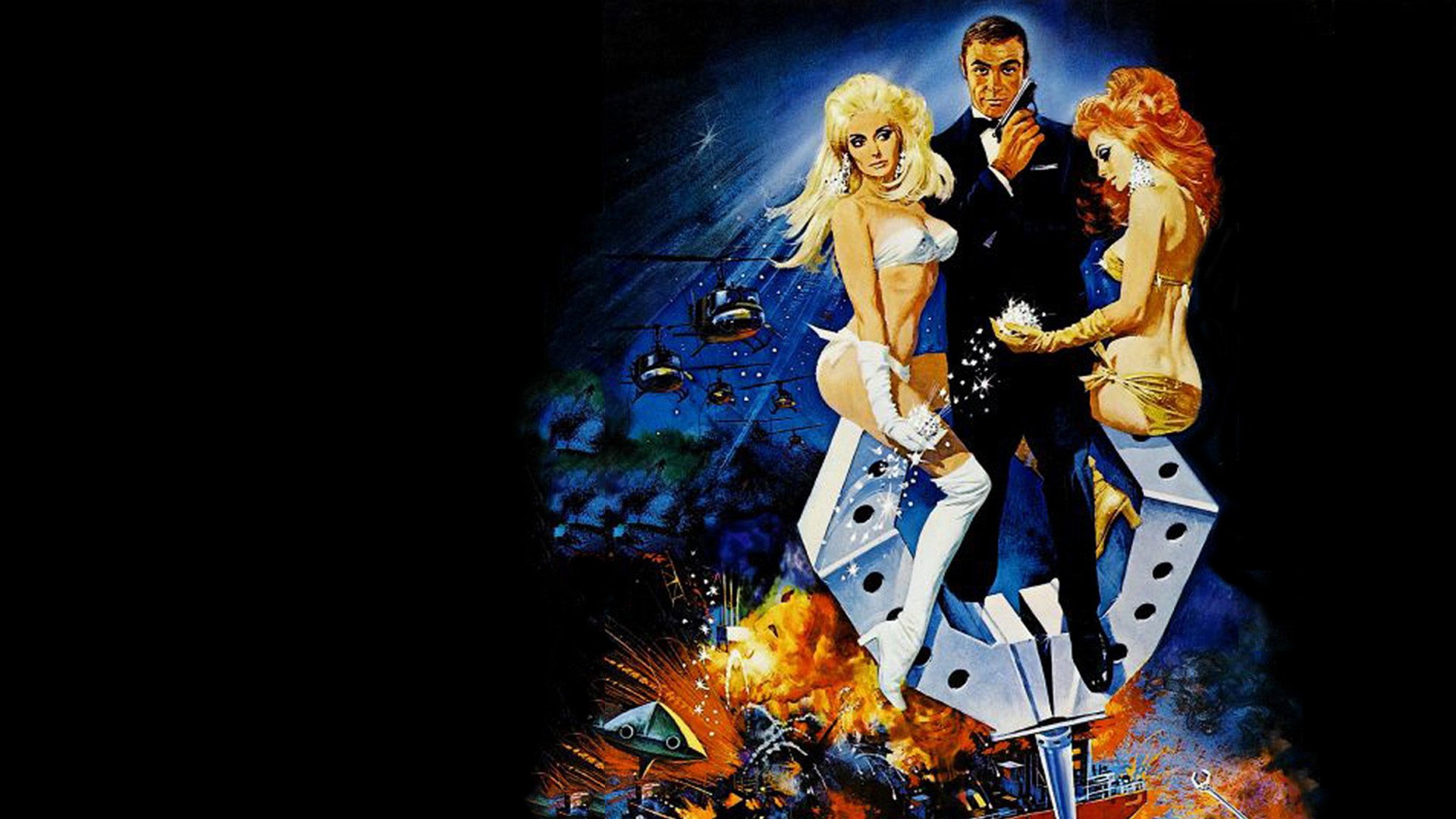 Following up On Her Majesty’s Secret Service, widely considered by most fans to be the best Bond incarnation pre-reboot, here the series takes a step back to recast the iconic Sean Connery in the role of mischievous misogynist Jimmy B, and promptly trips over itself in a strangely crass and dull outing. Replacing the wooden George Lazenby with the series’ original super spy proves to be mere consolation rather than icing on the cake bomb.

Diamonds are Forever surprisingly started with direct continuity, with Bond leading a ruthless and fisticuffs laden hunt across the world for wife killer Ernst Stavros Blofeld (played here by Charles Gray). He eventually tracks down the evil mastermind and gives him a searing exit to proceedings, or so it seems. Getting back to the small matter of his day job and saving the world in a tuxedo once more, Bond is sent to the states to infiltrate a diamond smuggling operation run by the reclusive Willard Whyte (Jimmy Dean). Along the way, he crosses paths with gorgeous double-crosser Tiffany Case (Jill St. John), a pair of creepy assassins with a droll sense of humor, and uncovers a plot to hold the world ransom with a space laser.

As pointed out by Bond quite early on, illegal jewel exporting is a pretty mundane area for 007 to cover, and even when the curtain is dragged down to reveal much greater forces at work, the action somehow doesn’t pick up. The somewhat convoluted and overly pantomime plot may fit in well with the series, but a growing sense of tedium at aimless inactivity between set pieces most certainly does not. When people do start running around, it quickly devolves into farce without the entertainment, Guy Hamilton’s uninspired and occasionally confusing direction instead meaning that the film maintains the trademark silliness without retaining any kind of thrills.

He’s not helped by a hokey script, with characters spouting drivel lines of dialogue and far too much time dedicated to pointless moments of comic relief that are neither charming nor funny, instead just plain stupid. The sight of ultimate Bond villain Blofeld in drag for no apparent reason is mercifully brief, though no less embarrassing while the hero’s only real contribution to the big final battle is slapstick fare operating the controls of a crane. It might not be at quite the same levels of absurdity seen in Roger Moore’s outings but pushes it pretty close.

Back in the role that made him a world-famous name, Sean Connery clearly wishes he was somewhere else, and only seems to get any relish out of numerous flirty double entendres, otherwise putting in a dull performance in keeping with the rest of the piece. Jill St. John certainly provides eye candy as primary Bond girl Tiffany Case, but the scripting and the actress’s labored work means she’s only sexy by appearance, and far from dangerous. Considering her position as a diamond runner, one might expect much fun from a seductive femme fatale figure, but instead, we get something more vacuously.

Then there’s the second Bond girl, Plenty O’Toole, whose name is the thing that most people will take of this film. She does nothing but swoon and then winds up dead, again for reasons mostly unclear. The villains on display are dull, even the infamous Blofeld who lacks any kind of screen presence and is indulged by a body double plot device which ultimately goes nowhere other than providing a suitable twist at the halfway point. The exceptions are Mr. Kidd (Putter Smith) and Mr. Witt (Bruce Glover), who seem like vaguely interesting antagonists until they all but disappear from the story once the real big bad has emerged. Their eventual send-off is somehow both over the top and boring.

In fact, sadly, this is the phrase that probably best sums up Diamonds are Forever in five simple words. There are only a couple of moments of genuine entertainment throughout, and one of them, Bond trapped in a burning coffin, is deflated by a quick cop-out. Otherwise, it’s a mostly action-free, ponderous, and unfocused rough cut of a film that has no momentum, amiability, or soul to speak of. The sudden emphasis on comedy may have been an ill-guided effort to compensate for the dark ending to its predecessor, but it’s to the film’s detriment. The jokes get no laughs, the action disturbs no pulses and Connery woos no affection with his dull performance.

While it strives to be a funny and entertaining comeback for the original Bond, it instead emerges as a charmless damp squib. Bond may not still be in mourning in this film, but the mood is still that of a wake. Without the laughs, of course…

30 Years Ago: Terry Gilliam’s The Fisher King Changed the Movie Definition of “Crazy”

TIFF 2021: The Eyes of Tammy Faye Shares the Scandal Figure’s Side of the Story