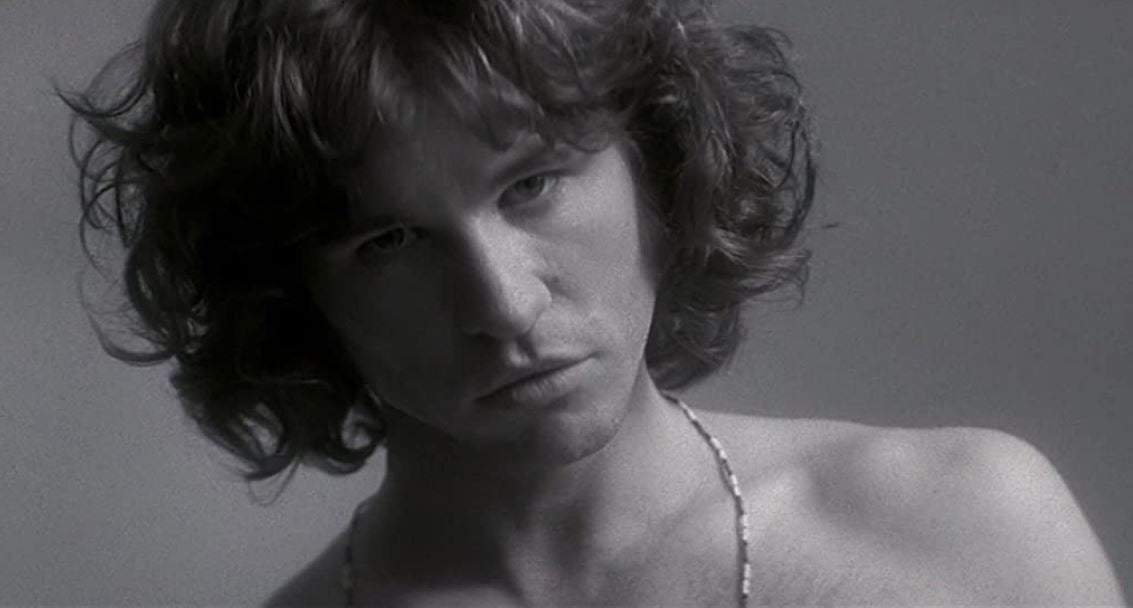 There’s a lot that jumps out, 30 years on, rewatching The Doors, which was released March 1, 1991. For one thing, it’s an unbelievably druggy movie, even by the standards of musician biopics. Sure, The United States vs. Billie Holiday had a lot of heroin in it, but drugs didn’t permeate its essence the way The Doors did.

It also features the best performance of Val Kilmer’s career and one of the better turns in any rock star biopic. The actor both looks and sounds incredibly like Jim Morrison.

In telling the story of that particular band, and its leader Jim Morrison, the film very much straddled the way the 1960s counterculture bled into a lot of the less fortunate stuff that came along in the ’70s.

The Doors was very much of a piece with the sort of nostalgia from the late ’60s that was prevalent in the popular culture of the early ’90s, mostly as baby boomers like Stone came of age and took over the culture. That’s very much less the case today- and also, it would appear that Jim Morrison has fallen a bit in the pantheon of dead rock stars from that period. The Doors’ classic rock airplay, for instance, has declined noticeably from what it was in the 1990s- and so, for that matter, has Oliver Stone’s career.

But there’s another thing that’s clear upon a rewatch of the movie. Jim Morrison, from what we see of him, was kind of full of shit. Sure, he was undoubtedly a talented and charismatic performer, and his music was great. But most of his pronouncements, either on or off stage, were grandiose, drug-addled gobbledegook. I went to college with lots of people, in the ’90s, who had posters of Jim Morrison on their walls, some even of his mugshot from when he was arrested for indecent exposure in Miami (as seen in the film.) But looking back now? The ’60s were a different time, man.

Stone’s film follows some conventions of rock biopics while eschewing others. The film begins with a young Morrison stumbling upon a dying American Indian in the desert, in a bit that Wayne’s World 2 would lift nearly verbatim a couple of years later.

We see Morrison meeting his bandmates Ray Manzarak (Kyle MacLachlan), John Densmore (Kevin Dillon) and Robby Krieger (Frank Whaley.) We see the band’s rise to fame, Morrison’s notorious on-stage antics, and his run-ins with well-known people, including Andy Warhol (Crispin Glover, playing one of the better of the many movie Warhols.)

This isn’t one of those biopics where the protagonist discovers drugs and follows them downhill; while things certainly get worse for Morrison as time goes on, we don’t see him sober much. The Doors also follows his love affairs with longtime girlfriend Pamela Courson (Meg Ryan) and rock journalist Patricia Kennealy (Kathleen Quinlan.)

But the film does great things with The Doors’ music, despite not having a ton to say about the group’s musicianship. In the stage scenes, famously, Kilmer did his own singing, while the songs that aren’t sung are played on the soundtrack throughout other scenes. Stone also made fine use of The Doors song “The End,” which is heavily associated with a different film, Apocalypse Now.

Stone made the film when he was at the height of his powers and influence, having made Born on the Fourth of July in 1989; JFK would be released just nine months after The Doors. The Morrison film was criticized at the time for taking some liberties with the historical record, but compared to JFK it’s practically a documentary.

The Doors, which just arrived on HBO Max in correlation with the 30th anniversary, is a fine time capsule of the counterculture’s height, and also of the way that culture was approached 30 years later.

Berlinale 2021: The Great Gifts of Hong Sangsoo Need no Introduction