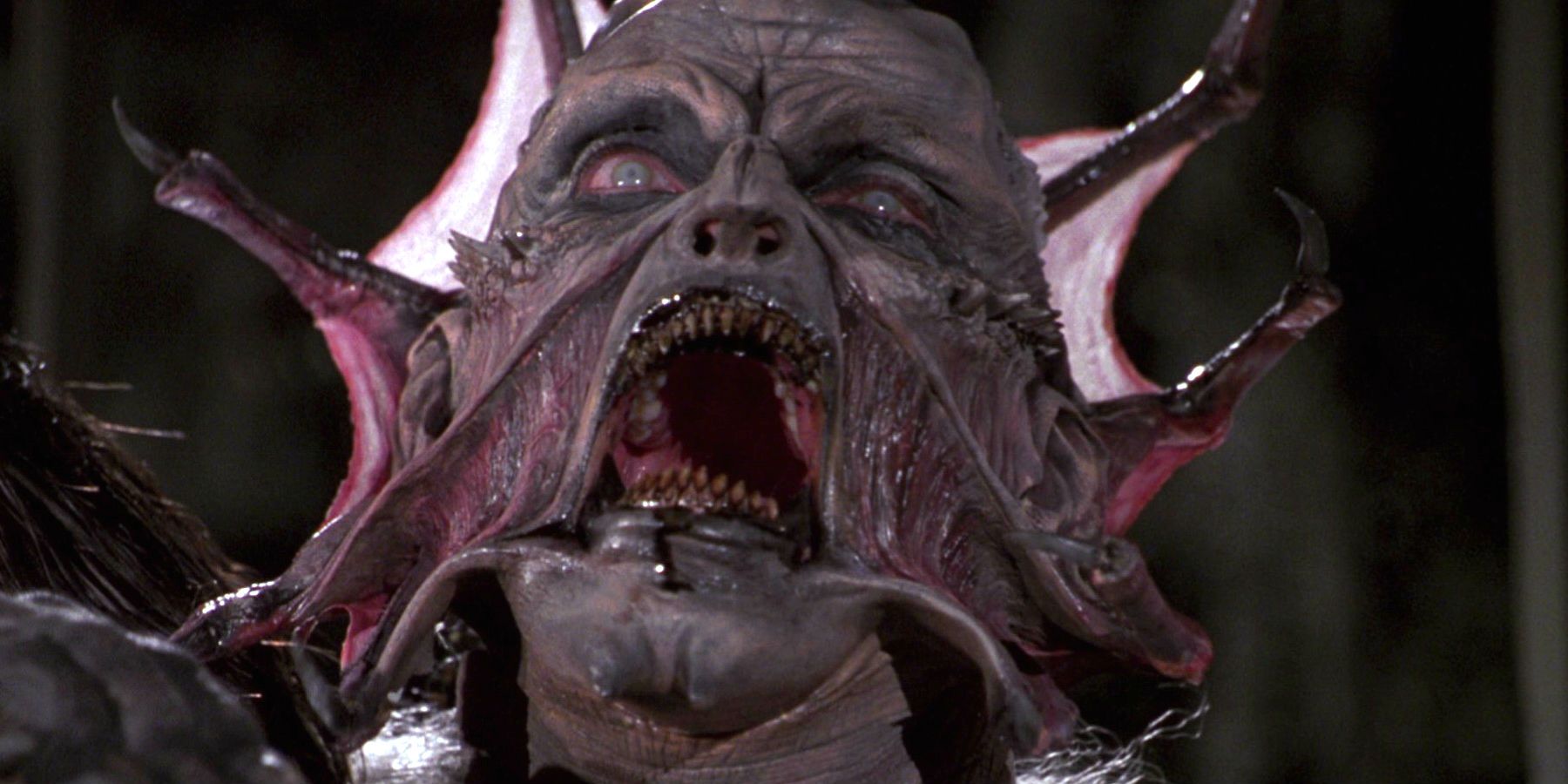 Monster movies and slasher flicks are among the most staid and predictable subgenres of the horror sphere. It takes a lot for one to stand out and really make a mark on the viewer in this day and age. Two decades ago, though, Jeepers Creepers came along and brought about some surprising twists and turns that turned both subgenres on their heads.

While it begins as a road movie with a stalker hook, Jeepers Creepers’ smart script jettisons past this opening premise to become so much more over its runtime. Starting with two siblings (Justin Long and Gina Phillips) being menaced by an old, rusty van on the highway, the story gets much more bizarre and unsettling when they stumble across an old church where the van is later parked.

This early scene is among the best in the movie, particularly a shot that pans up to show the ceiling as Darry sets down his flashlight. As dozens of bodies are shown to be congealed to the top of the room, it becomes immediately clear that whoever this trenchcoat-wearing stranger is, he’s much more dangerous than anyone could possibly imagine. A writhing man in a burlap sack with some missing organs only compounds this horrifying truth.

The steady evolution of its premise is what makes Jeepers Creepers such an original take on its respective horror tropes. For the first half of the movie, we don’t see the hands or face of The Creeper, leading us to think he’s only a very twisted man indulging in his dark proclivities. However, as the film progresses, claws, wings, and fangs slowly emerge from him, confirming our growing suspicions that he’s much more than a man.

The introduction of a psychic, Jezelle, to the mix, complicates things further. As she emanates ominous warnings to Darry and Trish throughout their frightful odyssey, they begin to look out for the eponymous song “Jeepers Creepers” as Jezelle warns them, “that song means trouble for you!” What makes this addition especially fun is that there are many versions of the song utilized and that they don’t begin playing at the chorus, so the characters often don’t notice the song until the bad event is already in the midst of happening.

Another ace up the sleeve of Jeepers Creepers is the design of The Creeper. As violent encounters with Darry and Trish begin to strip away his ability to disguise himself, his humanoid persona falls away, and we are left with something akin to a primeval demon. Part gargoyle and part swamp creature, the terrifying look of the monster reaches its zenith in the final minutes of the film when its face folds away and splits off like the dilophosaurus in Jurassic Park as it lets out a blood-curdling shriek.

It’s also the strangely arbitrary rules by which The Creeper must operate that make him such a fascinating creature. Though he sleeps for 23 years at a time, he gets to feed every 23rd spring for 23 days. What does he eat? Well, as Jezelle puts it: “You know what he eats, and don’t you make me tell ya!” To be more clear, he eats people, obviously, as his cheeky license plate advertises, but as the man from the church with the missing organs can attest, it’s a mite more complicated than that.

Figuring out the creature’s motivations and what it’s after provides much of the suspense of Jeepers Creepers. The neat thing is, even when you do know all the rules; you still don’t know which of the siblings he wants and what he hopes to consume from them until the chilling final frame when it all comes together as the screams of the dying fade away in an abandoned warehouse.

The growing tone of dread that precludes this final revelation is what makes Jeepers Creepers so effective but it’s this shocking conclusion that pays off those inklings of uncertainty and leaves the viewer haunted as the credits roll. Ultimately, whether exploring the awful true story that inspired it or the simple yet ingenious premise that powers the film, it’s the sum of its parts that makes Jeepers Creepers such an original and memorable horror picture