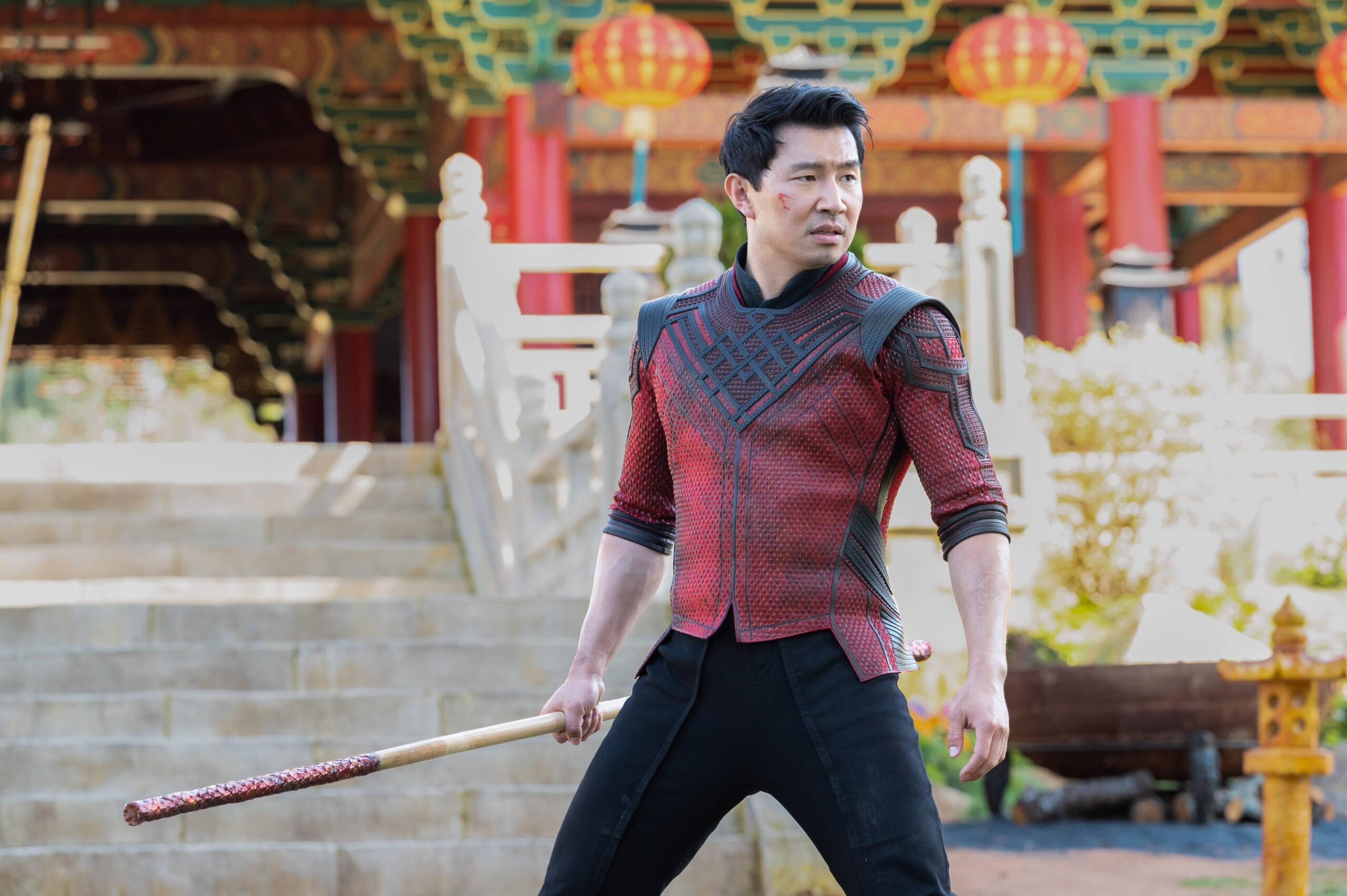 Shang-Chi (Simu Liu) in Marvel Studios' SHANG-CHI AND THE LEGEND OF THE TEN RINGS. Photo by Jasin Boland. ©Marvel Studios 2021.

Shang-Chi and the Legend of the Ten Rings Review

In the first beats of the film, it becomes abundantly clear Shang-Chi and the Legend of the Ten Rings is something special.

This action fantasy never strays too far from the franchise’s winning formula. The friendly banter, vengeful villains, and final boss battle offer comfort to returning fans, as if to say, “relax, you’re home.” However, with capable hands, Shang-Chi remolds the Marvel formula in its image.

Shang-Chi reimagines the superhero blockbuster through the lens of a new, more diverse, generation and what immerges is a story better in every respect. The script focuses on its characters through most of the film, shaping comedic-leaning dialogue, beautifully choreographed conflict, and strained dynamics into a relatable tale of family and grief.

Introducing us to Marvel Studio’s first Asian superhero movie proves to be the first time this franchise has offered us a story with such a tangible heartbeat.

At the heart of Shang-Chi is a roster of well-written superheroes.

Shang-Chi owes its cast a great deal of its success for the expertise they demonstrate in bringing these characters to life. Each performer brings a unique charisma and passion to their role, allowing the heavier family drama to flourish in their presence.

No one more so than Simu Liu, whose love for Shang-Chi and desire to be a part of this project comes across on screen in droves of unspoken likeability.

There’s a grounded everyday-hero aspect to Shang-Chi that is ridiculously enthralling and has everything to do with the man playing him. It is clear Liu is having a blast in this role, and that enthusiasm is contagious. There is no effortlessness to the victories of this film. The training and the demanding physicality of this role is mirrored in his character’s struggles.

When a hero is already notable, the villain has to leave an impression, and legendary Asian cinema actor Tony Leung is more than qualified to deliver. His portrayal of the Mandarin is a rare kind of success. He has that air of unflinching authority that commands our attention, yet he is no titular mustache-twirling villain. Wenwu is grounded in his grief and consumed by desperation to reunite with the love of his life.

To have a villain who is so incredibly powerful reduced to a broken father figure is tantalizing as Leung carries out his sympathy of heinous acts with a haunting misery we cannot shake.

It is refreshing to have a superhero film devote itself entirely to furthering the experience of its characters rather than their mantle or franchise. It has taken many projects to know our favourite Marvel heroes. Yet, Shang-Chi uses much of its dialogue to expose who these people are at their core, from backstories to fatal flaws to the futures they desire.

The outstanding soundtrack accompanies each scene with emotion backtracking and finds those moments to draw attention to the protagonist’s thought process. Even the frequent use of Mandarin dialogue and subtitles helps give its characters an experience authentic to them. Audiences should learn to grow accustomed to details like this as it makes more sense for the characters to speak in their native languages when the scene calls for it.

The fight scenes that pepper this premise are unlike anything Marvel is capable of. The choreography is a masterpiece, using the entire space to highlight the beauty of martial arts on the big screen with sequences that are nearly cut-away free. The fighting style introduces the MCU to a form of smarter, conflict-driven storytelling.

Each fight feels like an extension of Shang-Chi’s story and often moves the characters towards an emotional revelation.

All these successes give a new generation of moviegoers the means to see the importance of Asian cinema and to appreciate what other viewpoints have to offer formulated superhero films. And with so much Asian excellence on display in this project, it’s lovely to see Shang-Chi give its female characters an equal voice in this change.

So much of the marketing of this film focuses on our protagonist, Shang-Chi, but Awkwafina’s Katy and Meng’er Zhang’s Xialing stand by his side the entire journey as equal participants. Xialing is allowed her own training montages and growth. Everything from her backstory to her blunt bob is exquisite, subtle commentary on the evolution of women in cinema. The reveal she will return as the leader of the Ten Rings is icing on top for this flourishing character.

Shang-Chi introduces several refreshing themes throughout this film, but none are quite as poignant as its devotion to family. Family fuels Shang-Chi’s hero journey. Family is not a mere sentiment thrown around as decoration this time; it is the core of the conflict and the root of our villain’s motivation. Family is Shang-Chi’s greatest antagonist and triumph thanks to powerful notes of obsession and desperation.

That is why beginning this film with a love story is something so incredibly unique and powerful.

Wenwu and Li’s first meeting effortlessly establishes the foundation of the film in an alluring battle of wits and magic. Their confrontation at the entrance to Ta Lo is one of the more gorgeous opening sequences of the Marvel Cinematic Universe. It is an introduction that expertly establishes just how outstanding the cinematography and martial arts-based fighting style will be throughout this journey. The conflicting nature of Wenwu and Li’s powers is an eloquent way to introduce these two as opposing forces for their children.

What comes next is a powerful study of grief that utilizes the father-son dynamic between Shang-Chi and Wenwu brilliantly.

Focusing on family and loss is a risky but rewarding move for the blockbuster. Birthing a new villain out of all-consuming grief allows for rich character-driven stakes to evolve in the capable hands of Leung.

Even so, the commentary Shang-Chi makes on grief is gratifying; that Wenwu would be so incapable of processing his wife’s death, he would let the past utterly consume him until he could no longer see a future beyond that pain. He blames his children for running when they were desperate to escape his toxic grief before it consumed them too. It is all rather potent for a superhero film, but Marvel seems to be embracing grief these days with projects like What If…? and WandaVision.

Shang-Chi does lose some of its magic as Leung exits and the film approaches the final sequence of its big boss battle. This massive CGI smorgasbord of flying demons and magical dragon-scaled weapons is steeped in rich Chinese mythology and introduces actual dragons to the MCU. In many respects, it is the fantastical ending this premise calls for.

That said, this showdown between Ta Lo and these otherworldly creatures feels the closest to Marvel’s traditional superhero formula as the final battle overwhelms its characters with hordes of CGI conflict. It has become incredibly frustrating to witness these blockbuster films so grounded in character dynamics become all but consumed in the final act by big-budget special effects and green screen battles.

These showdowns have become a staple of the genre and the main antithesis of weaker superhero projects. However, Shang-Chi manages to circle back to the conflict that counts by throwing a noble exchange between Shang-Chi and his sister and capping off the gigantic-creature fight with a beautiful lantern tribute to the fallen.

In a pattern that aids this action movie, this action-adventure refuses to take these twenty-something superheroes too seriously. The decision to skip much of the post-battle debrief and go straight to Shang-Chi and Katy’s summary of the more ridiculous parts of their week is a fun tongue-in-cheek moment for the film.

As if to acknowledge that yes, they fought giant special-effects monsters in the sky, but they immediately made fun of it, so it is time to move on.

The hope is that films like Shang-Chi will not always have to carry the weight of these firsts for Asian representation. Despite overwhelming pressure to be the ceiling-breaker, this film stands as a thoughtful exploration of grief and love for all those reckoning with identity.

Shang-Chi is an intricate ballet of perseverance and emotional complexity at its deepest and, at its most honest, an entertaining comedy about two twenty-year-olds who are as lost as the rest of us. From Sir Ben Kingsley going full Trevor Slattery to the art of Katy’s “Hotel California” yelling, this film lays into the fact that none of these people have their life together, and that is okay — it will make for great comedy.

Shang-Chi and the Legend of the Ten Rings masters the art of the Marvel film with its abondance of humour, heart, and heroics.

For those that are hard-pressed to come out of the theatre dissatisfied with the film’s choice to deviate from the typical superhero blockbuster, know this is not for you — Shang-Chi is truly a love letter to its Asian heritage. But the stunning cinematography and character-driven conflict of this origin story is something all moviegoers can and should embrace.