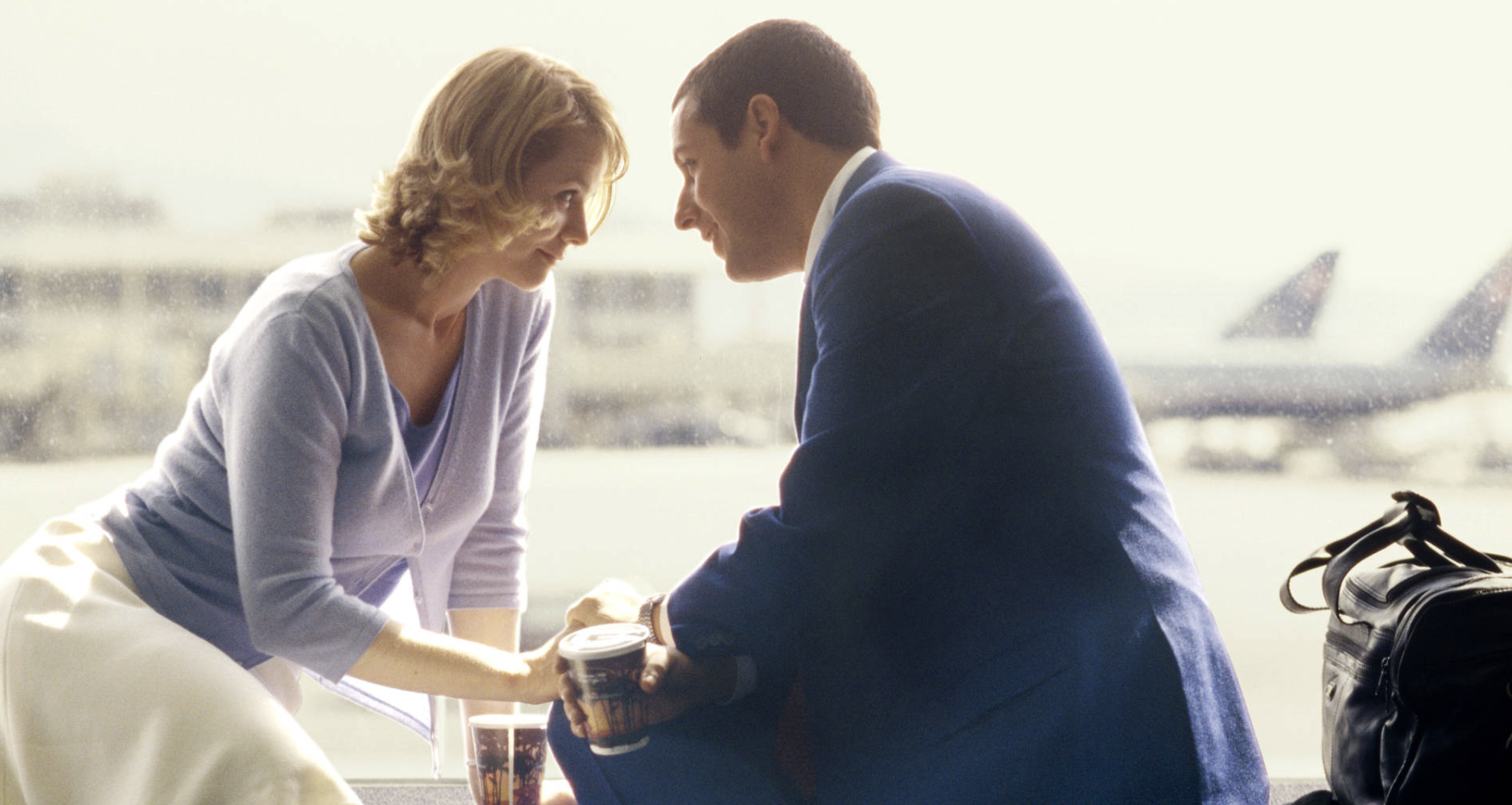 It’s not exactly a surprising thing anymore for Adam Sandler to get away from the broad comedies with which he’s long been synonymous and take on a starring dramatic role, with an auteur director.

But the first time he did that was in 2002’s Punch-Drunk Love, in which Sandler teamed up with Paul Thomas Anderson. There’s also no overestimating how jarring it was at the time for Sandler to appear in a film like this- not only a non-comedy but something with such a weird, unconventional tone and pace. The film arrived 20 years ago, opening in small markets in early October of 2022 and going into wide release in November.

Punch-Drunk Love is a character study, about a strange man getting into some strange adventures. Sandler, in the film, plays Barry Egan, a depressed and lonely man in his 30s, frequently badgered and insulted by his large gaggle of sisters. They’re overbearing and express concern, while at the same time often viciously insulting him.

In addition, he’s trying to exploit a loophole in a pudding promotion in order to earn unlimited frequent flier miles, and at the same time, he’s being extorted by a phone sex line company. This was based on a true story of a guy who really did that.

Yes, he’ll fly into the occasional rage, just like Sandler often did (and does) in his comedies. But Barry is a very different animal, for sure.  Punctuating it all, Sandler spends the entire running time of the movie wearing a loud electric blue suit, as an unconventionally jaunty score by Jon Brion plays.

The film mostly follows Barry’s attempts to escape his loneliness through a budding romance with Lena (Emily Watson.) And this is perhaps the most moving thing in the movie: It’s the story of a strange guy who manages to find a woman who’s on that exact same wavelength.

This gets complicated when henchmen of the phone sex boss (Philip Seymour Hoffman) get rough with him, but things thankfully end happily. But his new relationship gives Barry a confidence he’d been lacking before.

“I have a love in my life,” he says at one point. “It makes me stronger than anything you can imagine.”

In Anderson’s filmography, Punch-Drunk Love came fourth, three years after Magnolia and five years before There Will Be Blood. Punch-Drunk Love is also, at 95 minutes, the shortest film Anderson has made by a significant margin. Anderson was said to have wanted to make a shorter film after the lengthy Boogie Nights and Magnolia.

Anderson once said in an interview that he was motivated to create Sandler’s character by “The Denise Show” sketch on Saturday Night Live, featuring Sandler pining over an ex-girlfriend and getting angry.

Sandler and Anderson never worked together again, and while the director is known for working with a consistent company of actors, he was also one-and-done with Mark Wahlberg and Tom Cruise, in addition to Sandler.

In his Punch-Drunk Love performance, Sandler showed that he was capable of something very different. And while the actor has continued to frequently make silly comedies, mostly for Netflix these days, he has also occasionally done acclaimed work, most recently the Safdie brothers’ 2019 Uncut Gems, and in this year’s Hustle, a crowd-pleasing basketball movie in which he played a scout.

Punch-Drunk Love is among the best movies Adam Sandler has ever starred in. I wouldn’t put it that high in Anderson’s filmography, as I’d rank Boogie Nights, Inherent Vice, Licorice Pizza, and Magnolia higher, although I’d put it after those.

At any rate, Punch-Drunk Love is now streaming online.