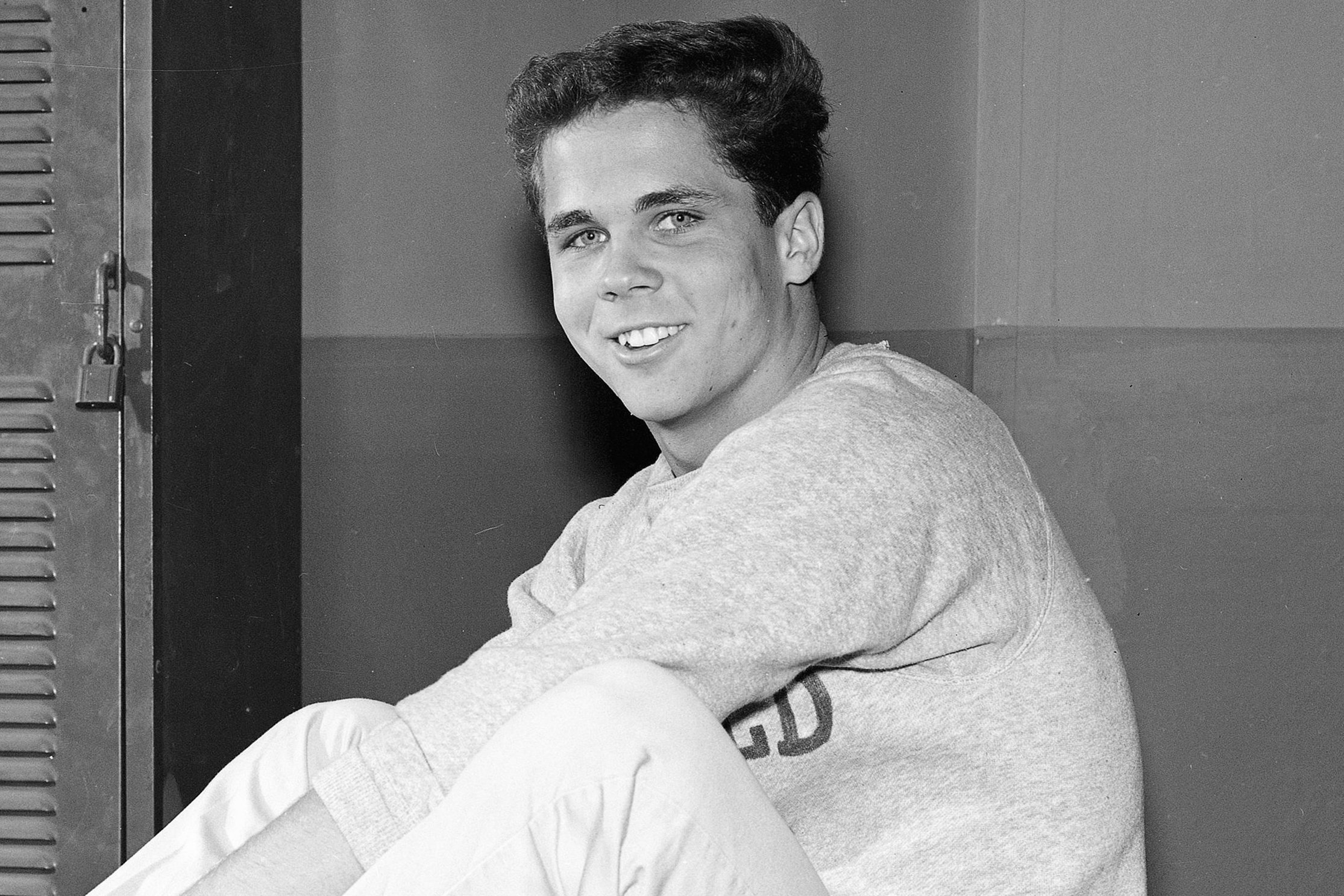 He wasn’t a Ray Liotta or a James Caan, he wasn’t a Paul Sorvino, he wasn’t even a Bo Hopkins, so – and saying this with all respect – there’s not a lot to say about the passing of Tony Dow.  He successfully managed to survive child stardom – no mean feat – and went on to guest appearances on quite a few TV series while also having another kind of life:  working in construction, studying journalism, becoming a respected sculptor, getting into directing, producing, even FX work.

For my part, mostly I’d see him here and there talking about the ’50s and the show with which he’s most closely associated:  Leave It to Beaver which had a successful 1957 – 1963 run.  When he talked about those days, he spoke about them articulately with insight and good humor.  And he wasn’t above taking a gentle poke at his own image, showing up in the parody flick Kentucky Fried Movie (1977) as his Beaver character, Wally, with one of the Zucker brothers as The Beaver, and then on Saturday Night Live in 1980 with his Beaver costar Gerry Mathers with both taking the same good-humored shots at their scrubbed-clean sitcom image.

Here’s the thing:  he was not a major entertainment figure, Leave It to Beaver was about as substantial as a bowl of cotton candy, but Mr. Dow’s passing still gives me pause for thought.  Leave It to Beaver, despite its insubstantiality, became a cultural touchstone, an icon of an age, one of a strain of equally flyweight TV sitcoms from the era that have, ironically, had some long-term negative consequences.

I’ve always tried to avoid getting political here, and I’m going to try not to wade too far into that bog, but it seems in recent years that there’s a fair bit of the population which thinks of that Leave It to Beaver image of America nostalgically and is pushing hard for a return to those days.

But here’s another thing:  that America never existed.  It wasn’t true then.  Never was.  When I hear this stuff, I shake my head because it’s nostalgia for a fantasy.

There was a whole string of them along with Leave It to Beaver:  Father Knows Best, The Donna Reed Show, The Adventures of Ozzie and Harriett, Dennis the Menace, Room for One More, The Patty Duke Show… (a slightly different spin but keeping the same tone were single dad shows like Bachelor Father and Family Affair; curiously, there were no single moms).

The dads never had a job requiring them to carry a lunchbox (actually, I’m not even sure I know what they all did for a living), they never wore jeans or sneakers even on weekends, and were always a font of problem-solving parental wisdom.  The moms never had jobs, were always impeccably turned out in dresses and pearls and high heels (even when they were puttering around the kitchen), and their parental wisdom was usually, “Wait until your father gets home!”  And the kids?  Nobody ever got knocked up, busted by the cops, talked back to their parents, in fact, they were pretty good kids even when they were in trouble.  And the families lived in grand, stately homes which today would be classified as mini-mansions, set in quiet suburbs; not the shoulder-to-shoulder boxy little Cape Cods born of Levittown and the other new commuter ’burbs that, postwar, were springing up like mushrooms after a rain.  These TV families didn’t have to count pennies, never worried about bills, ironically they didn’t watch much TV (Dad’s diversion usually seemed to be reading the evening newspaper).  The dads liked their jobs, the moms seemed to be content to stay at home and bake.

It was also a world that was almost completely racially homogenous, which is a nice way of saying it was really, really white.  Oh, there were Asian servants (Bachelor Father), and Black servants (Beulah), and, if you went rural or Old West, you could find Latinos (The Real McCoys)…but they’d never be a neighbor in those lily-white, picket-fenced suburbs.

Sure, there were other shows that were a bit more blue-collar, a bit rougher around the edges, like the unjustly forgotten The Life of Riley which starred William Bendix as a modest-living riveter who was kind of a prototype Homer Simpson, and, of course, The Honeymooners, which was practically grim in its portrayal of thwarted dreams and life in a barely-furnished, two-room tenement apartment.  And if you wanted a more honest – yet comic – picture of teen angst, you couldn’t beat The Many Loves of Dobie Gillis, with Dobie’s dad running a small grocery store, and, in a touch of the surreal, Dobie philosophizing to the camera about his typical (for the time) adolescent dilemmas in the company of a replica of Rodin’s “The Thinker.”  Yet, with the exception of The Honeymooners, the picture of 1950s America that seems to persist in the cultural memory is that Beaver/Donna Reed/Father Knows Best-wise-dad-pert-mom-no-minorities-allowed vision that was as detached from reality (then and now) as Captain Video and his Video Rangers.

That image of 1950s prosperity was partly true, but it only existed because, after the ravages of WW II in Europe and Asia, the U.S. had the only intact economy and industrial base left in the western world.  And, if you lived in rural America, Black America, Latino America – in fact, any America that wasn’t white and Christian and metropolitan – you weren’t sharing in that prosperity.  Actually, even if you were a white, Christian woman, you were only sharing by proxy as your well-being was totally dependent on your husband.

Presenting a minority as just another unexceptional human being was tough to get past network programmers who seemed to be of the opinion that since most of the country was white, all of their programming needed to be white-centric.  Bill Persky, one of the writers on The Dick Van Dyke Show, told me the story behind an episode he wrote with his partner, Sam Denoff – “That’s My Boy??” – where Van Dyke’s character is convinced the baby he and his wife brought home from the hospital is the wrong baby.  The punchline is when the other dad Van Dyke thinks has his kid shows up, he opens the door and its Black actor Greg Morris.

CBS didn’t want to run the episode.  Somehow they thought in that era of Civil Rights marches it was going to cause some sort of racial uproar.  The only reason the episode ran is series creator Carl Reiner threatened to go to the press with the story of how the network had chickened out.

That same year – 1963 — producer Joseph Stefano was fighting with ABC over including Black actor Hari Rhodes as a minor character in an episode of the sci-fi anthology The Outer Limits.  Network execs objected because the script didn’t specify that the character was Black.  Stefano grabbed the script, penned in the word “Black” as his kind of “Fuck you” to the network and Rhodes was cast.

For some, a Leave It to Beaver is food for parody and satire (watching an episode today, it almost seems to border on camp), because of its outrageously idealistic view of the ideal family and its ideal members.  We laugh because it hits us in a way that ranges from, “Oh, really?” to “You’ve got to be freakin’ kiddin’ me!”

But for others, especially people too young to have actually lived through those years, it’s the America they say they want back…even though it was an America that only ever existed in black and white on little square screens