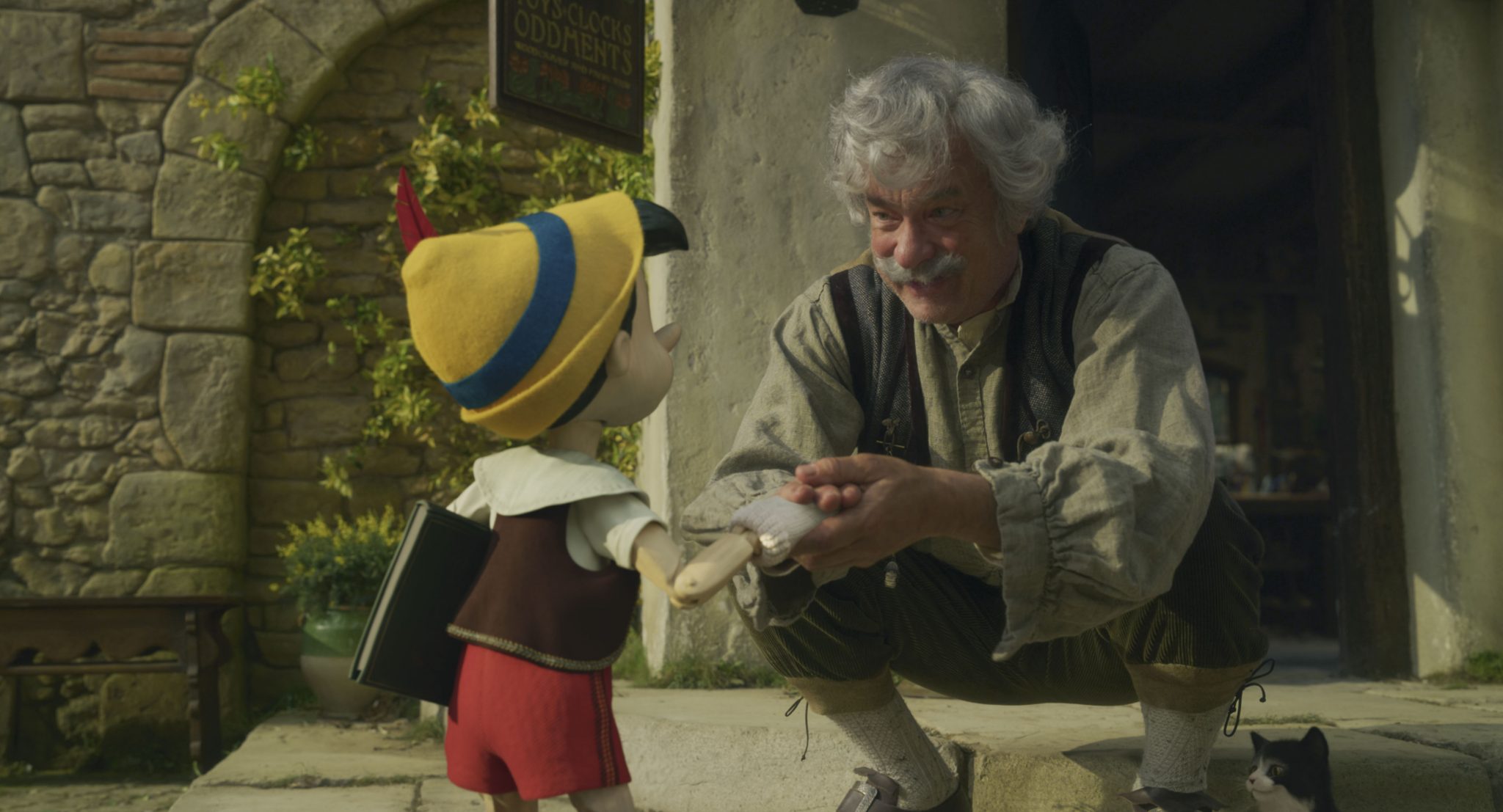 Disney has been aggressively pumping out mediocre live-action remakes of their animated classics for seven years at this point. Ever since Kenneth Branagh’s nice-but-forgettable Cinderella (2015), these soulless, unremarkable remakes have been produced at an alarming rate, each more pointless than the last. While there have been a few exceptions, the films provide very little resembling entertainment or significance, and they never really do anything to justify their existence. Pinocchio is, unfortunately, no different.

The film’s plot is almost identical to the original animated film. A woodcarver named Geppetto (Tom Hanks) carves a puppet named Pinnochio (Benjamin Evan Ainsworth) and wishes that the puppet was a real boy. In this version, it is revealed that Gepetto’s son died before the events of the film, explaining that he wants Pinocchio to be alive because he misses his dead son. After Gepetto makes his wish, The Blue Fairy (Cynthia Erivo) brings Pinnochio to life, but explains that he will never truly be a real boy unless he can prove himself “brave, unselfish and honest.”

In the 1940 film, Pinocchio departs into the world with Jiminy Cricket (Joseph Gordon-Levitt in this version), a talking cricket who has been given the task of being Pinocchio’s conscious. Pinocchio faces many temptations that lead him astray from the paths of bravery, selflessness, and honesty. After falling into danger and temptation multiple times, he eventually develops a strong moral center and grows.

In the live-action adaptation, however, this is not exactly the case. In this version of Pinocchio, the titular character never really develops morally because he never really falls to temptation in the first place. In other versions of the story, Pinocchio is tempted by the fame of an acting career and the indulgent excesses of a place called Pleasure Island. In this film, Pinocchio is a much more passive character who never knowingly chooses immoral behavior; he ends up on Pleasure Island almost by mistake, and he avoids most of the indulgences it offers because he finds them repulsive. Even when he chooses to become an actor, it is framed as being largely because he thinks it will make his father proud.

This rewriting of Pinnochio as a consistently moral golden boy who is shocked at (rather than delighted by) the temptations of Pleasure Island speaks to the film’s utter lack of depth. Rather than have a flawed character slowly learn to develop a sense of ethics, which would have been a story much more in line with how real people work, this film chooses the easier path of having an unambiguously good character simply get swept up by circumstances mostly out of his control. That Pinocchio’s goodness pretty much never wavers makes him an uninteresting protagonist; he also sets an unrealistic standard for a film that seems like it’s trying to teach kids a lesson about moral development.

Overall, there’s not much positive to say about Pinocchio. The dialogue is awkward, uninteresting, and often uncomfortable. Like most Disney films, Pinocchio tries to sneak in a few adult-friendly jokes to make the film enjoyable for all ages; however, even the adult-focused humor is mostly cringey. Whether trying to elicit laughs or sympathy, the writing in the film consistently falls flat.

The visuals are sometimes nice and sometimes cursed. While some of the CGI looks good, there are also a lot of uncanny valley moments and a few animals that seem pulled from early Pixar films like A Bug’s Life (1998). The performances are also mostly rough; Joseph Gordon-Levitt seems to be doing a bizarre Woody Allen impersonation that is completely misguided, and the film sees Tom Hanks at his absolute worst. One bright point performance-wise is Keegan-Michael Key as a fun and charismatic Honest John; in contrast to the film’s mostly forgettable or outright uncomfortable performances, Key stands out as impressive. It is also interesting that Key’s character’s animation is the only particularly impressive visual in the film.

Cynthia Erivo also holds her own as The Blue Fairy, although the script doesn’t give her much to work with. Her rendition of “When You Wish Upon a Star” is absolutely beautiful, and if there is anything positive to take away from this film it’s her stunning vocal performance. Erivo proves again why she is one of the most exciting performers currently working; even when handed a rough script, she can still make a character interesting and absolutely blow audiences away with a song.

The film also introduces a new subplot with the character of Fabiana (Kyanne Lamaya), a disabled member of the puppet troupe Pinocchio briefly joins. A dancer who uses a leg brace, Fabiana uses her marionette to act out dance moves that she can’t. Lamaya does do a good job, but the character is, like the rest of the movie, too poorly written to do much with. Her story is underdeveloped and borders on ableist: trying to use physical disability as a way to connect Pinocchio’s wooden body with Fabiana’s use of a leg brace and a puppet to perform her dance routine seems a bit misguided, and the execution is clumsy. Pinocchio also seems to think that Fabiana’s puppet is actually alive like him, a choice that can’t help but be anything but awkward.

Ultimately, Pinocchio misses the mark on too many levels. The writing is incredibly awkward, the visuals are inconsistent, and the film somehow manages to get absolutely terrible performances out of otherwise-skilled actors like Levitt and Hanks. The pacing is also so poor that even the most patient viewer will likely lose interest very quickly. It is hard to find much redeeming about the film; one can only hope that Disney will raise the bar for their much-anticipated upcoming adaptation of The Little Mermaid.