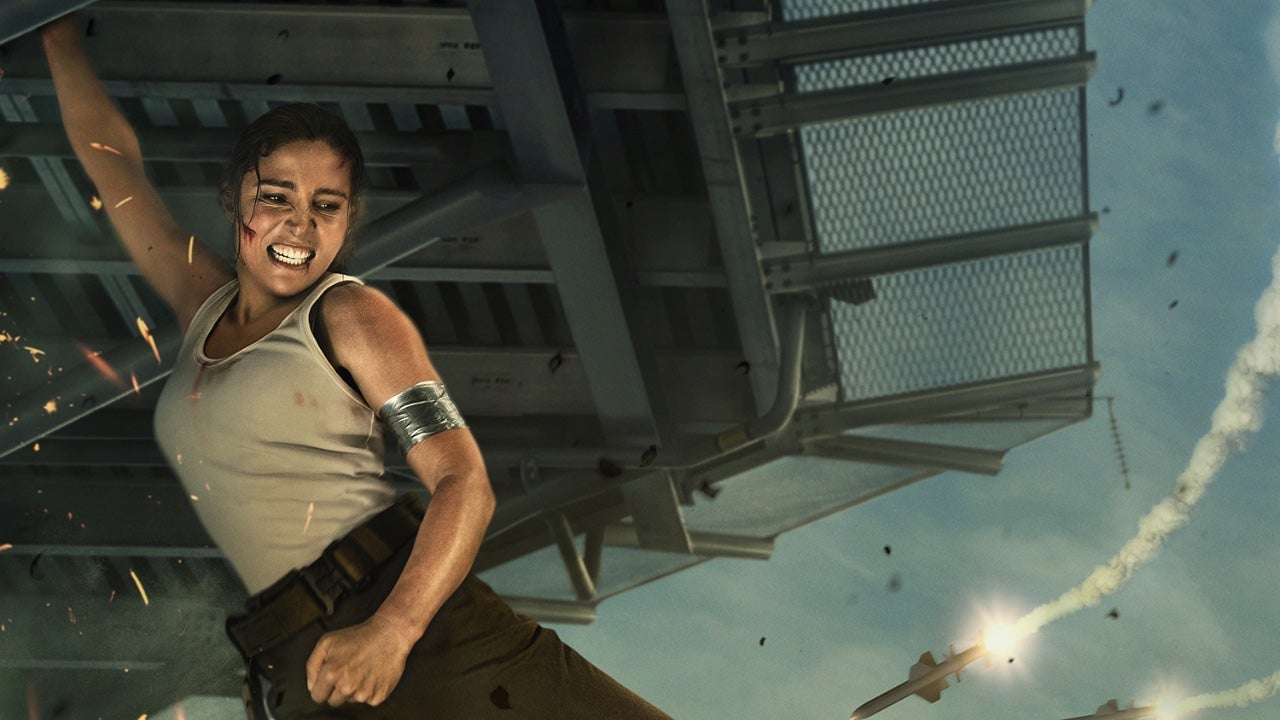 Die Hard in a building. Die Hard in an airport. Die Hard on a train. Die Hard on a plane crawling with poisonous snakes. Die Hard in a space station. When the 1988 Bruce Willis actioner exploded onto the silver screen and became a hit, few could have predicted the extent of its legacy. There is always a filmmaker ready to rinse and repeat the exercise in the hopes of catching lightning in the same bottle. Some come close, others less so. Enter Matthew Reilly with the latest Netflix movie of the week, The Interceptor.

The Interceptor in question is the name given to the United States’ ground-to-air missile defense program in the event of a foreign country launching its own projectiles. Located somewhere in the Pacific Ocean (along with a sister site in Alaska), site SBX-1 concerns itself with defending the homeland from attacks emanating from Russia. Captain JJ Collins (Elsa Pataky) is newly stationed to the Pacific platform after a controversial run-in with military higher-ups. The truth is she was the victim of abuse. Her time out in the middle of nowhere is very much to shut her up. Lo and behold, a band of terrorists led by one Alexander Kessel (Luke Bracey) takes over. Russian nuclear missiles are on their way to obliterate several major US cities. Kessel seeks to disable the station’s defense mechanism. Unfortunately for him, there’s an Interceptor on board. Rim shot.

In Pataky We Trust

No one knows how high Elsa Pataky’s stardom will rise. The future is unpredictable. She is mostly known to mainstream crowds from some of the more recent Fast and Furious entries in which she played a Brazilian law enforcement officer. The Interceptor is an attempt to break into the action blockbuster game, although it may temper her chances. The reasons are twofold. For one, Netflix releases an ungodly number of films and shows weekly. As such, new content easily gets lost in the shuffle. That’s the simple argument.

Second, the film is not especially good. Bless Pataky for getting herself into impressive shape for the role (with some help from fellow action star, and husband Chris Hemsworth). She runs all over the place, falls all over the place, hangs onto bars with a single-arm, kicks, punches, unloads clips, and tells her assailants to f*ck off. Absolutely no one who presses play on this film will question her dedication to being an incredibly tough and resilient action heroine.

That said, her commitment to the part is about the only thing the film has in its favour. Too much of the punching and kicking mentioned earlier occurs under low lighting and with odd edits. There is a contest early in the picture between JJ and a much larger human being. It happens in a corridor with restrictive space and under flashing lights. Almost every time the protagonist lands or receives a blow, that’s when the lights flip off.

The Interceptor is handicapped by many decisions, most notably with regard to the writing. Readers can roll their eyes and argue that the point of watching a film of this ilk is not to appreciate the writing. Point taken. That doesn’t mean that lazy writing can’t find a way to sink the proceedings into the depths of the Pacific Ocean. The most disappointing aspect is that writer-director Reilly and company dare to broach extremely serious topics. Sexual abuse against women, the role America plays in the world, what it means to stand up for what one believes in despite a crooked system, etc.

These are all salient talking points and ripe for exploration, even in an action movie. Unfortunately, none are handled very well here. Everything lacks imagination in execution. Of course, JJ was abused. Of course, her father’s most important lesson was to “always keep fighting”. Of course, the antagonist compares his objective to the fall of the Roman Empire. Of course just before killing one of JJ’s colleagues, heavy claims that he isn’t a murderer but rather a patriot. The list of transgressions extends but these are spoiler-sensitive times. Spoilers for The Interceptor? One supposes.

If there is anything about the film that might satisfy viewers, a case could be made that it harkens back to action films of the 1980s. It was a glorious epoch for Hollywood beefcakes. Come to think of it, JJ Collins is a lot like Arnold Schwarzenegger’s roles in which he played American military personnel. The was a charm in hearing him speak with his unmissable Austrian accent. Pataky is Spanish and makes no attempts to sound American. There are some cheesy one-liners and comical side characters (including one played by her husband). If simply echoing the spirit of 80s flicks is good enough because those were the be-all and end-all of action movies, so be it. Have fun.

Pataky is dedicated, that much is obvious. Hopefully, the next stage of her career won’t be relegated to sloppy Netflix actioners. Anyone with her moxie deserves even moderately better material. Pray this film won’t be the interceptor of future success.

Prometheus is Wildly inconsistent, But There’s Enough to Love