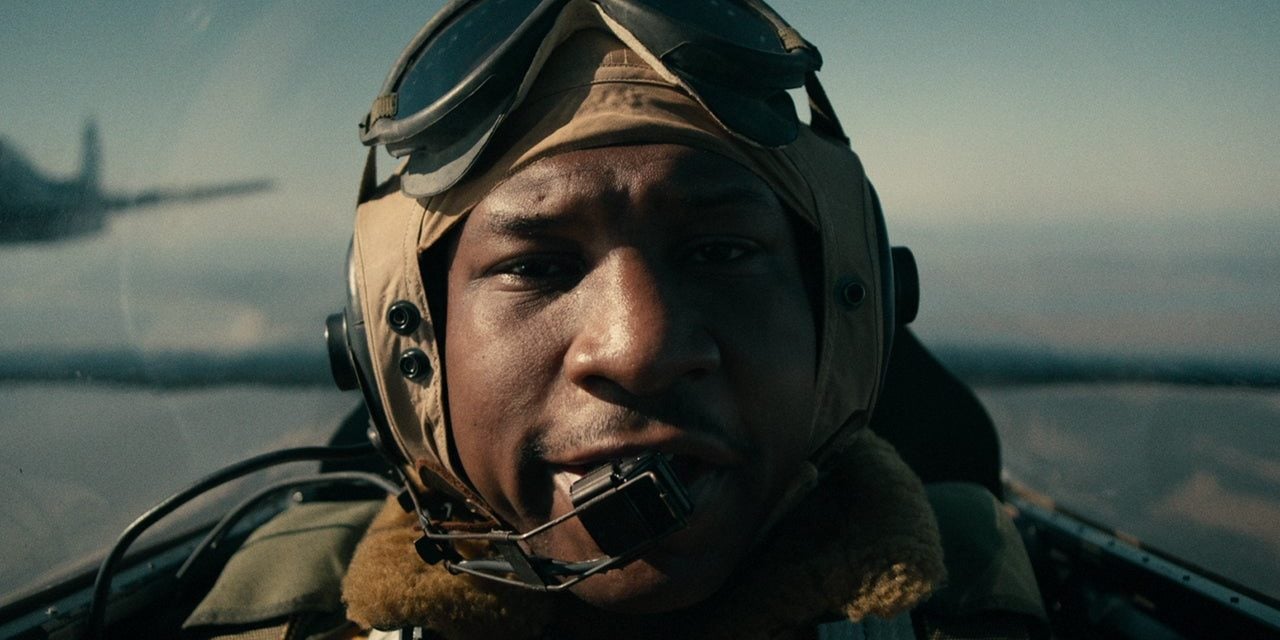 Film aficionados who pay attention to theatrical releases notice trends. Sometimes the stars align (as well as Hollywood’s lucrative attempts at cashing in on themes) for multiple films telling similar stories to come out in rapid succession. In 1998, two summer blockbusters concerned themselves with the terrifying idea of a comet crashing onto Earth, obliterating life as we know it, Deep Impact and Armageddon. In 2013, two major releases depicted terrorist attacks on the White House in Washington, D.C., Olympus Has Fallen and White House Down. Now comes Devotion, only months after the release of the year’s most successful film, Top Gun: Maverick. It too showcases the trials and tribulations of U.S. Navy fighter pilots, albeit with a vastly different tone and pace.

Adapted from a book that itself was based on a true story, this J.D. Dillard-directed Korean War era epic sheds light on two U.S. Navy pilots, Jesse Brown (Jonathan Majors) and Tom Hudner (Glen Powell, who was also in the cockpit for Top Gun this summer). Hudner is a new transferee to a Long Island military base where he and a small band of pilots train and test new planes during a chapter of post-WWII détente. In a twist (by 1950 standards), the group’s ace is Brown, an African American. This doesn’t seem to bother anyone too much within their small circle of brothers, although outside personalities don’t take kindly to Brown’s presence. The protagonists slowly begin to connect, but their newfound friendship is really put to the test when the Korean war breaks out, calling the pilots into battle.

Expectations are of the essence when watching Devotion. Director J.D. Dillard, working with a screenplay from Jake Crane and Jonathan A. Stewart, does not copy the Top Gun: Maverick template. While that may come across as a mundane, superfluous statement, the fact of the matter is that Devotion’s marketing material (not that it’s been marketed very heavily) has emphasized the action set pieces. Truth be told, Dillard’s effort is a far more touching effort, with its heart and mind invested in how people from different backgrounds come together at a time when perhaps that wasn’t people’s default position.

As a result, Devotion operates at a far more relaxed pace than its summer-time predecessor. To be sure, audiences are greeted with some brilliant aerial machinery. That said, sequences of military prowess are interspersed between intensely character-driven beats. Its stars, Jonathan Majors and Glen Powell, deliver strong if unspectacular performances. Neither portrays incredibly outspoken personalities, which makes for many quieter moments than expected considering the wartime-themed and culturally sensitive discussions they engage in. If anything, it feels different from the shouting matches and tear festivals many other pictures of this ilk embellish. One may argue it’s a notch more mature. Christina Jackson portrays Bown’s wife, Daisy, and injects the film with some of its best dramatic and most charming moments.

Give the People What They Want Too

Of course, this is an aeroplane movie and when Dillard and company deliver what presumably many moviegoers hope to receive, it’s an all-around solid experience. The filmmakers devote themselves to the technical details of the era, hence the presence of many mechanical wonders that were used during the forgotten Korean War. Skyraiders, Grumman F8F Bearcats, MiG-15s, there is plenty for military history buffs to relish in. Furthermore, the set pieces themselves are realized with technical grace and aplomb. It helps that, probably to one’s surprise, Maverick’s technical supervisor worked on the production. Billy Fox serves as editor and the technician’s efforts deserve plaudits. Action sequences are stitched together with excellent wherewithal for the geography of space, where planes are in relation to one another and vis-à-vis ground-to-air defences.

If Devotion stumbles at all, it is with how some of the racial tensions are handled. While it is refreshing to see a story set in 1950 where the inner circle of heroes thinks nothing of the presence of an African American, the depiction of people on the outside occasionally borders on cartoonish. Granted, by 2022 western standards, such behaviour probably did in fact border on cartoonish, but some scenes come off as obvious. Easy layups for the audience to sympathize with Brown. That said, Majors gives one of the most intense performances of the year in a scene that won’t be spoiled here. Suffice it to say that his character deals with racial hatred face first.

The American Thanksgiving movie release schedule is, as per usual, a busy one. Not every picture stands out. Every year a film or two are dumped into theatres, only to be overlooked and quickly forgotten. The elephant in the room is that audiences only just devoured a glorious, fighter plane showstopper. One response is that Devotion refuses to be a Top Gun: Maverick copycat. It’s a very character-focused, historically-based journey about the adventures of people coming together to fight an oft-overlooked war that left an indelible mark on 20th-century geopolitics. Just accept the film’s tone and pacing and let it take flight.

All That Breathes Finds New Lyrical Ties to the Natural World