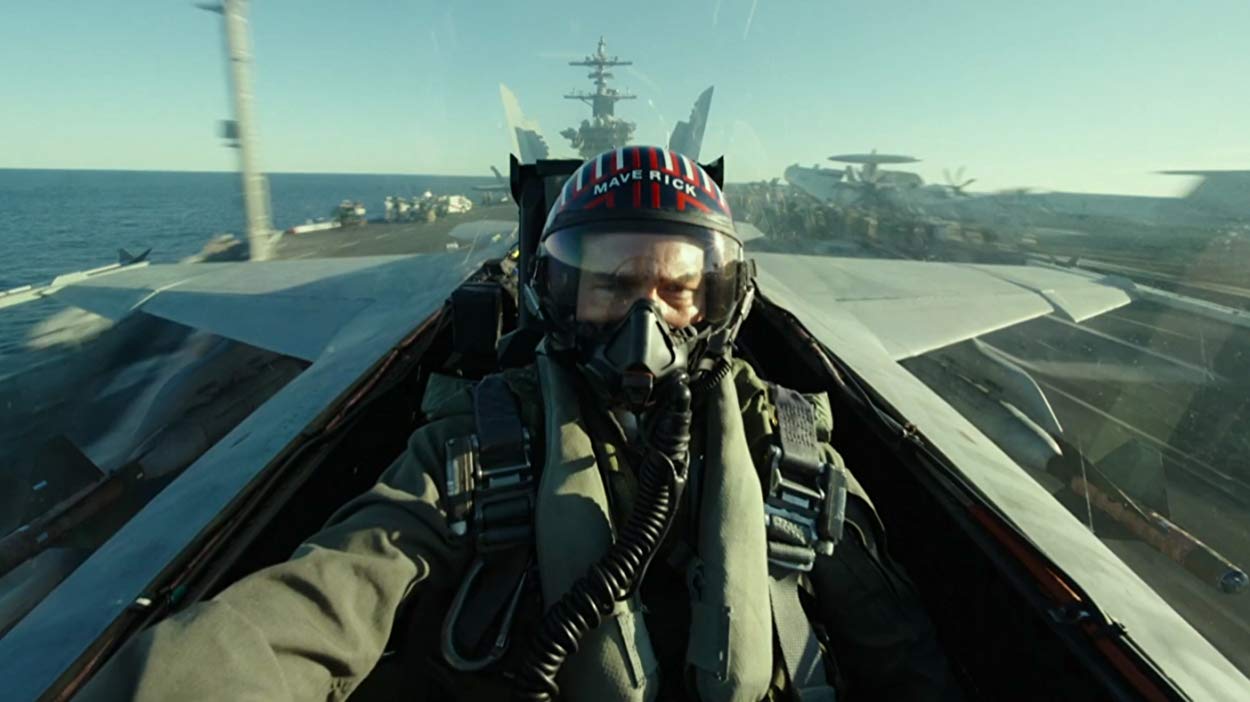 Tony Scott’s 1986 classic, Top Gun is revered by many and for a variety of reasons. Arguably, one of the best movie soundtracks of all time combined with Tom Cruise proving his leading man charm in a testosterone-fuelled romance about fast planes and the attitude needed to pilot them, Top Gun isn’t necessarily an incredible movie, but it’s got a lot of personality and a very distinct aesthetic thanks to its director’s eye for style. 36 years later and one of Hollywood’s best visual directors, Joseph Kosinski, commandeers a legacy sequel to Scott’s classic and delivers one of the most exhilarating action blockbusters in recent years with Top Gun: Maverick.

Returning to one of his most famous roles, Tom Cruise plays Captain Pete ‘Maverick’ Mitchell – a cocky fighter jet pilot who now tests out new jets for the Navy while avoiding the bureaucratic side of his job. Time has seemingly moved on but Maverick remains the same as he was back in his Top Gun days. When Tom ‘Iceman’ Kazansky (Val Kilmer) puts his name forward to prep the top graduates from Top Gun and handpick a chosen few for a dangerous suicide mission, Maverick is forced to confront and learn to let go of his past.

While Top Gun: Maverick may avoid requiring having seen the first movie, there’s something satisfying about how all of the legacy threads are handled and in some cases, tied up neatly. The Iceman and Maverick relationship in particular stands out, bringing Kilmer back to the screen for a nice reunion that cements the dynamic between the two characters in a touching scene. However, it’s the fact that the screenplay brings out new characters and explores their relationship with Maverick that exemplifies one of the defining elements of Top Gun as a franchise.

The inclusion of Goose’s son, Bradley ‘Rooster’ Bradshaw (Miles Teller), gives Top Gun: Maverick an emotional wallop to contend with. Years since his father’s death – a defining moment in both Maverick and Rooster’s lives – and the rift between the two has only grown to the point of utter disdain from Rooster towards Maverick. Decisions made in the time between Goose’s death and the events of Top Gun: Maverick resurface and force Maverick to try to patch up old wounds if there’s any hope of completing the mission at hand.

Rooster is only one of the many new pilots that Maverick must train, and while his arc is put closest to the forefront alongside Maverick’s, one of the other fascinating arcs ends up being Lieutenant Jake “Hangman” Seresin (Glen Powell). Sharing many of the same traits as Maverick, Hangman is demonstrably great at flying, understands his limits and surprisingly follows orders well – but his cockiness makes him appear more dangerous than he is. It’s the typical machismo that colored the original film, but thanks to Powell’s performance and subtle character moments, it feels wholly its own and pays off in the film’s final mission.

The mission itself also gives Top Gun: Maverick a significant improvement in structure, providing higher stakes than the original film while working with people who have already proven themselves the best of the best. Broken up into segments, every requirement of their objective feels almost impossible and even with Maverick teaching, there’s an understanding that perhaps even he can’t achieve this task. It essentially removes the way the original film felt like more of a sports movie and has now logically evolved into a blockbuster action film.

It’s an exhilarating piece of cinema mainly due to the use of practical stunts and a third act that aligns closer to a Mission: Impossible sequence if the IMF were actually all fighter pilots. Impeccably edited and with sound design, mixing and cinematography that provides a level of immersion that is almost unassailable, Top Gun: Maverick is a blockbuster film through and through. A high stakes narrative with one of Hollywood’s biggest leading men and a dedication to the craft that somehow goes unrivaled even by more expensive blockbuster films, Top Gun: Maverick feels like one of the last of its kind as digital effects even find their way in this film and peel away that level of realism when juxtaposed against the incredibly visceral practical effects.

That’s a minor issue with a film that otherwise shakes its tiny flaws off with ease. However, there are still beats that never truly land in the way they’re intended. An on-again-off-again relationship between Maverick and Penny (Jennifer Connelly) never quite feels as potent as it should, despite Cruise and Connelly having decent chemistry with each other and Penny being a strong support for Maverick. There’s just not enough there in comparison to the relationship between Charlie and Maverick from the first film.

Top Gun: Maverick also never quite looks as good as Scott’s film. Kosinski is an extremely talented visual director who can work wonders alongside frequent collaborator and DP for this film, Claudio Miranda. They’re no slouches here either, but Scott’s film was a sweaty, sun-soaked hangout movie that immersed itself in the macho energy of its characters. When we’re not watching jets in the air, Top Gun: Maverick is still a gorgeous looking movie but it fails to really distinguish itself. It also doesn’t help that there are moments when the film tries to pay homage to the original, especially in its opening credits, making it obvious how film and digital differ and can impact the aesthetic.

Still, even with minor complaints such as the film looking great but not looking unique and a relationship not being bad but not being impactful, there’s barely a moment in Top Gun: Maverick that isn’t fine tuned to perfection. It’s by no means a masterpiece, but it provides an example of what blockbuster movies could still be. Emotional storytelling and beats that feel like they weigh on their characters throughout the film, very few movies of this caliber tend to offer thoughtful ruminations on grief and responsibility while also being a direct shot of adrenaline. A somehow-superior sequel to a classic film without feeling indebted to calling back every moment, Top Gun: Maverick manages to be a profound addition to its predecessor while also being a tremendous film in its own right.