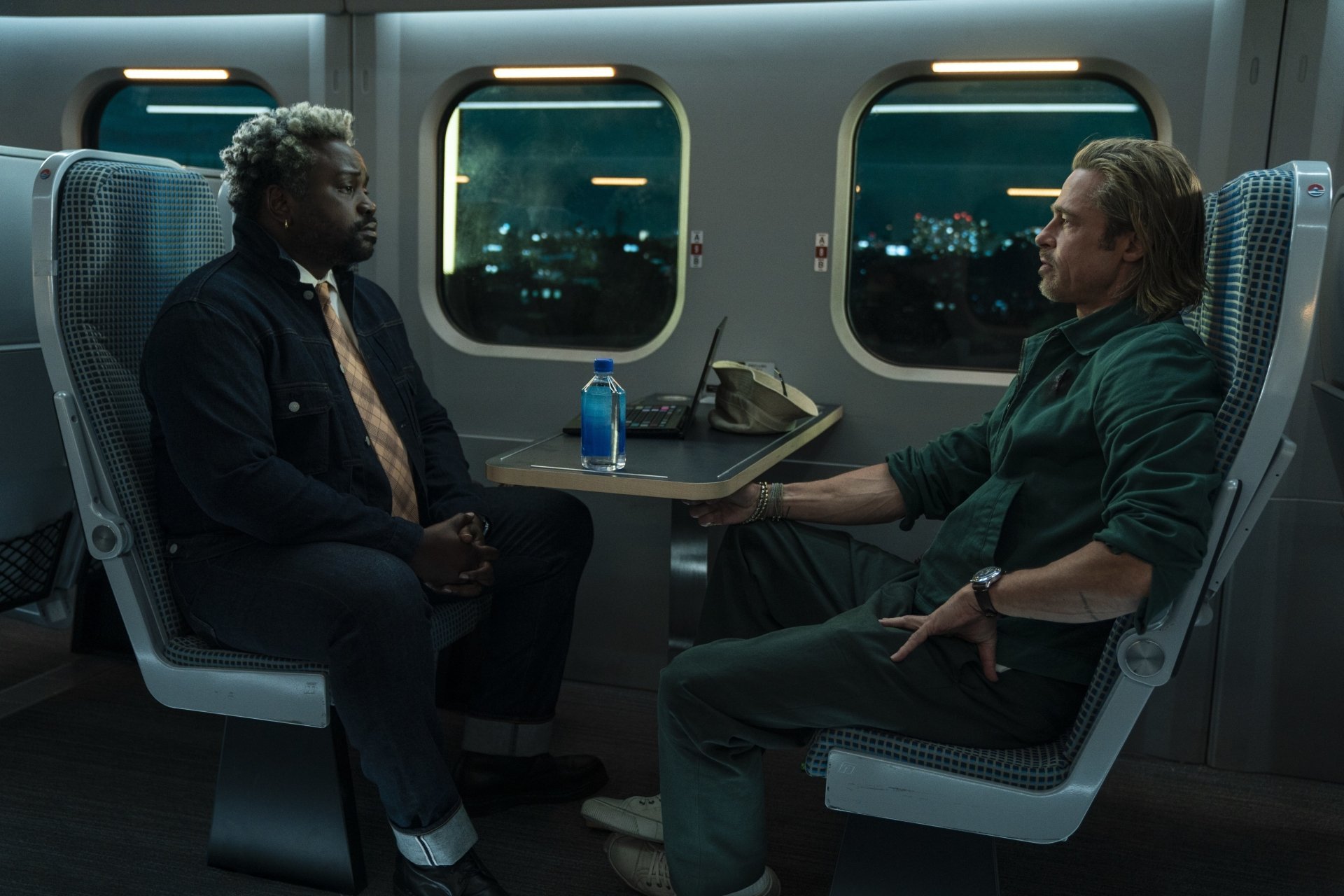 In a late climactic action sequence in David Leitch’s Bullet Train, a water bottle is made into a make-shift weapon, but before it’s used, the film oddly cuts away from the heated fight to show us how it got there in the first place. Was this tangent entertaining? Kind of. Did the film need it? Absolutely not.

Bullet Train is full of confounding stops like this, which glibly attempt to be witty and oh-so-clever but only serve to halt this ride’s forward momentum. In a film already running thirty minutes too long, sequences like this begin to have an opposite effect, inducing eye rolls in place of satisfied grins. Moreover, the “water bottle” tangent is also a showcase for the film’s true colours, as the sequence is little more than a shameless advert for Fiji water. Similarly, Bullet Train is another slick, glossy, and superficial product in Hollywood’s catalogue that thinks it’s much smarter than it really is. At least it got me thinking about Fiji water, so mission accomplished.

Brad Pitt stars as Ladybug, a trained assassin who’s become disillusioned with his violent profession but is reeled back into this life one last time by his handler Maria Beetle (Sandra Bullock). The latest job entails him collecting a briefcase from a bullet train heading from Tokyo to Kyoto. A would-be easy task is made infinitely more difficult when he finds himself competing with other assassins, all of whose objectives are somehow connected. Ladybug must not only survive but piece together why all these killers were brought here in the first place.

This plot has all the makings of a great action comedy but is repeatedly undone by an unflinching desire to pat itself on the back. It has loads of wit, but no brevity. Almost every remark or throwaway statement has a completely unnecessary backstory that eats up a notable portion of the runtime. It’s as if the film doesn’t trust its jokes to resonate on impact, so it chooses to pound them in until you’re left utterly numb. These constant flashbacks and retreads are also not seamlessly woven into the narrative, as they feel more like a clumsy afterthought that ought to have been part of an entirely different movie. When the film should move forward, it goes back, and when it relays too much it should be toning it down.

Its entirely overedited, and indicative of an experience that not only doesn’t trust its vision, but also its audience’s intelligence. As it gives us entirely too much, too often, until every quip, revelation, and set piece bleeds into one another, becoming indistinguishable from the next. In its concerted effort to be wholly memorable and provocative, it becomes utterly tiring and forgettable.

Bullet Train oozes with style, Just not an original one. Its structure, tone, and pacing are derivative of Tarantino’s non-chronological flair. The film is rife with colorful character titles, unabashed gore, and anecdotal dialogue that hopes to vibrantly replicate the filmmaker’s oeuvre but fails to bring any of its own heart, rendering its visual and stylistic ambitions flamboyant at best.

While the film quickly goes off the rails, Brad Pitt surely doesn’t. He radiates an innate charisma that elevates every moment he’s on screen. Making even the most trivial encounter wholly electrifying and exciting. He makes even a scene about an automatic toilet utterly absorbing. There really isn’t anything Pitt can’t do, as everything the film does right, has him at the centre of it.

Aaron Taylor Johnson and Brian Tyree Henry, who play Tangerine and Lemon respectively, are also clear highlights. Their infectious chemistry is a delight to behold, as they wonderfully play off each other and enliven each set piece. If there was a film focusing solely on these two, I would absolutely be the first in line to see it. Their engaging interplay is one of the few things this film does confidently well. However, besides Pitt and the dynamic duo, the rest of the cast, unfortunately, doesn’t pull their weight, as the performances range from merely serviceable to laughably distracting. With Logan Lerman and Michael Shannon’s Russian accents being borderline cartoonish.

Bullet Train’s driving engine quickly loses steam. Its runtime is never justified, especially when it chooses to prioritize odd tangents over cogent and streamlined storytelling. Despite its ambitions to be smart and inventive, it’s an entirely derivative experience, whose luster begins to fade immediately after it leaves the station.