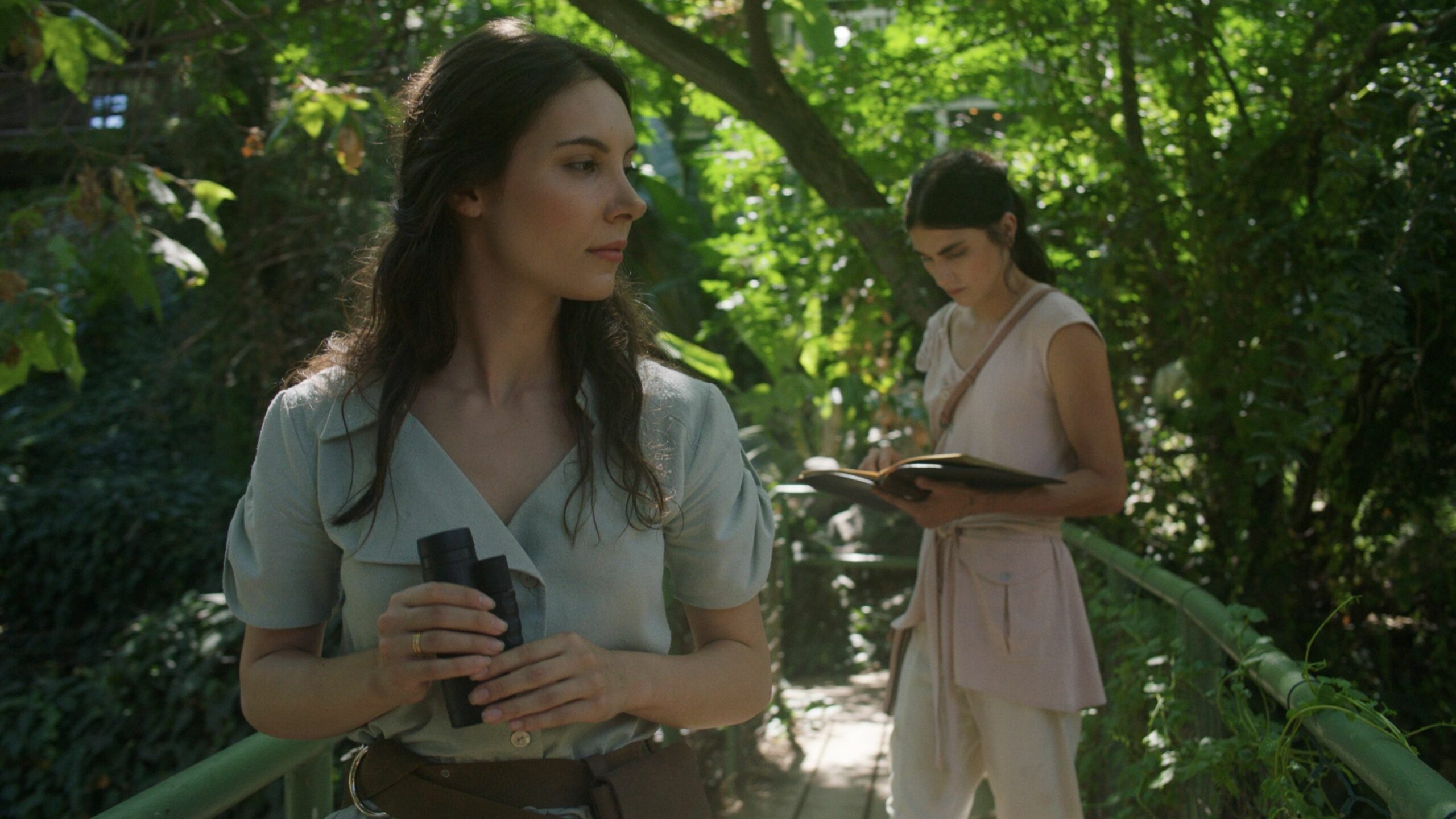 Almost feeling like the secrets of the universe might be uncovered at any moment with just the right line of questioning, Topology of Sirens is an enigmatic film that employs the obscurity of ‘90s adventure video game design to craft a unique, but obtuse experience. When the pieces of the puzzle finally click together, it’s fascinating, but more often than not Jonathan Davies’ directorial debut is earnestly trying to solve a mystery that it never really makes as fascinating for the audience as it does its protagonist.

Drawing from point-and-click adventure games as one of its inspirations, there’s an inherent eccentricity to Topology of Sirens that comes with the territory. When Cas (Courtney Stephens) discovers a hurdy-gurdy in her aunt’s old home housing a collection of microcassettes, she becomes fascinated with the circumstances that brought the two items together and what further secrets she may be able to uncover. Symbols scrawled over each tape further adding to a mystery that gets more interesting the deeper she digs, there’s never a dead end in Cas’ search for answers.

The genuine pursuit of answers to a cryptic puzzle that starts revealing itself around Cas is where Topology of Sirens’ influences become increasingly apparent. My favourite video games growing up are the pantheon of Sierra and LucasArts-developed point-and-click games that forced players to engage with everything around them because no matter how weird or insignificant it seems, it can be crucial to solving a puzzle. Throughout Cas’ adventure, she finds herself with items in her possession that seem weird but then she’ll have a conversation with someone and eventually, that person will provide further clues that help make sense of it all.

The problem with this game design philosophy being applied to film is that Topology of Sirens is a largely dialogue-free film, with the exception of key encounters that open up new paths in Cas’ journey. The decision to make Cas less of a character and more of an audience surrogate to the mystery at hand is that it depends on the mystery being interesting enough to the audience without the level of interactivity that point-and-click games allow to truly immerse yourself into it. It’s a barrier that film always struggles to get over when adapting video games, which is why it’s almost always better to lean into a well-developed character solving a mystery than a well-developed mystery being solved by anyone.

Of course, it’s not anyone and Cas is presented not just as an amateur musician but as an inquisitive one. Someone who wishes to know more and will study the theory just as much as the method. It’s a compelling character on paper, but presented so flatly and devoid of any real sense of character that she ultimately comes off as nobody – a placeholder waiting for someone to either flesh out the character more fully or replace them entirely. While Stephens does a well enough job keeping Cas feeling like a real human, the screenplay turns her more into a means of moving the plot forward.

Topology of Sirens does eventually give way to a fascinating exploration of history, nature, and music that wraps up its puzzling narrative with an equally obtuse solution that works really well. The way the environment and characters all seem to serve a purpose, even when they don’t initially, would be considered great writing in any adventure video game. A world around us that finds itself frequently obfuscated by mysteries and the unknown, Davies is finely attuned to the way the world and its many machinations work together to create wonders.

However, it’s a trek to get to the film’s ultimate wonder as Topology of Sirens’ languid pacing and blank protagonist fail to spur any momentum when the pieces begin coming together. There’s a genuine sense of discovery, but Davies’ screenplay lacks emotion and presents itself more like watching a no-commentary playthrough of a game. It’s occasionally riveting, but only when it works, otherwise you’re watching someone meander through a puzzle you just want to explore and discover yourself.

What to Do with the Dead Kaiju? Squanders a Compelling Premise